To mark the anniversary of the assassination of President John F. Kennedy on Wednesday, MSNBC’s radical Joy Reid put out a series of tweets fawning over how “the Kennedys occupy a special place in our national consciousness.” According to her, those “mythical” stories about the Kennedys were part of what held the country together and elevated us.

In a morning tweet (pictures below), she opined about how “JFK had a roguish gallantry. Jackie O had the glamour and pathos of a Hollywood star. RFK had the seeds of goodness and greatness. Teddy chased redemption. Americans love those kinds of narratives.” 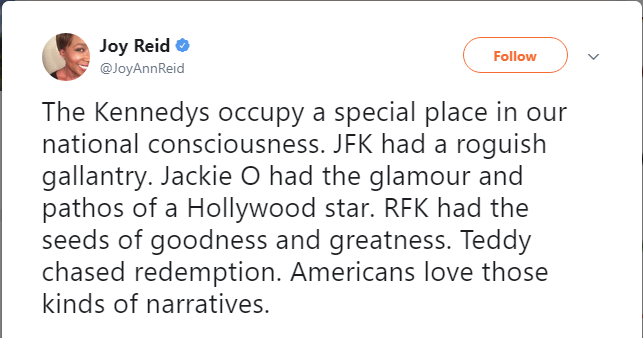 Reid’s comments were disgusting when you realize she was romanticizing politically shady philanderers and a man who got away with killing an innocent woman. It’s unclear how “Americans love those kinds of narratives” as she claimed.

But Reid wasn’t done drooling over the Kennedys’ twisted legacy. “America is a land of myths. Those myths are what knit a disparate people together,” she continued in the second tweet. In her follow up tweet (pictured below), she bemoaned how our current leadership didn’t match up to her democratic idols. 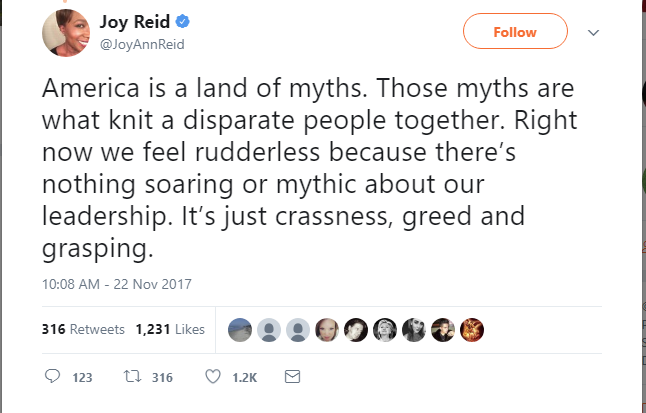 Clearly, she had completely disregarded just how highly President Trump’s supporters respected him. To many of them, he represented opportunity and a chance for something greater for themselves. But apparently, she couldn’t understand that.

“Obama gave us that mythical quality too, particularly with his soaring rhetoric, which I suspect is why the Kennedys embraced him,” she wrote in the third tweet. “It may seem weird but America needs that. Presidents typically aim for it — the uniting power of mythmaking.”

But for all of Reid’s pontificating about the greatness of Democrat myths, the irony was, myths are just that: Myths, make-believe fairytales with nothing magical about them. And those fairytales were something she can’t get enough of and was an ace at pushing.

In an article she wrote for The Daily Beast, Reid continued the Democratic myth that Justice Clarence Thomas was a “sexual raptor.” And at the same time, she was minimizing the sexual harassment and rape charges against former President Bill Clinton. Reid also enjoys falsely claiming that Republicans were out to take the right to vote from African-Americans. Again, nothing but fanciful myths.