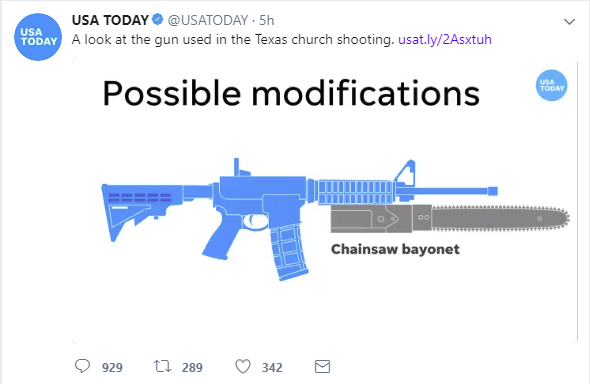 In a tweet that expertly demonstrated why media credibility was in the toilet, the gun-phobic USA Today claimed on Wednesday that an optional attachment for the Texas mass shooter’s Ruger AR-556 was a “chainsaw bayonet.” And while the internet proceeded to mock them mercilessly, they were 100 percent serious and stood by their ridiculous claim of “chainsaw bayonets” being widely available for gun owners.

In a tweet that read “A look at the gun used in the Texas church shooting,” the paper posted a video saying it was “What we know about the Ruger AR-556.” The video was primarily about stirring up fear for all the scary attachments that were available for the rifle and others like it, a liberal staple following a mass shooting.

Some of the attachments they noted for what they dubbed as the “base model” included a buttstock, rear and front sights, the handguard, and … the TRIGGER. From there they delved into the more exotic options, reporting that “AR-15 style rifles have many aftermarket options – some common, some rare.” Those attachments included a 100 drum magazine, an underbarrel 12-gauge shotgun, a six-position telescoping buttstock, and the mystical “chainsaw bayonet.”

A look at the gun used in the Texas church shooting. https://t.co/xdxIf5fR77 pic.twitter.com/sUY1mCCLZC

But where would USA Today get the idea that such an attachment was widely available and widely used? Trying to find such a device on the internet leads to results largely made up of the popular video game series Gears of War, where the super-muscular heroes use rifles with chainsaws to slay subterranean terrors. There were also plenty of DIY projects for such devices and there was a small company that claimed to sell them, but they’re marketed as a way to kill zombies.

The internet was the internet it and didn’t hold back as the paper was put through the wringer on twitter. #ChainsawBayonet was trending with image after image from people who photoshopping other ridiculous attachments onto USA Today’s AR-15 image. Such attachments included a lightsaber, a taco, a little corgi, (my personal favorite) 10 smaller AR-15s, and failed presidential candidate Hillary Clinton.

Proving that the criticism went completely over their head, USA Today put out a second tweet to clarify their first one, saying: “To clarify, the video shows both the shooter’s modifications, as well as other possible modifications. The shooter did not use a chainsaw bayonet.”

There really was no reason for them to “clarify” that the shooter did not use a “chainsaw bayonet,” because their video actually reviewed what horrific attachments the shooter had on his rifle. Those attachments included an aftermarket sight, a flashlight, and a two-point suspension sling, among others.

USA Today’s fear-mongering about the widely popular AR-15 (and other guns like it) preys on those who don’t spend time around guns and don’t understand the purpose of some of the attachments. It breeds a misunderstanding about the firearms, those who own them, and the safety benefits provided by some of the attachments. That fear-mongering and misunderstanding were why we had states that banned adjustable stocks, detachable magazines, muzzle breaks, and suppressors.