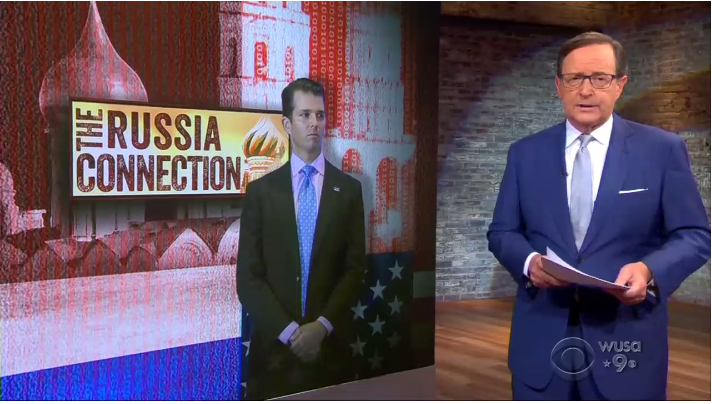 The American political world was rocked Tuesday when Donald Trump Jr. released a series of e-mails that showed he was approached by and met with, someone who appeared to have ties to Russia and claimed to have damaging information about Hillary Clinton. The shocking revelation dominated the evening news coverage of the Big Three Networks (ABC, CBS, and NBC). Of the total time spent on news (minus commercials and teasers), the e-mails commanded 54 percent of the total coverage on the three networks.

Combined, the networks aired 57 minutes and 18 seconds worth of news. From that, they spent 31 minutes and 10 seconds talking about Don Jr.’s e-mail correspondence in some fashion. But when analyzing each network individually, the coverage disparities were even more striking.

CBS Evening News had the largest imbalance. The network spent 12 minutes and 57 seconds talking about Don Jr. while devoting a minuscule 5 minutes and 44 seconds for all other news stories. That means that CBS dedicated almost 70 percent of its coverage to Don Jr.’s e-mails.

That’s despite the fact that correspondent Julia Goldman reported that: “Collusion isn't illegal, but conspiracy is…the e-mails alone don't necessarily prove conspiracy, but they raise questions that could put Mr. Trump and his inner circle in legal jeopardy.”

ABC’s World News Tonight had the next largest gulf in coverage time. They gave 10 minutes and 31 seconds for the e-mails while doling out 7 minutes and 15 seconds for all other news stories. This added up to almost 60 percent of their total coverage going to Don Jr.

Meanwhile, NBC Nightly News was the only network whose coverage numbers were the inverse of its competitors. Anchor Lester Holt and company spent only 7 minutes and 42 seconds talking about Don Jr.

In comparison, they allocated 13 minutes and 9 seconds to other topics they wanted to cover, which meant only 37 percent of their coverage was of the e-mails. Further, they were also the only network to report on Senate Majority Leader Mitch McConnell postponing the Senate’s recess for another two weeks.

The Don Jr. e-mails were important. That’s not in doubt. But the obsession was over the top, especially since much of the coverage was just the rehashing of their old Russia coverage up until the e-mail release Tuesday morning. It was also largely populated by the speculation of partisans claiming the e-mails showed everything from nothing, to collusion, to treason.

The e-mail obsession of both ABC and CBS meant they couldn’t find the time to report the other political news of the day, most notably the postponed recess of the Senate. But even though NBC did mention the recess, they pitched it as caused by the battle over the GOP health care bill.

None of the networks reported that McConnell was partly pushing back the recess because of Senate Democrats obstruction with federal nominations. The Fox News Channels’s Special Report did mention this, however.

“Of 197 presidential nominations to agencies, the Senate has confirmed only 49. And only two of the President's 23 judicial nominees have been confirmed,” stated Correspondent Mike Emanuel. “White House officials are singling out Senate Democratic leader Chuck Schumer for leading what they call an ‘unprecedented campaign of obstruction.’"

While ABC couldn’t find the time to report about the Senate Republican health care bill or Democratic obstruction, they did manage to squeeze in a report at the end of their show touting a family of hippos at the Cincinnati Zoo. Only the highest priorities for the Big Three Networks.