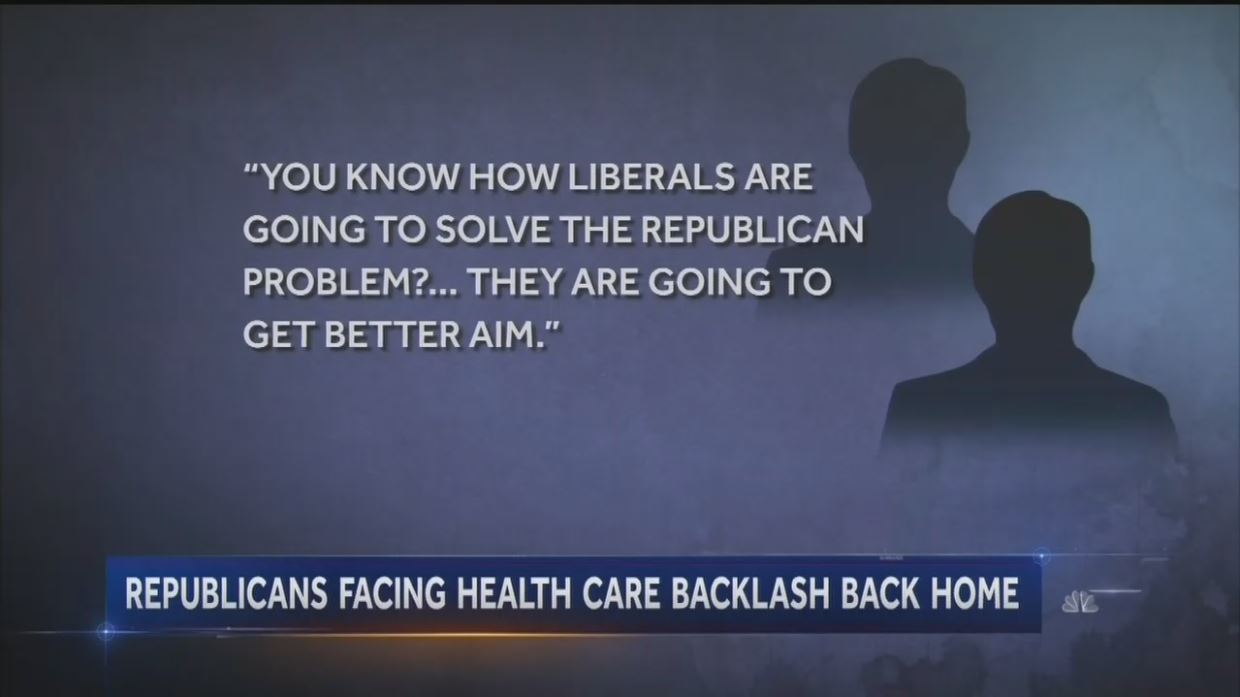 Red flags went up quick at the Tucson, Arizona office of Republican Senator Jeff Flake on Thursday when one angry leftist claimed that shooting all of the opposition was the way to solve “the Republican problem.” The leftist protestor also brought up the shooting of Majority Whip Steve Scalise and was arrest by police a short time later. This disturbing incident went unreported on both ABC and CBS during their evening news programs.

Correspondent Kasie Hunt became the only network news reporter to mention the threat when she brought it up during her segment on NBC Nightly News:

Outside of Republican Senator Jeff Flake's Tucson office, two people arrested. A staff member alleging one alluded to the shooting of Minority Whip [sic] Steve Scalise. Saying quote: “You know how liberals are going to solve the Republican problem? They're going to get better aim.”

Hunt’s report was mostly about the outrage Congressional Republican were facing at town halls in regards to the Senate health care bill during their July recess. CBS Evening News also covered the angry protests. But instead of reporting on the threat to Republicans, they highlighted people who staged a fake town hall for Paul Ryan where they talked to an empty chair.

What NBC reported about the incident was just a small piece of what happened Thursday morning. According to The Hill, the man told a Flake staffer that “You know how liberals are going to solve the Republican problem? They are going to get better aim. That last guy tried, but he needed better aim. We will get better aim."

The Hill also reported that the protestor was a 59-year-old man named Mark Prichard. “After telling him that he was not allowed back on the property, police said Prichard ‘made a point’ of defying the deputies' orders, leading to his arrest,” they wrote. “He was also charged with making "threats and intimidation" based on statements made by Flake's staff after his arrest.”

The second protestor, 70-year-old Patrick Diehl, was arrested after he “tried to force his way through the door while a staffer was handing out promotional materials.” “Police say no force was used in the arrests, and the protests remained largely peaceful throughout the day,” The Hill added.

With all the conversations about the need for civility politicos had in the wake of the shooting of Congressman Steve Scalise, it’s important that these kinds of actual threats are called out and condemned. It’s a shame ABC and CBS felt that the incident didn’t warrant any time during World News Tonight or CBS Evening News.

KASIE HUNT: Dozens of protests around the country. Outside of Republican Senator Jeff Flake's Tucson office, two people arrested. A staff member alleging one alluded to the shooting of Minority Whip [sic] Steve Scalise. Saying quote: “You know how liberals are going to solve the Republican problem? They're going to get better aim.” Republicans struggling to make good on a simple campaign pledge to repeal and replace ObamaCare