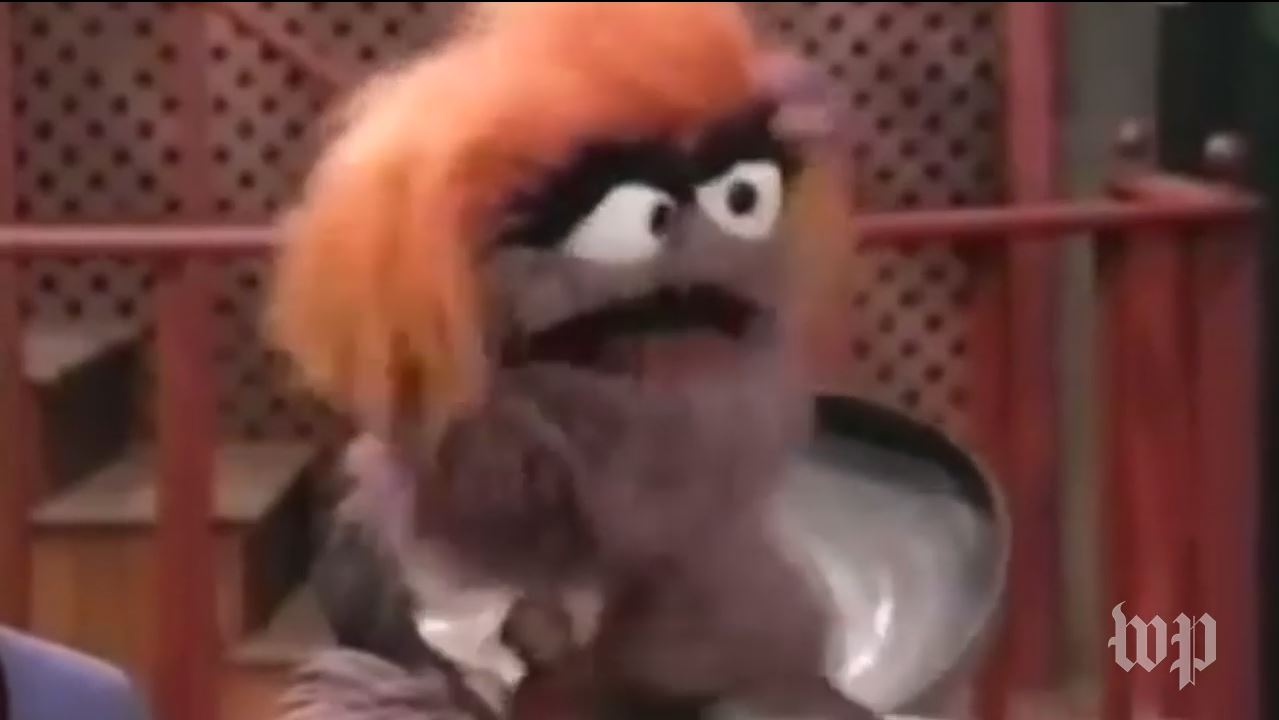 Following the release of President Donald Trump’s new federal budget last week, the liberal media was up in arms that Trump would dare to defund the Corporation for Public Broadcasting. On Sunday, a CNN anchor asked the MRC’s Dan Gainor if it was “conservative revenge.” But The Washington Post on Monday had an even more ridiculous explanation. “Trump wants to defund PBS. ‘Sesame Street’ brutally parodied him for decades,” read the headline to an arts and entertainment article by Avi Selk.

“You should know a couple of things before we embark on a recap of “Sesame Street’s” surprisingly vicious takedowns of Donald Trump, which span three decades leading up to his political rise,” he hyped as he laid the groundwork for his conspiracy theory:

First: Trump is most often depicted as a grouch — unpleasant monsters who base their culture and economy around garbage. So when “Donald Grump” appears in a 2005 episode as a badly toupeed-muppet “whose name equals trash,” that’s not necessarily an insult.

The other thing is that Trump, as president of the United States, wants to end public television funding that created “Sesame Street” — more often known for lessons on counting and sharing than biting satire.

“We know of nothing to suggest any link between these skits and Trump’s budget proposal,” he cautioned, but that didn’t stop Selk from trying to make those connections. He also touted that Sesame Street had survived many attempts to slash or defund its parent company. But Selk bizarrely acted as though it was a personal vendetta against the puppets, stating, “And because the show now airs on HBO, Trump’s plan is unlikely to destroy Sesame Street, as Grump tried so hard to do.”

The article highlighted the three episodes where “Ronald Grump” made an appearance. “He first appears in an episode in the late 1980s — a grouch in a tacky fedora, knocking on Oscar’s iconic trash can[sic] to offer a deal,” to build “Grump Tower,” Selk wrote. He then touted that “Sesame Street gets politically woke” when the show had Big Bird lead a protest against the construction of a new “Grump Tower” in 1994.

Selk seemed to get great enjoyment from the show’s parody of Trump and reported that “In 2005, his likeness returned to Sesame Street as “Donald Grump”: a grouch again, but now in an orange wig — and famous among muppets for his reality show and spectacular wealth.” He also claimed that the episode depicts how “Grump pits the muppets against each other. And someone sort of gets deported.” A clear slight against President Trump. But the deportation he spoke of was Elmo losing a competition even though he “worked the hardest and won all the events. In a fit of cruelty, Grump cut him anyway.”

The article did not provide concrete evidence that the satire was the reason for the budget cut to the Corporation for Public Broadcasting. Selk admitted that it was never meant too. It’s clearly meant to draw attention to the shows’ past parodies and finds great humor in the parallels it creates. Selk seemed to be looking forward to more appearances of “Ronald Grump” since ended the piece noting that “’Sesame Street’s’ parent company has not yet responded to questions about Grump’s origins, and whether he might return during the Trump administration.”