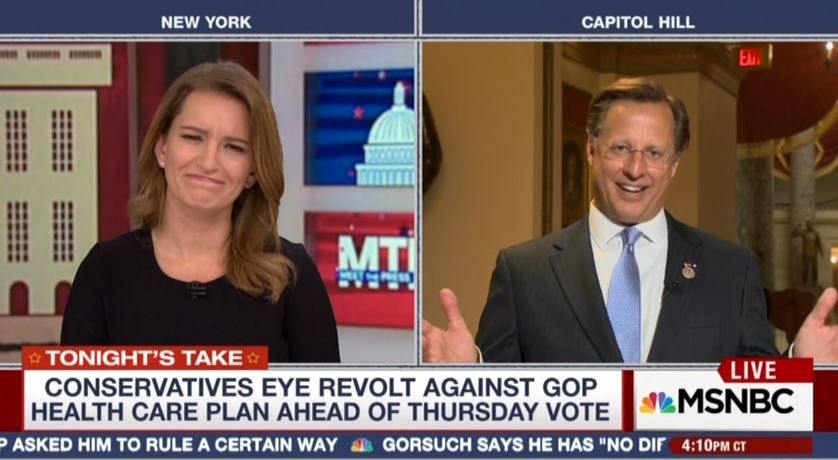 During an interview with Virginia Congressman Dave Brat on Tuesday, MSNBC’s Katy Tur got embarrassingly schooled on the fact that liberal media bias is a measurable fact. “Well, it’s hard on my side of the aisle. The press tends to be kind of like the faculty lounge where I taught for 20 years,” Brat joked, “I think 90 percent or so tend to be fairly Democratic. So, we always feel, you guys are kind of kind of coming after us.”

“Oh, really? Donation tracks,” she quipped, sounding unamused and dismissive that such data was even available. “The donations of the media overwhelmingly went to Hillary and the Hillary foundation. Just follow the trail,” Brat noted. And he’s right!

According to a Media Research Center study of donation data provided by OpenSecrets.org, “The most dramatic financial favoritism is shown by employees of The New York Times: since January 1, 2008, 68 employees of the Times have donated exclusively to Democrats or Democratic PACs to just three employees who donated to a Republican.” The study also found that at Tur’s own network (NBC), there were seven donations to Democrats versus a big fat zero for Republicans.

In a special report from 2004, the MRC also found that:

None of the surveys have found that news organizations are populated by independent thinkers who mix liberal and conservative positions. Most journalists offer reflexively liberal answers to practically every question a pollster can imagine.

And beyond the journalists themselves, the public is highly aware of the media’s preference for Democrats. After the 2016 election, an MRC/YouGov poll found that “8 in 10 (78%) of voters believe the news coverage of the presidential campaign was biased, with nearly a 3-to-1 majority believing the media were for Clinton (59%) vs. for Trump (21%).”

And it wasn’t just people on the right that believed that to be true. The poll also found that “Even 1/3 (32%) of Clinton voters believe the media were “pro-Clinton.””

This isn’t the first time Tur had been proven wrong about simple facts. At the beginning of March, she argued with Congressman Chris Stewart that “I don't think any news organization actually claimed that there were direct ties between the Trump campaign and Russian spies.” When that was, in fact, the case. She also denied that Obama had even promised Vladimir Putin to be “more flexible” with foreign relations. ““I'm sorry, I don't know what you're referring to, Congressman,” she told Congressman Francis Rooney.

KATY TUR: What do you think of a White House that is so easily seduced by theories that are so hard to prove?

DAVE BRAT: Right. Well, it’s hard on my side of the aisle. The press tends to be kind of like the faculty lounge where I taught for 20 years. I think 90 percent or so tend to be fairly Democratic. So, we always feel, you guys are kind of kind of coming after us.

BRAT: No, I think it is. You can look at the donation tracks. I’ve done that. I’m an economist. I don’t make up facts.

BRAT: Yeah. No. The donations of the media overwhelmingly went to Hillary and the Hillary foundation. Just follow the trail. It’s all right there. That’s just an aside though right? But both sides need to clean up their act. Just wait till we get the evidence then make the accusations.

But it is hard for our side of the isle. For example, I had some fake news thrown at me by Huffington Post, etcetera. I had 500 meetings with my constituents over two years. Now the new narrative coming out of the Washington Post etcetera, is “Where is Dave?” Right, they just make up these hit pieces. It's fake news.

BRAT: Because it’s fake right. I just—I had 500 meetings with my constituents for two years. And they say “where’s Dave?” Meaning he’s disappeared in two weeks since Trump won the presidency.