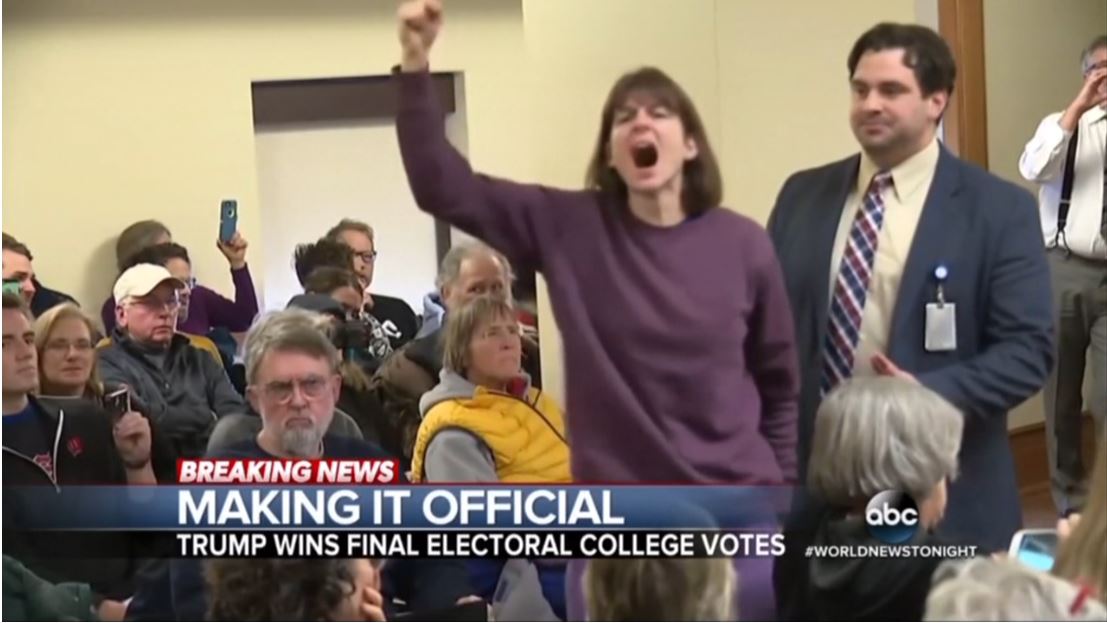 As the Electoral College wrapped up its proceedings across the country Monday, it was abundantly clear that President-Elect Donald Trump had exceeded the 270 votes needed to win and that the efforts of his liberal opponents were sundered. On ABC’s World News Tonight that evening reporter Cecilia Vega highlighted the efforts of those who set out disrupt the process. “It did not come without some fiery moments today,” hyped Anchor David Muir leading into the report.

“A chaotic scene in Wisconsin today,” reported Vega, “Protesters shouting down electors as they cast their votes for Donald Trump.” “Everyone one of you, you’re pathetic! You don't deserve to be in America,” a woman shouted as she was being escorted out by police. “This is my America! My America,” she continued.

Vega played video of a crowd of protesters interrupting the electors in Pennsylvania with chants of “Shame on you! Shame on you!” It was followed up with cell phone video of a man who seemed to be failing in his attempt to energize his fellow protester in Ohio, as he tiredly declared, “This is what democracy looks like.”

“As the Electoral College convened in state houses across the country, Trump's opponents making a last ditch attempt to keep him from the White House,” Vega explained. And if that defeat wasn’t enough, Democratic nominee Hillary Clinton actually lost more Electoral Votes than Trump did. “Some of those electors who were supposed to vote for her, instead voted for Republican Colin Powell,” announced Vega, sounding stunned, “in a Hail Mary attempt to deny Trump the presidency.”

But the ABC reporter seemed to relish the small victories. One being the fact that former President Bill Clinton casted his New York electoral vote for his wife, and the swipe he took at the president-elect. “The former president telling a local newspaper that Trump, quote, ‘Doesn't know much, but one thing he does know is how to get angry white men to vote for him,’” she announced.

She reiterated the Clinton campaign’s efforts to have the electors briefed by US intelligence officials about claims that Russia intervened in the election to aid Trump. “But that briefing didn’t happen,” she whined, before touting Saturday Night Live’s skit slamming Trump as a gift to Russian President Vladimir Putin.

ABC’s highlight reel of radical leftist protesters attempting to derail America’s political system is highly hypocritical, since before the election they were smearing Trump for saying he would not accept the results of the election. It’s very much a “do as I say, not as I do” attitude that shows a great disrespect for people who voted Trump into office, and something they would almost certainly would condemn if Clinton had won the election.

DAVID MUIR: Back here at home tonight, and its official. Electors across this country, putting Donald Trump over the 270 electoral votes he needs to become the president in January. It did not come without some fierily moments today. And here in New York, one elector who cast his vote for Hillary Clinton speaking out now about the election. Her husband, former President Bill Clinton. ABC's Cecilia Vega at Trump Tower tonight.

PROTESTER: Everyone one of you, you’re pathetic. You don't deserve to be in America.

VEGA: Protesters shouting down electors as they cast their votes for Donald Trump. This woman hauled away by police. 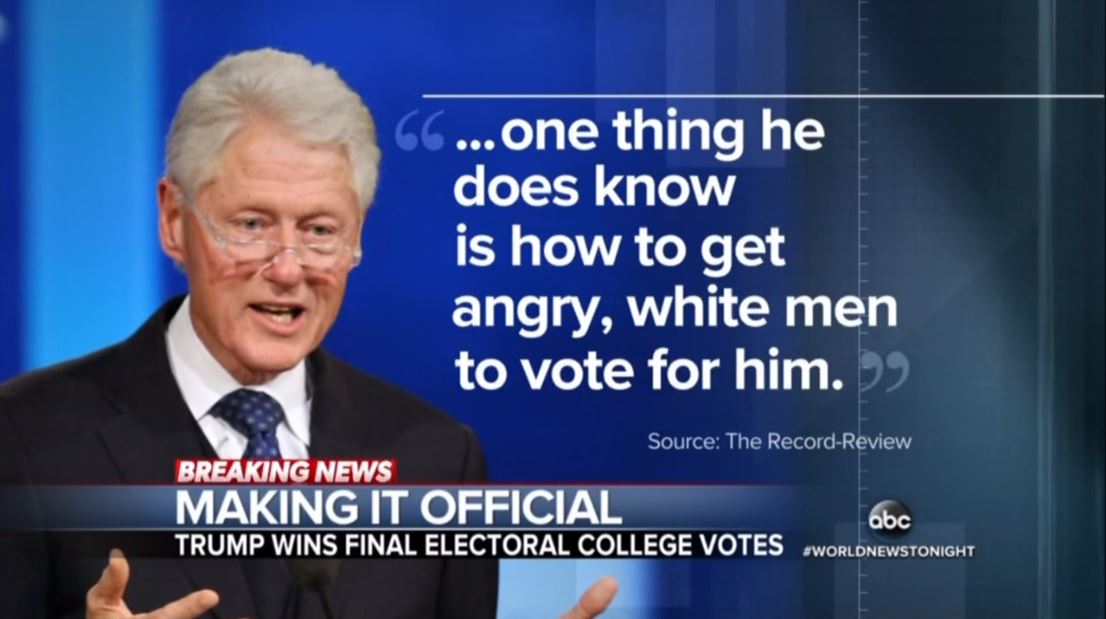 PROTESTER: This is my America! My America!

VEGA: The same in Pennsylvania.

VEGA: As the Electoral College convened in state houses across the country, Trump's opponents making a last ditch attempt to keep him from the White House.

VEGA: But now, the unofficial tally is in. Trump reaching the 270 votes needed. Hillary Clinton, who won the popular vote by nearly 3 million, today, lost a handful of electoral votes. Some of those electors who were supposed to vote for her, instead voted for Republican Colin Powell; in a Hail Mary attempt to deny Trump the presidency. The president-elect, who once blasted the Electoral College as a “disaster for democracy,” now praising the system.

DONALD TRUMP: I never appreciated it until now, how genius it was, what they had in mind.

BILL CLINTON: I've never cast a vote I was prouder of. 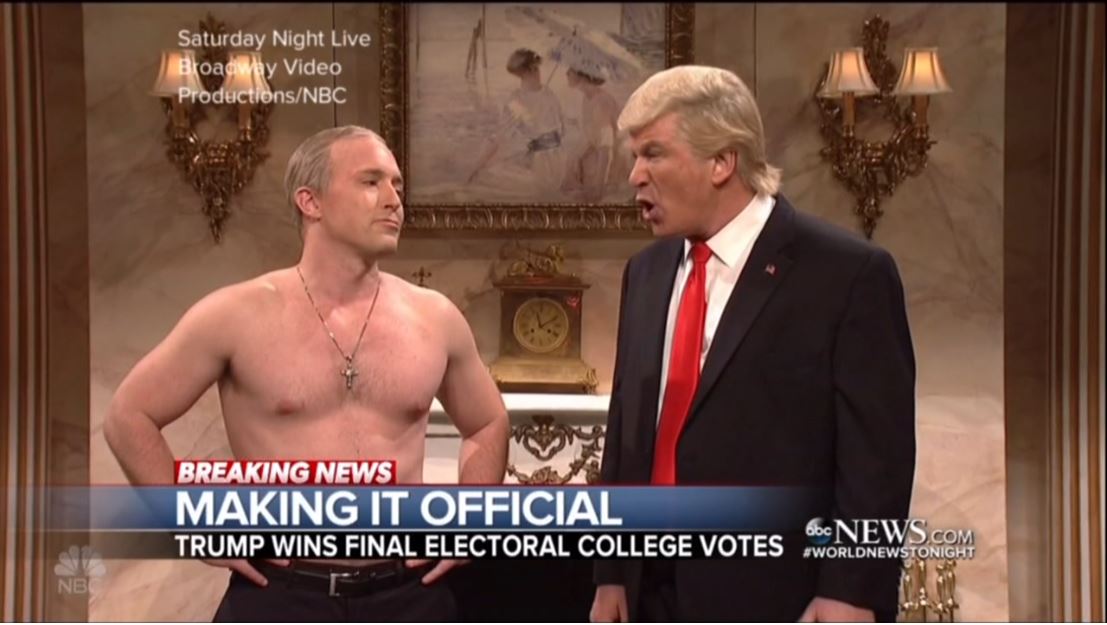 VEGA: The former president telling a local newspaper that Trump, quote, “Doesn't know much, but one thing he does know is how to get angry white men to vote for him.” Team Clinton called on intelligence agencies to brief electors on Russia's interference in the election.

JOHN PODESTA: And the electors have a right to know what the answers are.

VEGA: But that briefing didn’t happen. While SNL is not letting up on the Russian connection.

ALEC BALDWIN [as Trump]: Vladimir, I'm sorry, I didn't know you were coming. I do not have a gift for you.

BECK BENNETT [as Putin]: Please, Mr. Trump, you are the gift.

MUIR: And Cecilia Vega joins us now, live tonight, from Trump Tower. Cecilia, President-Elect Trump will be sworn in one month from tomorrow now after the electors did their work today. In the meantime, there's a headline out there today that Mr. Trump will be bringing some of his own security team to the White House?

VEGA: David, the president-elect's team confirms that his long-time head of security will be going with him to Washington. Of course, the responsibilities for protecting the president do fall to the Secret Service, but David, this would be a rare move.

MUIR: Cecilia Vega with us front of Trump Tower. Cecilia, greet have you.