Twitter is a great place for journalists to vent and to leak their liberal bias for all to see. And exactly that happened Tuesday night when CBS Boston Freelance Writer David Leavitt tweeted, “’Trump died sleeping’ #CalmMeDownIn3Words.” Leavitt’s tweet has garnered over 900 retweets, more than 2,300 likes, and almost 2,000 responses, many of them negative.

As outrageous has Leavitt’s tweet was, CBS Boston’s public relations kneejerk reaction was flat out ridiculous. The local news outlet responded to more than 100 irate twitter users, first proclaiming, “Mr. Leavitt is not a current or former employee of WBZ-TV or CBS. His comments do not reflect the views of our station.” Before changing it to, “Mr. Leavitt does not and never has worked for WBZ-TV or CBS.” It’s noteworthy that they argued that he does not “reflect the views” of the network, since they claimed he never worked for them. 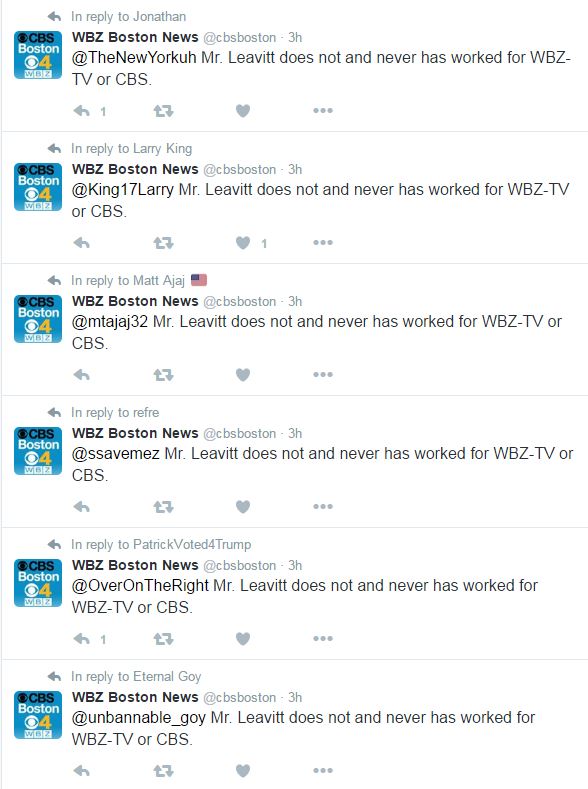 But despite the network’s passionate denial that Leavitt “does not and never has worked for WBZ-TV or CBS,” his finger prints are very much present on their website. CBS Boston’s website actually has an author page dedicated to his work, which displays nine articles he has written for them.

As much as CBS Boston wants to deny Leavitt’s involvement with their news outlet it’s impossible for them to refute. Even though the last article he had written for CBS Boston was in September 8, 2015, it means their claim he has “never” worked for them is a lie.