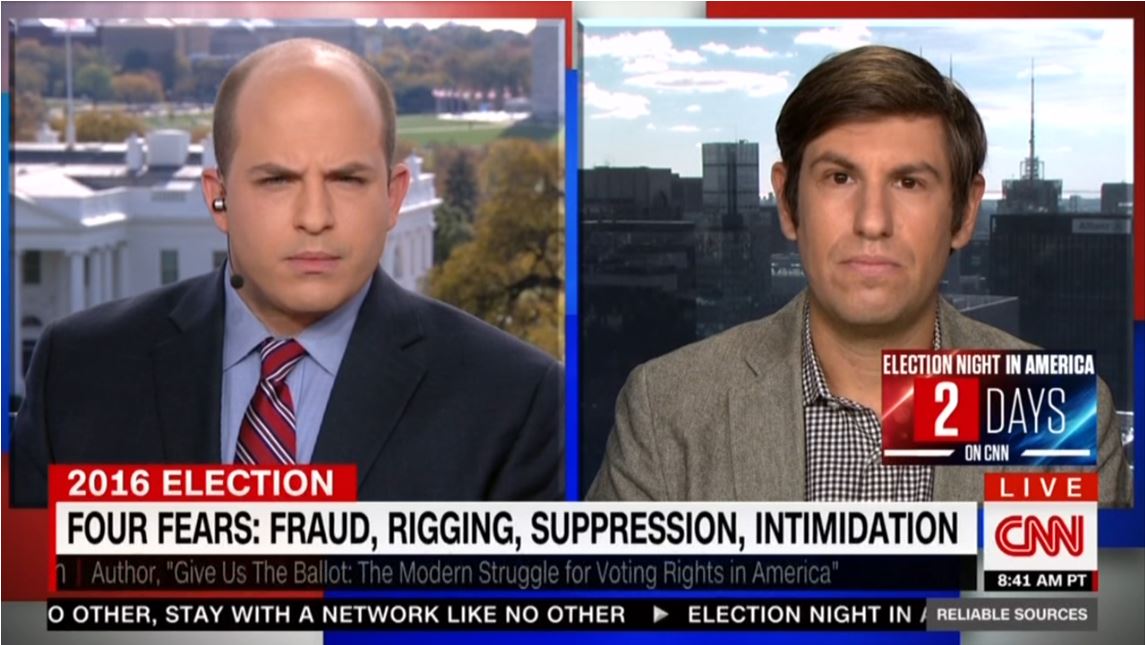 CNN’s Brian Stelter, who once called the idea of liberal media bias “false” and “Ludicrous,” set his sights on Fox News during his Sunday show Reliable Sources and chastised the news outlet for daring to report on occurrences of voter fraud. “Let's look at Fox News from yesterday morning. This disturbed me,” Stelter told his guest Ari Berman from the leftist publication The Nation, “The banner says "Running rampant," the clear implication here is that voter fraud is happening all over the place, all the time.”

“No, it's not. And it's really, as you mentioned, extremely irresponsible for Fox News to be saying this,” scolded Berman. He then rattled off statistics about how a person was more likely to be struck by lightning than witness in person voter fraud. Berman did admit that it does happen on occasion, but the only instance of it he could think of was committed by a Republican. “We saw, for example, the first voter fraud conviction in Iowa, which by the way, was done by a Trump supporter,” he stated as proceeded to gleefully list off massive punishments they were facing.

While Fox News’ banner was driving Stelter up the wall, what the network was reporting was actually quite shocking.  Fox and Friends Saturday brought on The Washington Times’ Kelly Riddell to discuss recent instances of voter fraud.

One example was a man in California who found 83 unused mail-in ballots outside the home of his elderly neighbor, each envelope had a different name on it. The local police department didn’t want anything to do with it and sent the man to the post office, who all didn’t seem to care either. Eventually they were brought to the state registrar’s office and it’s now being investigated.

Riddell also noted two cases of voter fraud in the swing state of Florida, where one person falsified voter registration forms because she didn’t want to go door-to-door. Another woman, who was opening mail-in ballots for the Elections Department in Miami-Dade, started checking off her preferred candidate for mayor on unfinished ballots. According to Riddell both women are now facing felony charges, and they are the ones who have been caught in the act.

It’s not surprising that Stelter would write-off Republican concerns of voter fraud when he leans to the left himself. When Hillary Clinton had her health scare on 9/11 Stelter sprinted to spin it as a conspiracy theory. While on the other hand, he was quick to blame the firebombing of a North Carolina GOP campaign office on Trump’s “over heated” rhetoric.

BRIAN STELTER: Let's look at Fox News from yesterday morning. This disturbed me. It was a banner on the bottom of the screen talking about voter fraud. The banner says "Running rampant," the clear implication here is that voter fraud is happening all over the place, all the time. Is it?

ARI BERMAN: No, it's not. And it's really, as you mentioned, extremely irresponsible for Fox News to be saying this. We have lots of studies. We have lots of data that shows that voter fraud is a very, very small problem in American elections. And that voter impersonation, which is a type of fraud that a voter ID law would stop, for example, is extremely rare. That you're more likely to be struck by lightning, for example, than to impersonate another voter at the polls. So, voter fraud is a very small problem.

Does it occur sometimes? Yes, but when it occurs it is usually caught and it does not swing elections. We saw, for example, the first voter fraud conviction in Iowa, which by the way, was done by a Trump supporter, but leave that aside. The point was, when someone voted twice in Iowa, they were caught. The system worked like it was supposed to. It got rid of bad behavior, and now that voter is facing felony charges and $10,000 fine and five years in jail.

STELTER: All right, voter fraud on the one side. Vanishingly rare.