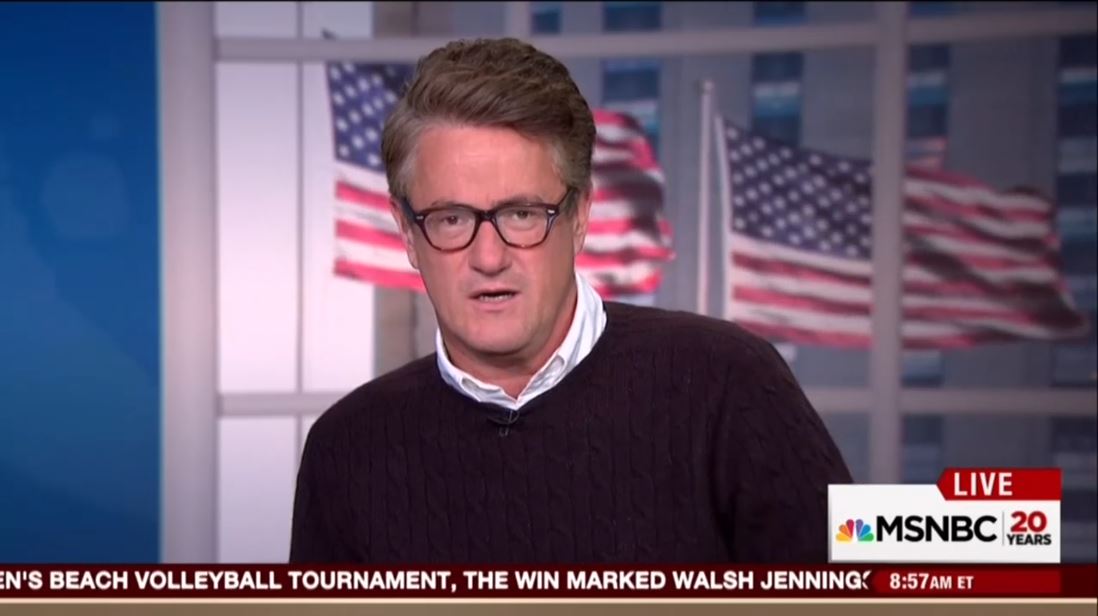 Morning Joe co-host Joe Scarborough brought on Time magazine Editor Nancy Gibbs to discuss the publication’s latest cover story about toxic environments on the internet. “I think we are all probably first amendment extremists about, yes, part of our life is that people will call us stupid and idiots and that's fine,” stated Gibbs, “But at what point do you not defend speech that suppresses speech?” Ironically the writer of the piece has his own history of trolling, and so does Morning Joe and MSNBC.

But anyone who has watched MSNBC in the past, or present, knows they have a long history of such vitriolic language being used on live television. NewsBusters readers might remember back in 2013 when MSNBC personality Martin Bashir exclaimed that he wanted someone to defecate in Governor Sarah Palin’s mouth. Bashir’s comments resulted in him resigning from the news outlet.

And then there was former MSNBC personality Ed Schultz who infamously screamed in 2009, “The Republicans lie! They want to see you dead! They’d rather make money off your dead corpse! They kind of like it when that woman has cancer and they don't have anything for her.”

Scarborough also whined about how Mika Brzezinski has been treated online saying, “I can tell you over eight or nine years of seeing what Mika gets online. I can tell you it is 100 times worse for women. And it has to do with appearance…” But Brzezinski herself once attacked Senator Marco Rubio for his appearance, claiming he looked like a little boy compared to Hillary Clinton.

And Scarborough often allows guests to attack people he doesn’t like. For instance he let Nicolle Wallace get away with slamming Senator Ted Cruz’s fatherhood saying, “I mean, we’ve heard him read a child’s fairy tale. I mean my god. I don't know how those kids sleep.”

Ironically, Scarborough had a warning for sites that allowed trolling to occur, “And I would suggest that sites that don't monitor that hatred better are going to start losing investment and get put out of business.” It appears that the pot is calling the kettle black.

JOE SCARBOROUGH: With us now the Editor of Time magazine Nancy Gibbs, This week’s cover story is “Why we are losing the internet to the culture of hate.” I think more importantly, the question you also ask is, What’s it doing to the rest of us?

NANCY GIBBS: I think we are all probably first amendment extremists about, yes, part of our life is that people will call us stupid and idiots and that's fine. And part of defending free speech is defending disgusting speech. But at what point do you not defend speech that suppresses speech?

GIBBS: If you’re a columnist and rather than your opponent saying that you’re an idiot they say, “we are going to rape your five-year-old child.

GIBBS: “We are going to post your home address and suggest ways for people to attack it.” And these are real examples. 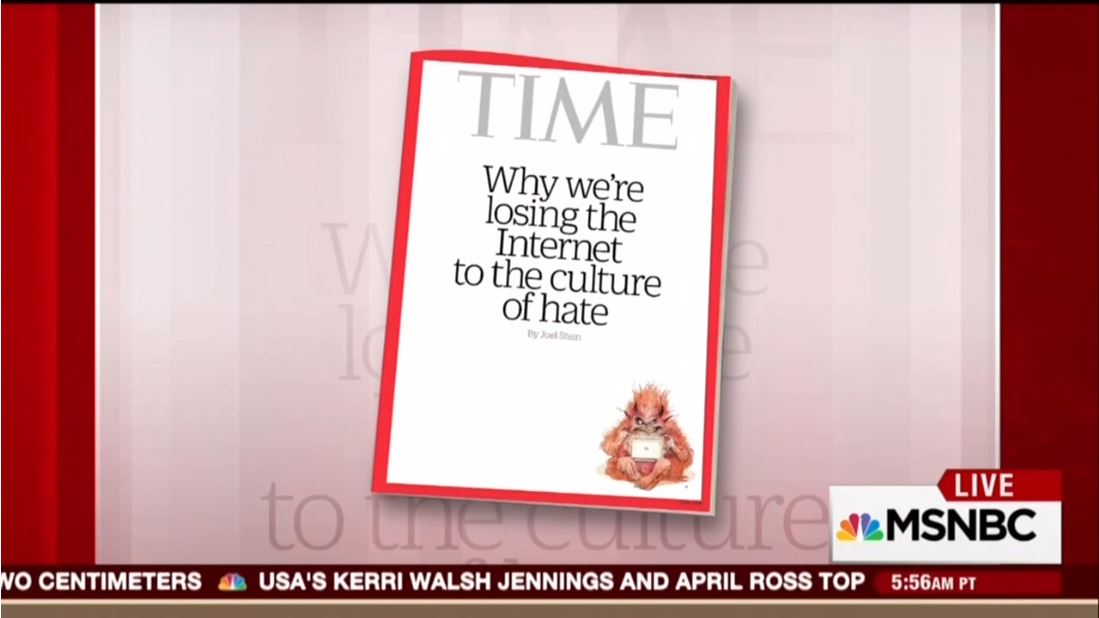 So we sent Joel Stein our columnist to explore this territory. Who are the people who are the most likely to be posting these kind of things? And in fact, the sobering thing is that they are very familiar. They are, you know, doctors and lawyers and kindergarten teachers. And it isn’t so much that they hate their target as they love the game of hating. And it’s a kind of game. And I think it has gotten to a point.

SCARBOROUGH: Yeah you know, the thing that surprises me is— again not take a lot of this stuff personally. Because, you’d have some of the most hateful vile remarks. And then I’d go, “who would write something like this?” And it would be like, you know, “Happy mom in Springfield, Illinois, I just loving Jesus and wanting to give a positive word out to the--.” That happened so many times, where you would look at the most hatful statement and you would go back, and you would go there is a disconnect here. This is not how this person behaves in their community.

SCARBOROUGH: No, there is nothing ironic—

HALPERIN: Nancy, I’m putting you on the spot with a question you may not know the answer to.

HALPERIN: In social media in other countries is there as much hate, or are we the world leader?

GIBBS: I don’t know the answer to that, but I don’t think we are. I think, as in many things, these are universal platforms that are used in a lot of different ways, but I would be surprised if we were worse.

HALPERIN: Can you commission that study? I would like to know if the Dutch as much on Twitter as we do.

GIBBS: We did an anonymous poll of our news room, and more than half he women have thought about leaving journalism because of just the level of hatred. And again, often threats and physical threats. This is not about being thin skinned or not wanting people to disagree with you. That comes with the territory. When it gets to a point of, “I am trying to shut you down and I’m going to say things to you that are genially frightening; going to target your children,” that's a different place. I do think women experience a lot of that.

SCARBOROUGH: I can tell you over eight or nine years of seeing what Mika gets online. I can tell you it is 100 times worse for women. And it has to do with appearance, violence, threats of rape, threats against children. What Mika gets and what other women get 100 times worse than what men get. 100 times worse. It is frightening, really is. Thank you so much. What an important, important piece, “Why we are losing the internet to culture of hate.” And I would suggest that sites that don't monitor that hatred better are going to start losing investment and get put out of business.