Donald Trump delivered a condemning speech against is opponent Hillary Clinton Wednesday, explaining why he calls her “Crooked Hillary.” The “big three” networks rushed to her defense, mostly picking on the easy targets among his allegations. But NBC’s Hallie Jackson went the farthest in bending the truth to counter Trump, and make Clinton look good. “Trump never one to mince words, though today not all of them were true,” Jackson reported during Nightly News.

First, Jackson bent the truth regarding Trump’s claim that Clinton’s private E-Mail server was hacked by foreign governments. “But a State Department inspector general's report said it found no such evidence, only routine phishing,” she stated, “No government official has said her e-mails were hacked.”

But that’s not entirely accurate.

According to a recent report by the State Department’s Inspector General, there were two known attempts to hack into the server. That’s a huge step up from Jackson’s claim of “routine phishing.” But then again this fact has been omitted from NBC’s reporting in the past, most notably by reporter Andrea Mitchell when the report was first released.

Jackson also noted the source material for some of Trump’s accusations, “Trump leaning heavily on the book Clinton Cash.” She once again mislead viewers claiming, “But that book's author admits there's no evidence to prove those allegations.” Although author Peter Schweizer did admit that he didn’t have the hard evidence that he would like, he has stated that a goal of his book was to get officials involved since that have the legal authority to investigate farther than he can.

LESTER HOLT: Today Donald Trump is trying to jump-start his campaign after a very rough few weeks. Trump went on offense, unleashing a wide ranging takedown of Hillary Clinton's record. But tonight NBC news has found many of the claims he made were misleading, or outright false. NBC's Hallie Jackson is separating fact from fiction. 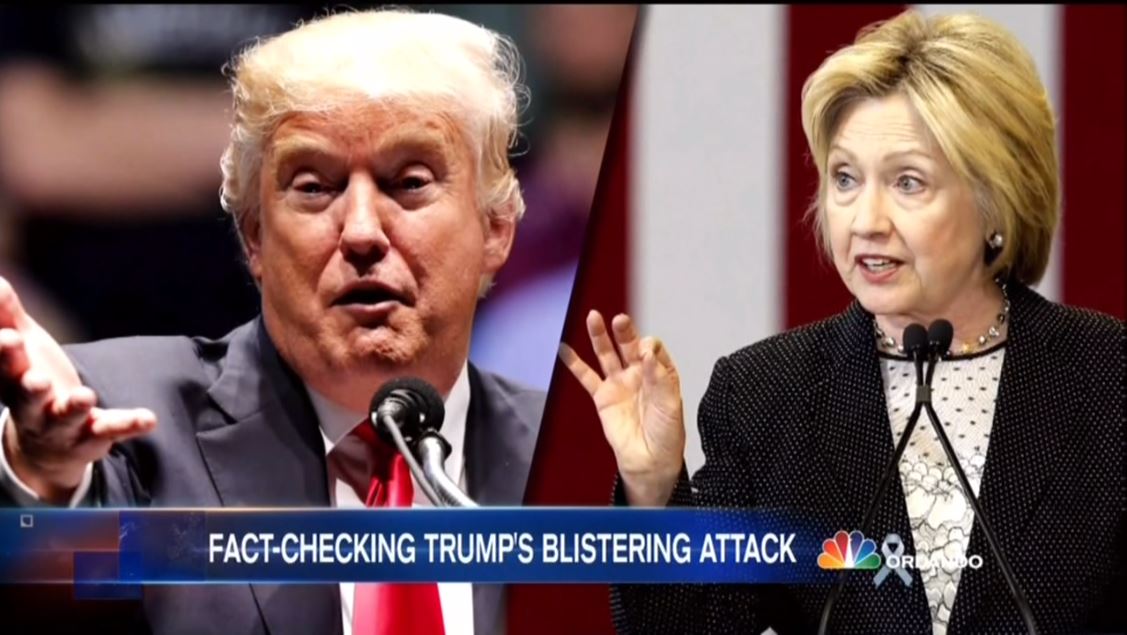 DONALD TRUMP: Hillary Clinton may be the most corrupt person ever to seek the presidency of the United States.

JACKSON: He's working to define Hillary Clinton as a creature of Wall Street, and Washington.

TRUMP: Her campaign slogan is, I'm with her. You know what my response is to that? I'm with you, the American people.

JACKSON: Trump never one to mince words, though today not all of them were true.

TRUMP: Her server was easily hacked by foreign governments.

JACKSON: But a State Department inspector general's report said it found no such evidence, only routine phishing. No government official has said her e-mails were hacked. And on Benghazi?

TRUMP: The late ambassador, Chris Stevens, I mean she— what she did with him was absolutely horrible. He was left helpless to die as Hillary Clinton soundly slept in her bed.

JACKSON: That's not what Clinton told the Select Committee this fall, under oath.

HILLARY CLINTON: I did not sleep all night. I was very much focused on what we were doing.

TRUMP: Hillary Clinton has perfected the politics of personal profit, and even theft.

JACKSON: Trump leaning heavily on the book Clinton Cash. But that book's author admits there's no evidence to prove those allegations.

CLINTON: I guess my speech yesterday must have gotten under his skin.

JACKSON: One day after attacking her rival on his business record, Clinton again targeting Trump.

CLINTON: He's going after me personally because he has no answers on the substance.