What About Obama? O'Donnell: Trump Must Learn Congress Has the Power 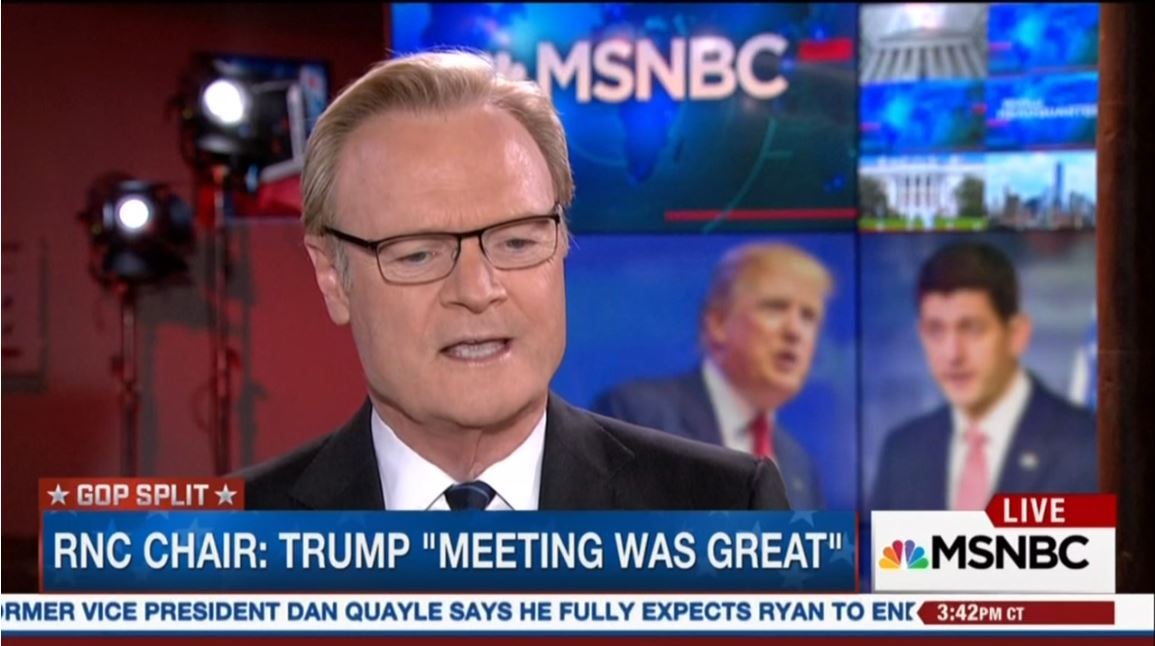 MSNBC’s always tolerant Lawrence O’Donnell trotted out the tired liberal narrative that all Republicans are idiots on the issues and governance on Thursday afternoon. Donald Trump and House Speaker Paul Ryan met Thursday to discuss how the Republican Party can unify and move forward following a contentious primary.  O’Donnell claimed to know exactly what happened during the meeting. “That's what the meeting was about, Paul Ryan taking the imbecile candidate to school, the school of governing,” he proclaimed.

O’Donnell felt the need to give Trump a civics lesson:

Treating Republicans like children in suits is nothing new for the liberal media. Their favorite target for this kind of ridicule was President George W. Bush. In 2001 Newsweek ran a headline that mocked his intelligence on foreign policy. “See George, See George Learn Foreign Policy,” the headline read. The article also claimed school wasn’t his thing and “he needs all the teachers he can get." A ridiculous attacks because Bush had graduated from Yale University in 1968.

On the other hand the liberal media are often in awe of President Barack Obama’s supposed genius. "We have not seen this kind of combination of star power and brain power and political muscle this early in a cabinet in our lifetimes," George Stephanopoulos once opined on ABC’s Good Morning America.

The comments made by O’Donnell are highly ironic seeing as President Obama himself may need to learn a thing or two about the power of Congress.

In a major ruling on Thursday, a federal judge found that the administration was in violation of the Constitution when they opted to continue funding insurance subsidies even though Congress had said no in 2014. Funds were supplied to the program to the tune of $175 billion. The ruling was a massive blow to the president’s landmark legislation and his legacy.

In her written opinion U.S. District Judge Rosemary Collyer stated, “Congress is the only source for such an appropriation.” Sound familiar?

CHRIS HAYES: What I hear when I hear that, Lawrence, is every huckster with a policy to sell is going to be setting up a meeting with Paul Manafort because if you have no-

HAYES: - if you've got nothing and you're committed to nothing, then, man alive, are there people in Washington, D.C. who’ve got a really good policy that you should get behind.

O’DONNELL: And Paul Manafort is going to instruct the candidate, as he has already, that the only salesman you're going to listen to is Paul Ryan, the most powerful person in the Congress. Paul Ryan is dictating starting today what the Trump policies are. That's what the meeting was about-

O’DONNELL:  -Paul Ryan taking the imbecile candidate to school, the school of governing. What did he say after the meeting? He said, “we talked about the constitution, talked about the separation of powers.”

What that means is staff people from Ryan's world are going to talk to whatever they call them in the Trump campaign. The two or three people who sit there and pretend they are thinking about policy and say, “hey, here's how we do it, and we're going to send you two charts. Show you the one where social security goes bankrupt and we’re going to show you the one where Medicare goes bankrupt, where the trust funds cannot meet the obligations.” And that's why we talk about it the way we talk about it. Trump’s going to look at the charts and go, “oh, oh okay.” And that's it. There's no Trump policies, they’re all Paul Ryan policies from now on.