Morning Jo(k)e Begs for 'Straight Reporting' with no 'Hatred' 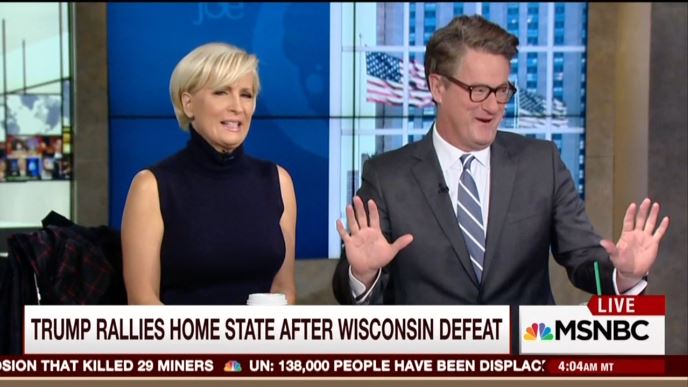 That’s it! Joe Scarborough has had it with the reporting coming from the media this election cycle. “All I’m asking for, and all I’ve been asking for, is just some straight reporting,” Scarborough pleaded with reporters across the country Thursday. “Don't let your hatred get in the way.” Say what?

“We've been talking about it for some time, you can't even speak of political reality these days without people saying "Oh, you're on the Trump train." No, actually everybody else is on the derangement train,” Scarborough said of people who don’t think his guy will get the nomination. A pretty hateful comment from someone who wants to stop the hate. The morning show co-host went on to say that if you think that Wisconsin was a sign for what is in stored for Trump then you are “extraordinarily stupid.”

Scarborough is not serious about wanting bias and hate out of reporting. Just before he made his complaint about the media he praised Thursday’s New York Daily News cover, which told Cruz to take the “F” and “U” trains out of New York City. And earlier in the week on April 5 they spent the very start of the show bashing Ted Cruz for how he speaks and insinuated it’s scaring his daughters. During the same show on Thursday Scarborough had some fun with a rhyme, his buddy, Trump made up about his rival. “I think he said it's l-y-i-n with an apostrophe. Hold the Bible high then you bring it down and start to lie. He's even got a rhyme going here.”

He also had some other suggestions about how reporters should do their job. “But our job is to report what is happening and not what we're begging and pleading and praying and hoping will happen.” Again Scarborough’s everyone but me attitude towards reporting shines through. In the middle of March he declared Trump was the GOP presidential nominee, while ignoring the fact that it would be very difficult for him to get the 1237 delegates needed to get the nomination. A fact that was recently backed up by Trump's terrible showing in Wisconsin. And during one of his crusades, Scarborough became obsessed with the notion of Rubio dropping out and begging Trump to be his VP. He became so obsessed that he badgered Trump with six different questions about it in an interview.

Scarborough’s call for “straight reporting” with no “hatred” is just a way for him to seem above it all. Scarborough’s own actions show that he prefers bias for me but not for thee, especially when it’s against his guy.

JOE SCARBOROUGH: Michael Steele, and we've been talking about it for some time, you can't even speak of political reality these days without people saying "Oh, you're on the Trump train." No, actually everybody else is on the derangement train.

To suggest that Wisconsin is dispositive of what happens from here to the convention is extraordinarily stupid. I can't believe the stupid comments I heard last night on every network and—You know I don't usually say the words, but just stupid. And define stupid as somebody saying the same thing nine months in a row and thinking that if they just –

BRZEZINSKI: “I lived in Argentina.”

SCARBOROUGH: --I lived in Argentina. We're not there. Just take a deep breath.”

KATTY KAY: And no Germany, either. Despite the very good accent, Joe.

BRZEZINSKI: I can do Ted Cruz.

SCARBOROUGH: I can't do Ted Cruz, thank god. I'm saying, all I’m asking for, and all I’ve been asking for, is just some straight reporting.

BRZEZINSKI: It can’t be done.

SCARBOROUGH: Don't let your hatred get in the way.

BRZEZINSKI: It can’t be done.

SCARBOROUGH: That doesn't mean he doesn't say offensive things. He says offensive things and I’m not dismissing any of that. I've written tough columns, as tough as anybody else. But our job is to report what is happening and not what we're begging and pleading and praying and hoping will happen.

[Video of Cruz talking about the NYPD turning their backs on New York City Mayor Bill de Blasio, and saying he stand with first responders.] 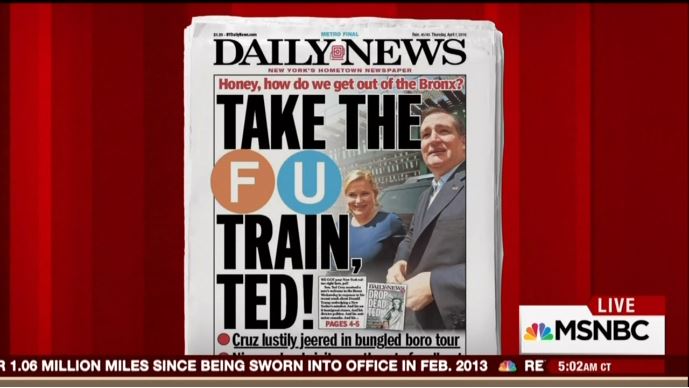 BRZEZINSKI: Is it Lyin’ Ted or Pandering Ted? [ Laughter ] Pandering Ted, but you have to say it in Shakespearian. Panderin’ [With accent]

SCARBOROUGH: I think—I think he said it's l-y-i-n with an apostrophe. Hold the Bible high then you bring it down and start to lie. He's even got a rhyme going here.

Willie Geist, a couple things. First of all we’re going to expect a Bill de Blasio press conference or at least Commissioner Bratton? Another thing, too, a bit inconvenient to Bill de Blasio and Commissioner Bratton and the rest of the NYPD leadership always siding with the criminals. I think I saw something a couple days ago showing New York City's murder rate at record lows.

BRZEZINSKI: Boy, that Mayor is really doing a terrible job.

SCARBOROUGH: So I don't know if you heard Donald’s speech last night, but his line when he started talking about New York values blew the roof off of that convention center at Bethpage.