After helping drive the Donald Trump clown car for nine months, Joe Scarborough was furious that the GOP primary ended up in the ditch Thursday morning. “They perform so poorly on-- This year on a fifth-grade level and constantly send one clown after another clown after another clown up on the national stage and tarnishes the Republican brand in the way that they have for years now.”  Meanwhile, Scarborough has had Trump on his show more than any other candidate by far, and has even praised Trump for his availability. 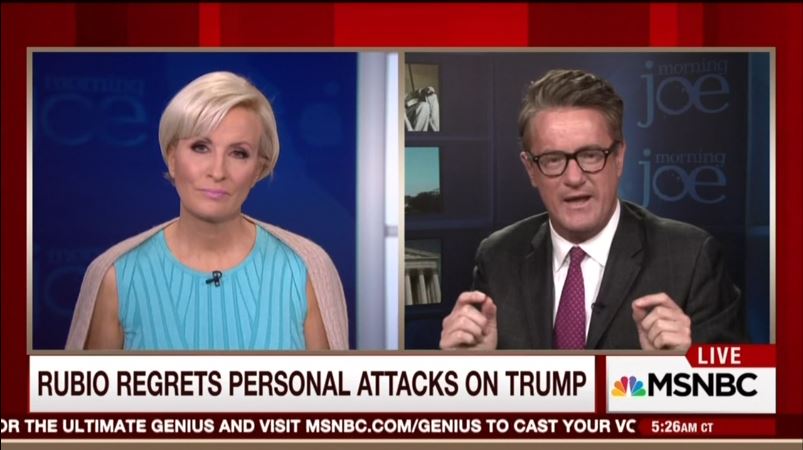 “For some reason those extraordinarily talented governors and legislators do not rise to the level in the Republican primary process and we as a party -- I'm talking about my party -- needs to figure out why the party that dominates the nation from coast to coast puts up clowns, reality show stars.” Scarborough exclaimed, acting like the ridiculous and obscene spectacle of this year’s election is a reoccurring theme. “And I'm not talking just about Donald Trump, I'm talking about Sarah Palin types, Michele Bachmann types, Herman Cain types that run around yelling 9-9-9 every four years.”

Herman Cain’s 9-9-9 plan was humorous and a bit gimmicky, but at least it was a policy position and not a vague declaration about how America is going to be “winning.” And to be fair, Palin didn’t become a “reality show star” until well after John McCain lost in 2008 and she did do a lot to help Alaska. All three of Scarborough’s examples of GOP “clown” candidates are largely absent from public life now and one has endorsed his good friend Trump.

Panelist Mike Barnicle tried to argue that GOP is just not running governors like they used too and it left room for the clowns to come in. Barnicle seems to have for gotten the numerous capable Republican governors that ran this election cycle: Scott Walker, Rick Perry, Jeb Bush, John Kasich, Jim Gilmore, Chris Christie, Bobby Jindal, Mike Huckabee, and George Pataki. Along with them there were a whole host of additional serious candidates with strong policy proposals.

The liberal media, including Scarborough, can’t act surprised by the state of the GOP, because they helped make into what is has become. The MRC has done numerous studies into how the media covers Trump and it has mostly been in his favor.

In fact, Scarborough himself hailed how Trump was able to get the media to bend to his will. But, when criticism of Trump was ratcheted up and the Republican Party started pushing back Morning Joe stood in defense of their longtime friend.  Co-host Mika Brzezinski argued it was too late to push back and said “You can’t start telling the truth now” about Trump. Scarborough also came to Trump’s defense when Romney came out against him saying he should ‘Jump in’ or shut up. Panelist Nicolle Wallace even slammed, what she called, “illegitimate anti-Trump movements” growing in the party, on March 7.  And Scarborough backed Trump’s decision to not attend a Fox News Debate saying: “I would rather set myself on fire” than be subjected to tough questioning from Megyn Kelly.

It’s quite hypocritical for the liberal media, and Joe Scarborough, to decry how far down the toilet the GOP nomination process has come when they helped it get there. My colleague Kyle Drennen wrote on March 4 that the networks are slamming the GOP for being “vulgar,””childish,” and for reaching “new lows,” but only showed clips of Donald Trump doing those things. Not only did the liberal media help lower the GOP discourse by promoting Trump, they did it by trying to discredit his detractors who were trying to prevent it from happening.

NewsBusters is not the only outlet to take note of Morning Joe’s more than friendly relationship with Donald Trump, as this montage, put together by The Washington Free Beacon, shows.

JOE SCARBOROUGH: But gain, though, Mika, it is a centrist country, Mika, in so many ways but for me the puzzle of this election cycle for Republicans was the same thing in 2012. How can you have a political party that is so dominant on the local level and on the state level, that controls 60 percent of the governorships, 60 percent of the state legislatures, has the most members in the House of Representatives since 1928, dominates the United States Senate, controls all levers of government except the White House and yet they perform so poorly on-- this year on a fifth-grade level and constantly send one clown after another clown after another clown up on the national stage and tarnishes the Republican brand in the way that they have for years now? It is -- it remains one of the great mysteries of this Republican Party that is, again, dominant on every level and yet humiliates themselves every four years in debates on the national stage.

MIKA BRZEZINSKI: I think the problems with the party that you've been talking about for nine years, the nine years that you've been doing this show, and probably many years before that, are finally, are finally -- it's judgment day. I mean, the party is going to have to explode and start all over again or figure itself out. If you look at where we are now, it's not the Republican Party. There's a Democrat there's as the front-runner. I mean, come on.

SCARBOROUGH: You know we, we—I’ve got, I, I, I ,I’ve got to say, the insults have been flying all 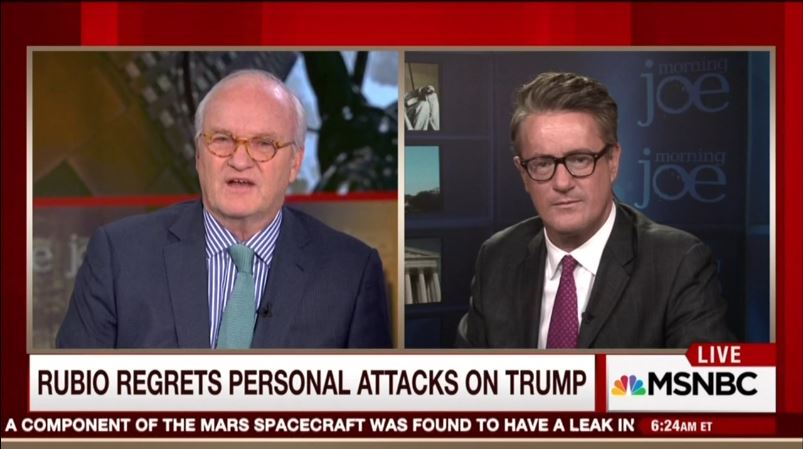 over the place but that you actually had somebody talking about the collapse of Marco Rubio's campaign and saying, “you know, he was really running a perfect campaign until he talked about Donald Trump's sexual organ.” The "Washington post" actually said it, I not going to say it this morning, on TV. And you're sitting there going “this is a major party? This is what the debates have devolved to?” And I'm sorry, 9-9-9 wasn't that much higher rhetoric four years ago. It's been a clown show for years.

MIKE BARNICLE: Part of it, Joe, may be rooted in the fact that, as you indicated, 60 percent of the governors in this country are Republican. We don't have governors running for president as much on the Republican side as we have in the past, we've got one, John Kasich this year.

BRZEZINSKI: Used to have Christie.

BARNICLE: But I mean governors talk in reality. Senators—I mean, Steve’s explanation of Bernie Sanders on the auto bailout is so complicated.

BRZEZINSKI: We had governors. They didn’t make it. 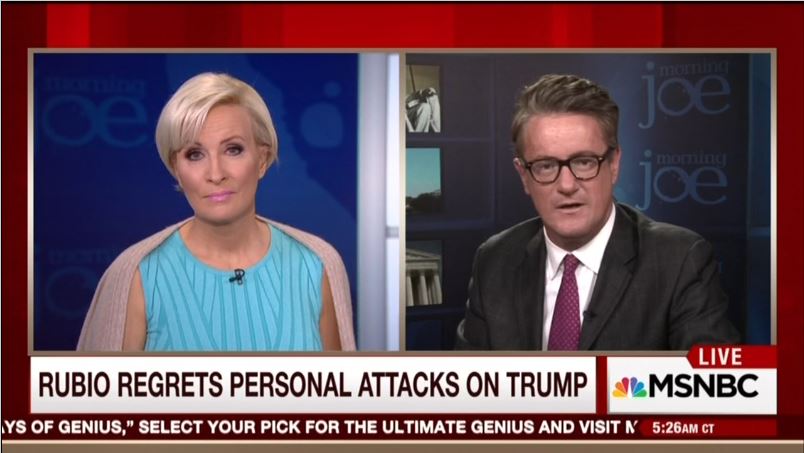 the Republican primary process and we as a party -- I'm talking about my party -- needs to figure out why the party that dominates the nation from coast to coast puts up clowns, reality show stars. And I'm not talking just about Donald Trump, I'm talking about Sarah Palin types, Michele Bachmann types, Herman Cain types that run around yelling 9-9-9 every four years. It's been years. And people legitimately have gotten angry at me every four years for criticizing the clowns that go on the debate stages.

BARNICLE: And it’s been decades in the making.