Hillary: I'm 'the Most Transparent Public Official in Modern Times'

During a Friday afternoon interview with Hillary Clinton, CNBC’s John Harwood asked the presidential candidate about the current FBI investigation into her e-mail practices.  Clinton defended herself from allegations of misconduct stating “I've been the most transparent public official in modern times, as far as I know.”

Harwood’s interview was conducted at a factory in Detroit, Michigan where Clinton held a rally and gave a speech. Clinton praised the factory for being owned by a woman and for employing union labor.

“Would you concede that you and the people who work for you at the State Department were sloppy in the way you handled top secret information?” Harwood asked towards the end of the interview. “No. No, because let's be clear about this. There wasn't a single one of those that was marked classified either sent or received. That hasn't changed.” Clinton shot back.

The interview ended soon after with no follow up questions from Harwood. There were no questions about the Secretary directing aides to strip items of their classification markings; no questions about how, in all the years Clinton was the head of the State Department, she did not receive one classified email.

John Harwood was one of the moderators from the disastrous CNBC GOP Debate, which resulted in NBC getting its debate stripped by the RNC and given to CNN.

JOHN HARWOOD: Well in terms of your own reflection on this though. Let's say you're right and there is no legal case. Given the fact that more than 1,000 e-mails, and I recognize there is a dispute, have been described as classified some even top secret. Would you concede that you and the people who work for you at the State Department were sloppy in the way you handled top secret information?

HILLARY CLINTON: No. No, because let's be clear about this. There wasn't a single one of those that 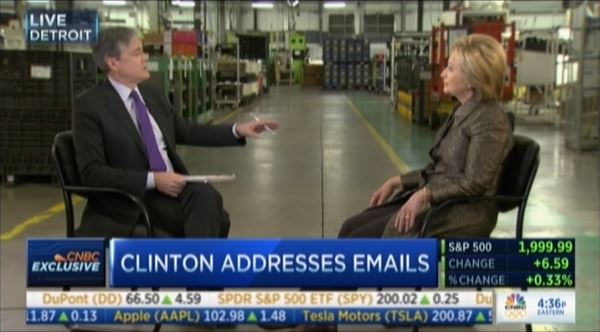 was marked classified either sent or received. That hasn't changed. Now, what I think the public may not understand is that when a process is undertaken to determine whether e-mails should be made public—Remember, I asked, nobody told me to. I said “make them all public.”

I've been the most transparent public official in modern times, as far as I know. When that process is undertaken, then other agencies gets to weigh in and get to say: “Hey, wait a minute, you know, I don't think that should come out now.”

Whether or not the state department or if I was in some other agency agrees, that is par for the course. Now whether it should be or not is a whole separate issue but it doesn't change in any way, nothing was marked classified and you know, that is just a fact. It's I think one that bears repeating.

HARWOOD: Secretary Clinton, thanks very much.

CLINTON: Good to talk to you.