[Editor's note: The original headline here characterized Chuck Todd as saying "It's not the media's job to vet Trump's past." Todd complained to us that it wasn't an accurate sense of his statements. It was not. He was suggesting Trump's rise was not the media's fault. The headline was changed.]

In the wake of Donald Trump’s victory in the Nevada Caucuses, many on the right are scrambling to point fingers at who is to blame for his dominance. A common place for blame to fall is the liberal mainstream media for not aggressively looking into his past, something they do as a matter of course for virtually every other Republican.

MSNBC’s Chuck Todd washed the media's collective hands on Wednesday evening by claiming the other campaigns could use all the previous media coverage to cobble together into attack ads:

“A common criticism you’ve heard is that Trump's rise is the media's fault, because we have enabled his rise. But, folks, you could argue that the media has also provided all the material that normally a campaign would want to put together an attack against Trump.”

Todd went on to point out inconsistencies in Trump’s statements dating back to 2002, showing the transcript of an episode the Howard Stern Show where Trump was asked if he was for the Iraq War. Trump’s response to Stern was “Yeah I guess so.” A position he claims to have never held.  Todd also showed a statement from Trump where he criticized Obamacare as a “lie,” but he once held the position that single-payer health care “works in Canada.”

Todd’s analysis feigned objectivity while barely scratching the surface. This kind of coverage of Trump is nothing new. A recent MRC study found that most coverage of Trump has little to do with his old, self-admitted, liberal positions or any vetting of his past of any kind.

A proper vetting is probably something they are waiting to do until after Trump is the GOP presidential nominee – all the better to assist the Democratic nominee – a technique that was unitized against past GOP nominees John McCain and Mitt Romney. During the 2012 presidential campaign the media dug into every corner of Romney’s past. They ran story after story about the Romney family dog being caged on the roof of their car during a road trip. The media even dug up a story about a bullying incident from when Romney was in high school.

For Chuck Todd to insinuate that it’s not the media’s job to dig into a candidate’s past or fully vet a candidate for the public is just plain ridiculous. Todd laid the this duty at the feet of the other candidates stating “Folks, those are all inconsistencies that a normal campaign that was running against Donald Trump would probably put together, into TV ads and try to see if it would leave a mark with voters.”

For a member of the media to advocate for campaigns alone to do the vetting is an abdication of journalistic duty.

CHUCK TODD: A common criticism you’ve heard is that Trump's rise is the media's fault, because we have enabled his rise. But, folks, you could argue that the media has also provided all the material that normally a campaign would want to put together an attack against Trump. You don’t have to look far for this stuff folks.

Politifact's 2015 lie of the year was a litany of Trump’s statements on the campaign trail. Pick an issue and there are other stories, all over the place, about Trump's inconsistencies.

Here’s what I mean. On Iraq, Trump said during a debate last fall that “I'm the only person on this dais that fought very, very hard against going into Iraq.” Obviously in 2002 when Howard Stern asked him “Are you for invading Iraq?” Trump responded. “Yeah I guess so.”

Before the U.S. Invaded in Iraq in March of 2003, Trump went on Fox News and said, “either you attack or don't attack.” And after the attack began, he told Fox Business that quote “Wall Street is going to go up like a rocket” because of it. And to cap it all off, here's what he told me on Sunday when I asked him about those original Howard Stern 2002 comments. 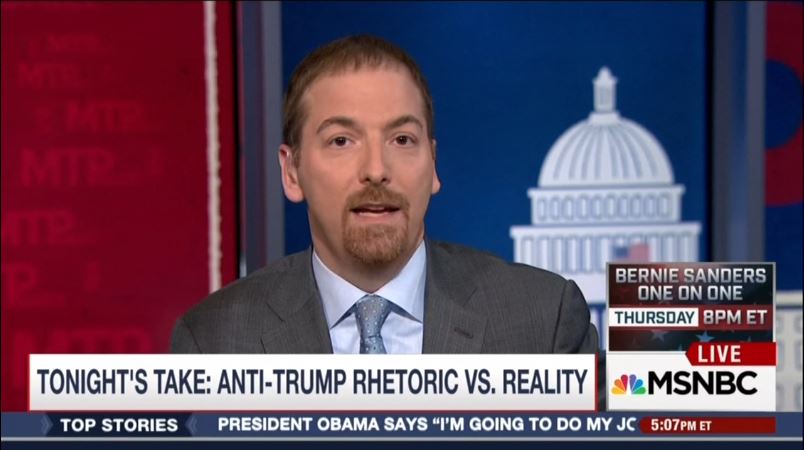 DONALD TRUMP: I really don't even know what I mean. Cause that was a long time and who knows what was in my head?

[Cuts back to Chuck Todd live]

TODD: Folks, those are all inconsistencies that a normal campaign that was running against Donald Trump would probably put together, into TV ads and try to see if it would leave a mark with voters.

Here's another example. Health care. Trump has said time and again that “Obamacare is a total lie.” But he's on the record years ago saying he's “liberal on health care.” And during a debate last summer, he praised single-payer health care saying, quote, “it works in Canada.”