Media Research Center President Brent Bozell appeared on Fox Business, Wednesday, to hammer the networks for hiding the truth about state election laws and, at the same time, ignoring the radical attempted takeover by the Democrats of elections.

Citing a new study by the MRC, Bozell noted the overwhelming support by Americans for voter ID: “That is the key issue. You are not hearing anyone in the media talk about the fact that the election laws in the United States will be turned upside down if what the Democrats want goes through.”

Regarding Joe Biden’s summit in Geneva with Vladimir Putin, Bozell contrasted it with Donald Trump and reminded how obsessed our press is with the former President: 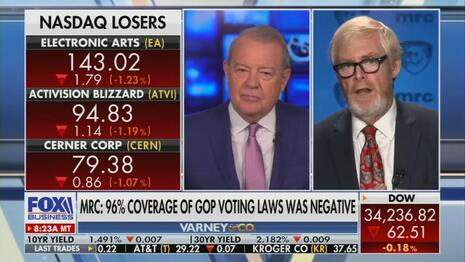 STUART VARNEY: I don't know whether to laugh or cry. Because it really is funny. It is tragic too. That is the media all over Trump after the Helsinki meeting but praising Biden for the Geneva meeting. Pathetic, isn't it? Brent Bozell joins me. All right, Brent. This coverage is vastly different. It couldn't be more different, could it?

VARNEY: It is fantastic, isn't it. It is laughable. You're laughing too. I don't blame you, Brent. Now, listen to this, Hillary Clinton was on the air this morning, not on our air, but she on TV talking about Biden's meeting with Putin. You have got to watch this. Roll tape, please.

HILLARY CLINTON: We've lost four years and the fact that President Biden will come very well-prepared. He has a very strong team. We expect an open, you know, straightforward conversation. That is Joe Biden writ large. Let's talk about what we're going to do going forward,

VARNEY: Oh, he is going to come well-prepared.

BOZELL: Two points, two points. Come on. Who do you think Putin respects and fears more? Donald Trump or this president that we have? He is going there to chitchat. They're doing cyberattacks on us. There is all sorts of bad stuff going on. This is Jimmy Carter 2.0. And the media are loving the fact that he is going to chitchat.

VARNEY: Yeah. Okay. I think we've done this enough. I'm going to move on to a different subject. I want you to take a look, I know you have seen this, Brent, this is worth seeing this again. Jon Stewart pushing the Wuhan lab leak theory. You got to watch this again. Roll it.

[Clip of Jon Stewart on Colbert.]

VARNEY: Brent, take that one on too.

BOZELL: Pure dishonesty. Donald Trump and conservatives spent a year saying that this probably came from a lab and we were all attacked as racists for doing that, as being anti-Chinese, racist for doing that. Guess what? The evidence is now coming out that we were right. Here comes Jon Stuart, everybody news this, you're an idiot if you didn't know this like the enlightened people, like we knew this. It sounds very funny but also very dishonest.

VARNEY: Another subject, you're covering a lot of ground this morning, Brent. We thank you for that, but here is another one. We have a study that says 96 percent of mainstream media coverage on Republican backed election laws was negative. This is just in the past three months.

VARNEY: Break this down for us, Brent.

One is that state laws in 36 states are being overridden by the federal government if the Democrat's law comes through. But much more importantly the key element of this voting rights law is voter ID where the Democrats say there will not be voter I.D. 85 percent  of Americans are furious when they're going to learn about this. Because 85 percent of Americans want voter I.D. That is the key issue. You are not hearing anyone in the media talk about the fact that the election laws in the United States will be turned upside down if what the Democrats want goes through.

VARNEY: Totally deliberate. There’s no question about it. Brent, thank you very much indeed.