MRC's Brent Bozell to Joy Behar: 'The Apology Should Be as Public as the Insult’

Media Research Center President Brent Bozell on Friday called out Joy Behar in the wake of her private apology to Vice President Mike Pence. Appearing on Varney and Co., Bozell said of the regret for smearing Christians: “The apology should be as public as the insult.” On the February 13 The View, Behar trashed Pence and millions of Christians as having a “mental illness.”

Bozell on Friday called the private apology a “good start.” But he added: “She has to do it. There has to be an apology from ABC and there has got to be a statement made that this kind of anti-Christian bigotry is going to stop.”

The private apology came about after the National Center’s Justin Danhof showed up at a Disney shareholder meeting on Thursday and pressed Disney CEO Bob Iger on Behar’s bigotry: “Specifically, do you think, like Ms. Hostin and Ms. Behar, that having a Christian faith is akin to a dangerous mental illness?”

This prompted Iger’s response: “Joy Behar apologized to Vice President Pence directly. She made a call to him and apologized, which I thought was absolutely appropriate.”

For more on the National Center’s efforts, go here. To see video of the question, go here.

For more on how you can be part of our grassroots army and let ABC’s sponsors know how upset you are about the bigotry on The View, go to http://stopattackingchristians.com. 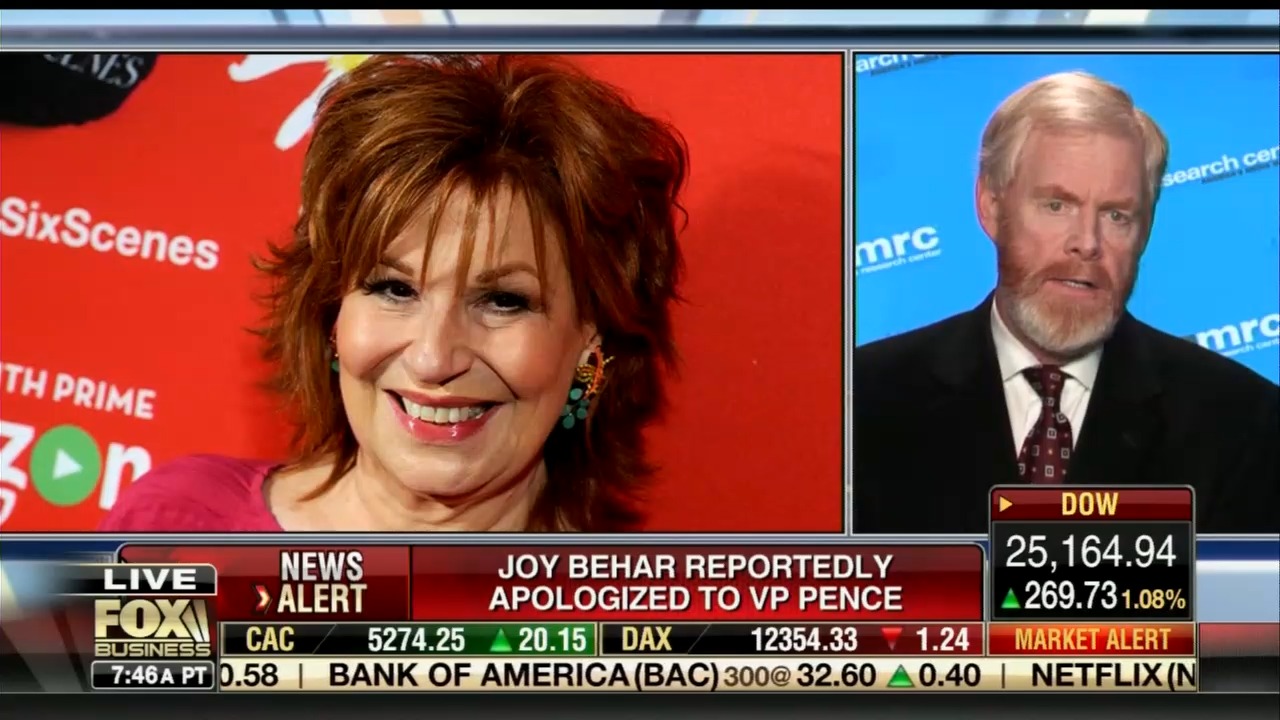 STUART VARNEY: Disney’s chief,  Bob Iger, he told shareholders that The View host Joy Behar, had apologized to Vice President Mike Pence on the phone for insulting Christians. Brent Bozell, Media Research Center President joins us mow. You say this is an apology, but it’s not enough. Right?

BRENT BOZELL: It’s a good start. But you know, is this rather —  I don't know, strange —  that we would hear about this from Bob Iger talking at a shareholders meeting responding to a question. Look, when Joy Behar insulted the Vice President she was insulting all Christians because she insulting Christianity. There are 280 million Americans who is identify themselves as Christians. The apology should be as public as the insult. So, she should apologize publicly. I think the matter would end at that very moment, but she has to do it.

There has to be an apology from ABC and there has got to be a statement made that this kind of anti-Christian bigotry is going to stop. I'll remind you, Stuart, that had she called Islam a mental illness, can we only imagine what would have been the response? And never in a million years — Or what about Judaism? Why not call Judaism a mental illness? You don’t do it because that’s anti-religious bigotry. Well, Christians demand to be treated likewise, especially when the vast majority of Americans are Christians.

VARNEY: Should The View still be run by ABC News? I don't think it is a news program. It's a point of view. It's an opinion.

BOZELL: Never has been. No, no. It is a talk show. It's a morning talk show. And which is, you know, perfectly fine. But if ABC considers that to be news, I think it tells you more about ABC than it does The View. If that’s news, we’re all in trouble.