Brent Bozell on Thursday denounced the “willing participants” in the “far-left” media who are plotting to completely destroy Donald Trump’s administration. Appearing on Varney and Co., the Media Research Center President underlined just how unhinged journalists have become: “They are willing participants in a far-left that I believe that Joe Lieberman doesn't recognize, that I believe George McGovern wouldn't recognize and I believe Ted Kennedy wouldn't recognize.”

Bozell described journalists as “committed” to removing Trump from office and predicted, “They believe he should never have been elected. They were shell shocked that they let him get elected over Hillary Clinton. They believe he's not fit to be in office and they're going to hound him until they can remove him.”

Regarding Susan Rice “unmasking” Trump officials in confidential documents, the MRC President reminded everyone of the Obama official’s history:

Susan Rice, we know the Benghazi video was a flat-out lie. We know that Susan Rice went on five different Sunday morning talk shows and promoted the lie. We know that none of them, except for Fox News, has ever held her to account for lying on their own shows. 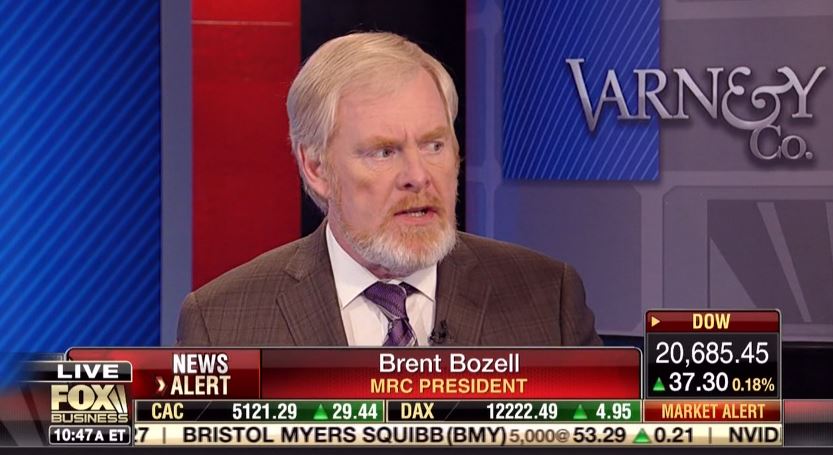 STUART VARNEY: On a news-filled day, we bring you the next story: Susan Rice and unmasking, as in revealing, President Trump's transition team, the names thereof. This was buried largely by the mainstream media. But look who's here to un-bury it. Brent Bozell, Media Research Center president. Look, I'm making that comment. You've got the numbers. Spell it out. They buried it? 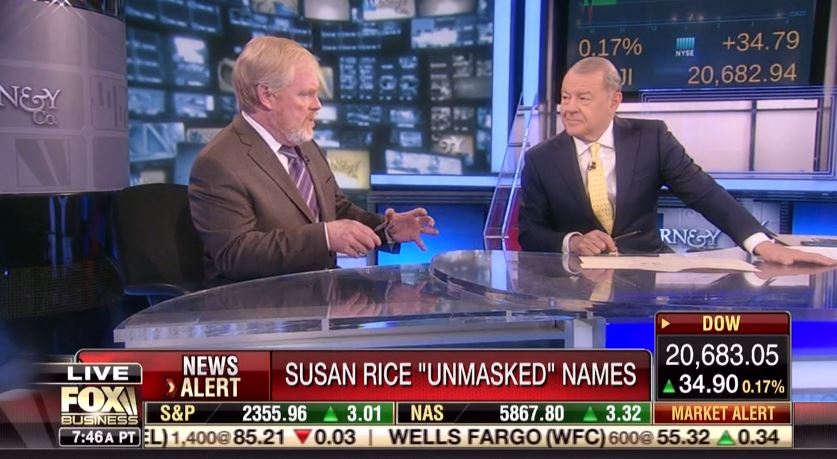 BRENT BOZELL: They're burying the real story. Their coming up with a different story. Look, let's put this into context: Susan Rice, we know the Benghazi video was a flat out lie. We know that Susan Rice went on five different Sunday morning talk shows and promoted the lie. We know that none of them, except for Fox News, has ever held her to account for lying on their own shows. And now she has been caught in another lie. Now she goes on PBS [sic] and says she knows nothing about this unmasking thing. Two weeks later, she's caught where she admits that, yes, she was responsible for that. Now, you should think that the media would be all over this saying, “Wait a minute, do we have a Gestapo state where the government ally nilly goes after people and unmasks them and destroys their reputations?” And who leaked it to the press which, by the way, a felony.

You'd think they'd be interested about this. It's not only been silenced, but when they finally came out with it and started talking about it, on MSNBC Chris Matthews called it racist and he called it sexist, which is an insult to every black person in America and every woman in America to suggest that it's going to be racist and sexist. And last night, the networks in covering it all talked about how there was no “there” there and it wasn't a story. Now, if that's the truth, why have they been covering Trump and Russia?

VARNEY: Well, fair question. I mean, it's same old, same old, same old, isn't it? We've had this conversation before, Brent. I am astonished at the degree to which American journalism has totally caved to the Trump haters, the people with contempt for our President. And I want to go further, I think that's an acceptable word. When I see this coverage and I talk to these people privately, they hate him. They have contempt for him in the extreme.

BOZELL: I would just clarify one thing: I don’t think they caved. They're part of it. They are willing participants in a far-left that I believe that Joe Lieberman doesn't recognize, that I believe George McGovern wouldn't recognize, and I believe Ted Kennedy wouldn't recognize. This is how militant the left has become. And let me say this, and I have been saying this on programs, this is not in any way an exaggeration, it not hyperbole on my part. This is not a media that are out to hold Donald Trump responsible. This is a, this media as an institution is committed to his removal from office. And mark my words on that. They are committed to his removal. They believe he should never have been elected. They were shell shocked that they let him get elected over Hillary Clinton. They believe he’s not fit to be in office, and they're going to hound him until they can remove him. That's the goal. And, of course, they'll deny it. They'll call me crazy. I'll stand by what I just said.

VARNEY: All right. Following up on the Susan Rice non-coverage, the burial of the story there, what about Steve Bannon removed from the National Security Council. How did they treat that?

BOZELL: Any attempt the cause discord in this administration, they're going to do. The idea of citing critics —  I love that, critics— critics means the person next to you who's having water at the water cooler at NBC News.

BOZELL: Sources? Hell, I heard it from my friend down the hall having a cup of coffee. This is anything to as an excuse to sew discord especially with Steve Bannon or a Kellyanne Conway or anybody who is behind an effort to take on the left.

VARNEY: Why hasn't it rebounded in Trump's favor? Because I don't think that it has.

BOZELL: Well, I think that the President has to be more selective in who he's fighting with. You know, I think sometimes he just gets off message going after people like Arnold Schwarzenegger. You know, that served him no purpose whatsoever. I think he needs to keep his powder dry. And when there is a need to, then throw a hand grenade at the press. But not do it every single day. And I think maybe there's a little bit of fatigue going on. I would caution him to be more careful.

BOZELL: It will not stop for the next four to eight years. It won’t stop.

VARNEY: Well, keep coming back on the show then, Bozell.