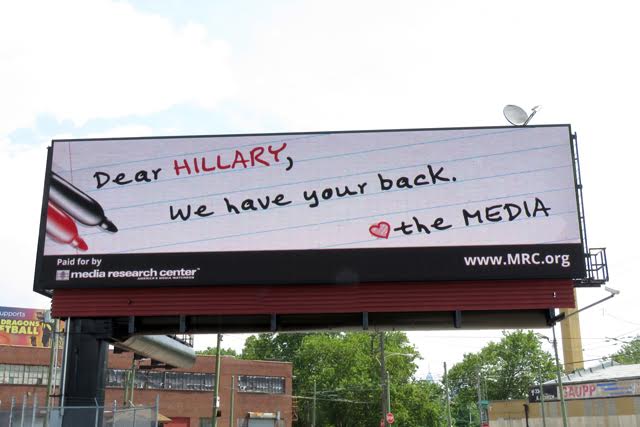 RESTON, Virginia -- Media Research Center (MRC) President Brent Bozell issued the following statement announcing the MRC’s plans to blanket Philadelphia with signs and ads exposing the leftist media’s love affair with Hillary. From billboards to mobile building projections to sidewalkgraphics to taxi TV ads to taxi tops, everywhere convention attendees in Philadelphia look, they will see the MRC. The on-site activities will be complimented by round-the-clock monitoring of the convention by a massive team of analysts in Virginia and around the country.

“The media’s love affair with Hillary will reach its apex this week in Philadelphia. They have been in the tank for her since the beginning. We can safely predict that at the Democratic National Convention they will need smelling salts to recover from their fainting spells.

“The Media Research Center is not going to allow the media to coronate Hillary without a fight. We intend to show all of America their role in propping up, promoting, and defending the most corrupt person to ever receive a major party’s nomination. From Benghazi to illegal Clinton Foundation donations to criminally-dangerous misuse of classified information, the media have held Hillary’s hand every step of the way and they ought to be ashamed. It's time they started to report the truth.

"It's very simple: Cover Clinton like you're covering Trump. Nothing more, nothing less.

“The fourth estate is failing in its responsibility to the America people. As most in the media transition to their role as Clinton’s communications arm, the Media Research Center is going to expose their agenda. If they thought their credibility was in the tank before this began, wait to see what it looks like when this one is over."

Newsbusters Special Reports on Hillary and the media