On Monday, Tim Graham reported that NPR was wrong to suggest gun activist Shannon Watts was one of those accidental activists who were “just regular people....folding the kids’ laundry...who had never done anything political before.” But in reality, Watts was a longtime PR specialist with a record of political contributions to Barack Obama and national Democrats.

On Tuesday, NPR ombudsman Elizabeth Jensen announced on Twitter that complaints to NPR had spurred the taxpayer-supported network to post a correction online. NPR and Jensen are to be commended for posting a correction and making it known, which is fairly rare in our national broadcast media. 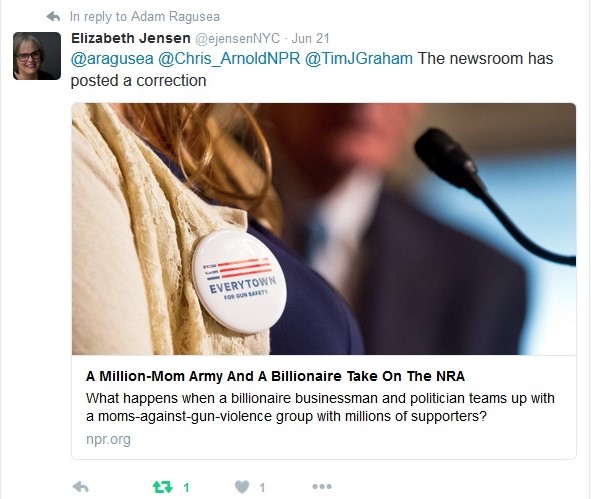 Here's the admission of error on the article page (but not on the transcript page):

This report refers to Shannon Watts as one in a group of "regular people" who began advocating for stricter gun control measures in recent years. After the December 2012 shootings at Sandy Hook Elementary School in Newtown, Conn., she created the "One Million Moms for Gun Control" Facebook page. It later became "Moms Demand Action for Gun Sense in America." We should have noted that Watts has a background in corporate communications. From 1998 to mid-2012, she was a corporate communications executive or consultant at such companies as Monsanto and FleishmanHillard. Before that, Watts had what she says was a nonpolitical job as a public affairs officer in the Missouri state government.

Our report also states that Watts had never "done anything political" before the shootings at Sandy Hook. We should have noted that Federal Election Commission records show she began contributing money to Democratic campaigns and political action committees earlier in 2012. According to those records, she has made about $10,000 in such contributions, and about one-third were made before the Sandy Hook shootings.