The media have always been liberal, but never have they shown such obvious bias as in the 2012 election. Today, the book “Collusion” by Brent Bozell and Tim Graham is available online and in book stores. The authors present detailed evidence of the liberal media’s unmistakable – and highly successful -- efforts to reelect Barack Obama and to demonize his rival.

In the 2012 election, decades of liberal bias came to fruition in a bald-faced attempt by the so-called mainstream media to protect Barack Obama from his failures, trumpet his accomplishments, and discredit his GOP rivals. 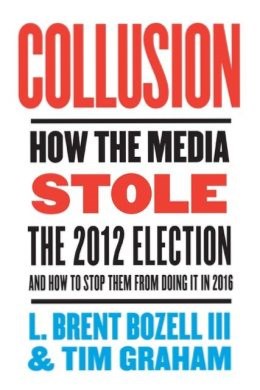 The process began in 2011, when the national press treated Republican primary candidates as a virtual field of nightmares unworthy of serious consideration. One by one, the media took them apart using the time-tested tools of hidden-camera exposes, innuendo from anonymous accusers, repetition of harmful sound bites, and biographical character assassination.

Once Mitt Romney emerged as the party’s nominee, the media went to work in earnest. Endless sport was made of his strapping a dog to the roof of his car, and the Washington Post published a 5,400-word "expose" on how he may have pinned a boy down and cut his hair in 1965.

This, from the same people who in 2008 thought it was “old news” that Obama was friends with former terrorist Bill Ayers or that he spent 20 years listening to the Rev. Jeremiah Wright’s radical sermons without apparently having heard a single word of his anti-American rants. Normally a sitting president can expect to have his record in office closely scrutinized. Instead, Washington Post readers were treated to 5,500 words on Barack Obama’s lifelong love of basketball.

How hard would the media work to ignore the incriminating details and lies about the terrorist attack on our consulate in Libya? How dumb would they be willing to play about the notorious Fast and Furious “gunwalker” scandal? Brent Bozell and Tim Graham of the Media Research center use the MRC’s deep database and detailed research to show that Barack Obama could never have been outspent by his challenger.

Not when PBS, ABC, The New York Times, the Washington Post, Time, Newsweek and the rest of the leftist media were actively colluding with the Obama campaign to push its themes about the Republicans caring only about the super-rich and a Republican war on women and minorities, while excusing the president’s failures, ignoring his numerous gaffes, and attacking Romney on his behalf.

Everything that’s emerged in the last few months about the IRS, the NSA, and Benghazi only underlines how aggressively the media tried to keep a lid on the Obama scandals – even denying that there were any Obama scandals.

Now is the time to put out the word that our national media cannot be trusted as any sort of referee of our election process. Their collusion with the Democrats and denial of their own role as journalists is costing the country a better, freer future. You can order and spread the word at mediacollusion.com. Thanks for supporting MRC and NewsBusters as we try to expose the "objective" press in all its shameless misbehavior.