It's really sad that at this point in the presidential campaign, when we're in a situation where they are saying now that the math is impossible for Hillary Clinton to get the Democratic nomination, that now suddenly the media is going to try to vet Barack Obama's record. And really, obviously, the media itself are saying, 'Well, obviously the Saturday Night Live skit had something to do with this.'

They're taking their cues on when to be a professional journalist based on comedy sketches?! 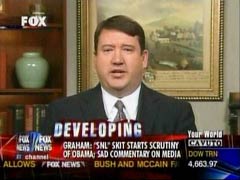 Buttner then asked Graham if he was "really surprised by this" given that both the mainstream media and Sen. Obama are "pretty liberal." Replied Graham:

No, but I think that a lot of people would expect, there's a lot of people who are not conservatives who really trust the media to give them the straight scoop. There's lots of moderate and independent voters that watch these newscasts, and they ought to try to do a better job of just telling people who this man is. And they've really failed to do that up to this point. And, you know, we ought to expect better of them than what we're actually getting.