Olbermann Denounces NewsBusters as 'Worst Persons in the World' 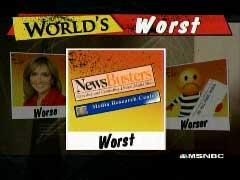 On Friday's "Countdown," MSNBC host Keith Olbermann named NewsBusters the "Worst Persons in the World." Olbermann took issue with a posting by NB contributor Al Brown, who mistakenly said Brian Williams instead of Brian Ross. Brown corrected the post after an NB commentor, SMGalbraith, noticed the error. But it was too late: Olbermann had seized the error and made it the centerpiece of his "Worst Person" segment.

A name error tops the list as the "worst"? The "paper of record," the New York Times, runs a daily corrections page and has an average of seven errors per day.

"But tonight's winners: NewsBusters. Rabid right-winger Brent Bozell's self-styled media watch dog, with its typical kind of breathless headline: 'Is Brian Williams the Next Dan Rather?' Somebody named Al Brown claiming that the Mark Foley instant message story was a prank, and that in breaking it, quote, 'Brian Williams and ABC have already abused the anonymous source dodge at least once in this saga,' and, quoting again, 'Perhaps Brian Williams should resign. But for now, ABC is standing by their story.'"

"Listen, I don't want to tell you how to do your jobs, NewsBusters. I mean, after all, you are the experts. We're just the ideologues trying to feed falsehoods and mistakes to the gullible American public. But don't you think you'd look a little in-the-know and a little less deranged if you didn't write articles in which you suggest that Brian Williams, the anchor of NBC Nightly News, and Brian Ross, the investigative reporter who broke the Foley story for ABC News, that they're the same guy? I mean, if you prefer looking like slovenly political hacks who make the same mistake ten times in an eight-paragraph story, hey, go nuts! You're obviously highly-trained professionals when it comes to humiliating yourselves! But you already know all this. You don't need to get the names or the networks right. Facts, schmacts, keep Page Six in this thing! It's working for you! Brian Ross, Brian Williams, hell, maybe it was Brian Kilmeade from Fox! I'm just saying. NewsBusters and Al Brown, if that is your real name, today's 'Worst Persons in the World'!"

Update 17:40 by Matthew Sheffield. Al's response: This is not the first error I've made, and I'm sure it won't be the last. The honest way to deal with them is to acknowledge them, which I did, not only in the comments, but in the post itself, crediting the NewsBusters reader who pointed it out. In fact, since I doubt that Olbermann waits beside his computer for the "Al Brown" byline to appear, this is most likely how he learned of it.

Perhaps Keith Olbermann, if that is his real name, prefers the ABC/Brian Ross technique of dealing with online errors -- quietly trying to slip them by.