News broke late Thursday afternoon that President Obama had made his selection for the appointee to the position of Assistant Secretary of State to Europe and Eurasia, Victoria Nuland. Normally, that's a snoozer of a nomination unworthy of national media coverage but in this case, it should have garnered media attention.

If the name vaguely rings a bell, it is because Nuland was the spokeswoman for the Department of the State during the Benghazi attacks, and was at the center of the controversy surrounding the watering-down of the administration’s talking points concerning the attack. But it seems that of national television media outlets, only Fox News devoted a significant amount of time to the reporting of this story.

This story was covered on both Fox & Friends and America’s Newsroom for about six times longer than all other major networks combined. In fact, Bill Hemmer, a host on America’s Newsroom, even consulted the opinion of former U.S. Ambassador to the U.N. John Bolton concerning Nuland’s promotion. [Link to the audio here]

The only other coverage of the issue Friday morning was on CNN’s Early Start for less than a minute and MSNBC’s First Look for a mere ten seconds. It is also worth mentioning that both of those shows air at 5 a.m. Eastern, a time where the only viewers are either insomniacs or extremely early birds.

The broadcast network news programs did not cover the issue at all.

So, with this new knowledge, one must wonder why the more liberal networks would not want to cover this particular news story. It could be because it appears that the President is employing a modern version of the Jacksonian spoils system by rewarding Nuland for helping to cover a disastrous lapse in his administration’s security just weeks before a close election.

However, Nuland was not acting on her own when she did so, and there is evidence that she may have been under the direction of her boss, then-Sec. Hillary Clinton. As Brian Kilmeade, a cohost of Fox & Friends, pointed out that “[Nuland] seemed to be the mouthpiece of higher-ups” and that “in the emails she indicates higher-ups in the state department” were the ones who wanted the talking points to be altered to hide their mistakes. This sentiment was reflected by Bolton, who said that “she was doing what her political masters wanted.”

With this appointment, Nuland will have to go through multiple interviews and confirmation hearings in the Senate. This means that she will probably be asked and have to answer a multitude of questions about Benghazi. As Bolton pointed out, she has been “an eyewitness on a day-to-day basis for the last two and a half years for our policy in Libya” which makes this “an excellent opportunity for people to learn more about Benghazi.”

Perhaps, the liberal media does not want to highlight the fact that, as a result of this assignment, new information may come out that will illuminate what happened with the lapse in security and show who is ultimately responsible for Benghazi, a revelation that could potentially derail Obama’s second-term left-wing political agenda.

Below are the transcripts of the Fox News coverage of the issue on both Fox & Friends and America’s Newsroom:

BRIAN KILMEADE: Promoted for playing politics, the woman who wanted the Bengazi talking points changed gets a new job in the state department. Employee Victoria Nuland failing up? We'll examine.

KILMEADE: I don’t blame her at all. She seemed to be the mouthpiece of higher ups who said, hey, CIA …

KILMEADE: In the emails she indicates higher-ups in the state department would like this changed. It doesn't say, I, Victoria Nuland, want this changed. For example, when people get mad at Jay Carney, if you don't like the way he's spinning it, he's not setting the policy.

KILMEADE: Let's switch gears to the Benghazi situation. You know, for a longest time we couldn't figure out why Ambassador Rice went on those talk shows and why the President had one message when he was in the Rose Garden saying an act of terror and then he goes on The View on David Letterman. He went on Univision and several others saying that it was all about this video. Who came up with the talking points that changed what the CIA concluded and what they ended up releasing? Well, it turns out a lot of the interplay, a lot of the e-mails released have Victoria Nuland's name on them. And when it was time to meet the press and explain yourself along the way, it was Victoria Nuland who represented the State Department. So you would think on the surface she might be having a situation in which she might be in a career rut, have trouble advancing, and have trouble shaking the credibility scale.

DOOCY: Not so though. Even though we would love to hear her testify what was going on when she was asking the White House and the CIA on behalf of the department of state to change the talking points. But she has just been nominated by the president to be the new Assistant Secretary of State for Europe.

KOOIMAN: How do you think that makes the families feel of the four innocent Americans who lost their lives when they’re hearing this is all because of a video, when she's whitewashing the talking points essentially? What we are hearing she tried to take out the words la Qaeda, and the dangers associated with Americans there in Libya. How do you think that makes families feel who want justice and now she's getting promoted?

KILMEADE: I do think she was a spokesperson for a lot of people. She would say, hey, I had to get back on the phone with the CIA, my superiors just say they have a problem with the fact that the CIA gave us warning leading in, and they were ignored, and they had intercepts showing al Qaeda was part of it and Nasir Al-Sharia was the ones who did it. Let's take it out and make it generic.

MARTHA MACCALLUM: And then there is this President Obama has nominated a key figure in the Benghazi scandal for a promotion. He nominated former state department spokesperson Victoria Nuland, whose name you have heard a lot lately. She'll be put up for the post of the assistant secretary of state of European and Eurasian affairs, an important position. She is accused of taking part in editing the administration’s talking points after the deadly Benghazi attack. The promotion will require senate approval, so her actions in the aftermath of Benghazi will likely come under scrutiny when she sits before that panel. Interesting move.

BILL HEMMER: Victoria Nuland has been recommended for a promotion. 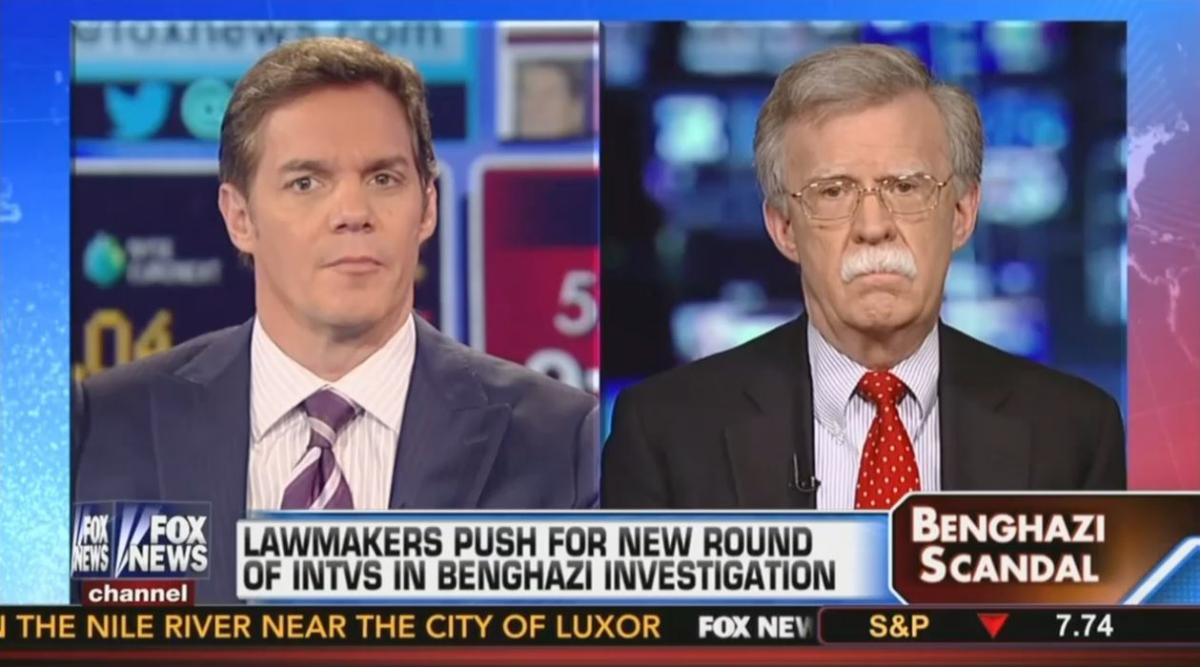 JOHN BOLTON: She is very qualified. There is no suggestion she has done anything wrong with respect to Benghazi, but she’s also an eyewitness on a day-to-day basis for the last two and a half years for our policy in Libya. So, I think there are a lot of interviews she will have to go through, that's the way the game is played in Washington now, and I think this is an excellent opportunity for people to learn more about Benghazi.

HEMMER: Don’t you have an issue with the watering-down of the talking points? Because apparently she was involved in that.

BOLTON: I think she was doing what her political masters wanted, that's what foreign officers should do. The problem is too many of them don’t like to do it in republican administrations. But I want to know, who told her that the talking points were unacceptable. She used the phrase her building management. Was that Secretary of State Clinton? Was that Secretary of State Clinton's chief of staff? Who was it? That doesn’t mean Tori Nuland has doing anything wrong, but I think the questions that she alone can answer are very pertinent to this investigation.