Katie Yoder— Associate Culture Editor with NewsBusters and the Joe and Betty Anderlik Fellow in Culture and Media— is a rising star at the Media Research Center. As part of our 2017 Internship Program Appeal, where generous donors contribute to the continued success of the program, Katie offered some great insights on her challenges and successes since her time as an MRC intern.

Katie is quickly making a name for herself due to her powerful writing and her knack for taking the media and Hollywood to task. Katie’s work regularly appears on NewsBusters and she has made appearances on numerous media outlets including Fox News, EWTN, and HLN to talk about liberal bias in the media and in popular culture, as well as the left’s unrelenting attacks on American values.

Katie has proven to be a strong and relentless opponent against the noxious influence of liberal media bias in society. Starting as an intern in 2011, Katie quickly made herself an asset to the MRC and the conservative movement as a whole.

Katie, tell us about your role at the Media Research Center. What do you do and what accomplishments are you most proud of from your time here?

I serve as the Associate Culture Editor at the Media Research Center. As the Joe and Betty Anderlik fellow, I analyze how the media cover a variety of issues including entertainment, family, feminism, and religion, with a special focus on abortion.

In my current position, I’m most proud of telling the stories the liberal media censor – and giving voice to voices otherwise disregarded. Those stories include the March for Life, the videos exposing Planned Parenthood's harvesting of baby parts, the case of British infant Charlie Gard and the Christian genocide by ISIS in the Middle East.

While I’ve spoken on those topics in interviews with outlets like Fox News, EWTN and HLN, my favorite speaking opportunities include educating teens about pro-life issues and informing conservative leaders of the sparse media coverage of ISIS’ genocide.

You started at the MRC as an intern. What was that experience like? What were the most beneficial skills you picked up during that time?

At the end of 2011, I began my internship with MRCTV, our television and video department. It was there where I learned to video edit, write about media bias, and interview politicians as well as conservative movement leaders on camera.

During the course of my internship, I traveled around the country to cover the Occupy movement, the 2012 Republican and Democrat conventions, and the trial of abortionist Kermit Gosnell. But what made the internship stand out to me was the fact that my supervisors treated me as a full-time employee – and encouraged me to take initiative and start video projects of my own. It worked: by the end of my internship, my work had attracted 5 million views.

I use routinely use and build on my knowledge from the MRCTV internship. I recently interviewed former Pussycat Doll Kaya Jones on Hollywood elites pushing sex and abortion on young women. Also this year, I filmed pregnant teen Maddi Runkles speaking at a rally – footage that was picked up by media including ABC News and Fox News. Last year, I created a video of media reactions to President Trump's election that reached more than four million views.

How does the MRC Internship Program equip young people to make an impact on the conservative movement and take on the liberal media?

The millennial generation – my generation – is especially under attack by the liberal media today. We consume the news through more avenues than ever before, from magazines and television to phone apps and social media.

That’s why this internship program is vital. It teaches future conservative leaders to view the liberal media critically, instead of believing everything we hear. It grows and educates young conservatives, ensuring that free enterprise, limited government, and traditional values have a voice in the news. It prepares us with life skills, practical job experience and a support network while solidifying our conservative values.

There are internships available in all of our departments: CNSNews.com, NewsBusters, MRCTV, Business, Culture, tech, development and marketing. Regardless of placement, the internship also offers young conservatives bimonthly seminars, where our staffers instruct interns on everything from social media to resume building.

Our internship boasts a lasting impact. The interns we don’t hire ourselves land jobs at numerous other conservative and news organization. Our former interns are at places like Fox News, The Daily Caller, Washington Examiner, The Heritage Foundation, Free Beacon, The Blaze, and IJR.

What would you say to someone considering donating to the MRC Internship program? What impact can a donor make by supporting this program?

Those who fund the intern program help educate a young, vibrant conservative generation to safeguard conservative values, and hold our nation’s liberal media accountable. You make the future of conservatives – and careers like mine – a reality.

I would like to especially thank those who have already invested in our internship program. It’s because of you that my work today is possible – and the work of hundreds of trained and educated conservatives (more than 270 interns in the past 10 years). YOU jump started so many of our careers. Thank you.

Katie is a great example of the type of young conservative who completes the MRC Internship Program— smart, tough, dedicated, and ready to challenge liberal media bias at every turn. The threat of liberal media bias is real. But due of the dedication of young people like Katie, we can be sure it will not win. 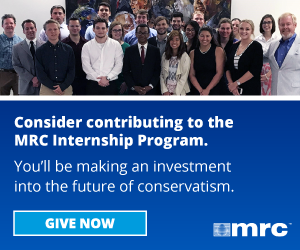 The MRC Interns are the future of the conservative movement. And because of them, the future looks bright.