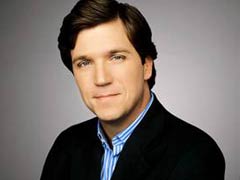 With all the news aggregator style websites around-the Huffington Post, the Daily Beast, Stimulist, and True/Slant just to name a few-why does Tucker Carlson think he can have success with a new one?

It's true that none of the news aggregator sites have a conservative slant to them, so this site may attract a crowd of conservatives, but it will require a lot of work on Carlson's part, time that he may not have with his move to Fox News. Carlson told the Wall Street Journal, "One thing feeds the other. I wouldn't do something that wasn't too integrated into my life."

The site is going to emphasis constant updates and original reporting on aspects of Obama's administration that have been ignored by the press.  "There just aren't enough people covering this administration and telling the people what's going on," Carlson said.

But is Carlson the right person to take on the task of launching a conservative news aggregator site?

He is not one of the most popular political personalities to either conservatives or liberals. He was booed at CPAC for calling the New York Times an accurate newspaper.

"The New York Times is a liberal paper. ... But, it's also a paper that actually cares about accuracy. ... They are out there finding the facts and bringing them to people. Conservatives need to mimic that in their own news organizations."

Perhaps that is why he's starting a website to engage in original reporting.

In an interview with me, Malkin said,

"I think this shows a cluelessness about the blogosphere for [him] to go to CPAC and not be aware of the depth of original reporting on the right side of the blogosphere that is already going on. I think that it would be a mistake for him to pose as something new and fresh, to ignore the spontaneous order of what citizen investigative reporters are already doing."

Malkin said that the liberal media feeds the perception that conservative blogs do not investigate enough by ignoring conservative investigative stories. While Talking Points Memo received a lot of attention for their reporting on Bush firing attorneys, she said "Patterico over the last several years has done amazing investigative work ... but he's not going to get any citizen watchdog awards for that because he's encroaching on liberal-mainstream media territory."

Malkin posted a wrap up of investigative stories reported by conservative blogs in the past year this January.

Furthermore, she said, "We don't need a Huffington Post. I don't know why he didn't just sell it as ‘Tucker Carlson's website.' ... A lot of these folks who try to make a splash in the blogosphere raise expectations in an inflated way."

Carlson responded to Malkin's comments by saying, "I hope Michelle will take a close look at the site when it's out. I think she'll like it."

Malkin did say that she thought Carlson's experience in print journalism will help and that she wished him success.

Malkin may not think the conservative movement needs their version of the Huffington Post, but the Huffington Post has become so influential that it becoming one of the go-to places even for Republicans to get their message across.

It would only help to have a site focusing on original reporting that might drive news discussions. But if Carlson needs a reminder of how tough his task will be, he needs only to remember Culture11. Started as a libertarian news aggregator site with lots of hype and funding from Bill Bennet and Steve Forbes, the site lasted only five months from September to the end of January.