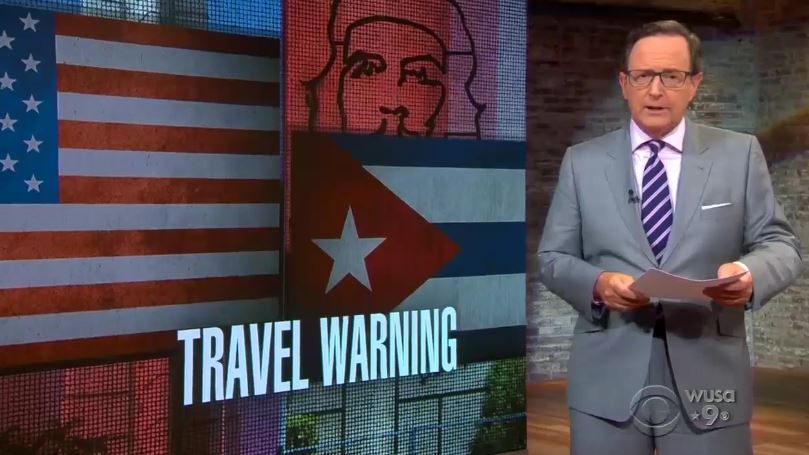 After the Trump Administration on Friday pulled some U.S. diplomats from Cuba and restricted travel to the island nation following a series of attacks with acoustic weapons, both the CBS and NBC evening news broadcasts suggested that the United States, and not the Castro dictatorship, was the problem.

On September 29, CBS Evening News anchor Anthony Mason implied that the issue undermining U.S./Cuba relations was the Administration’s reaction, rather than the debilitating attacks: “The Trump Administration today slashed the U.S. diplomatic presence in Cuba, and warned Americans not to visit…It marks a sharp about-face in U.S. relations with Cuba, which had been improving during the Obama years.”

Despite Mason’s claims, the attacks actually started in November of 2016, while Barack Obama was still president. While this was after the presidential election, it was months before Trump would take office. Furthermore, it was during these attacks, which lasted for months, that President Obama ended the long-standing “Wet Foot, Dry Foot” policy in January of 2017.

Ignoring how it undermined her network’s slam of the Trump Administration, correspondent Margaret Brennan noted that “Canadian diplomats suffered similar attacks, but their government is not warning against travel to Cuba.” While the network was quick to criticize the United States for pulling Americans from Cuba following the attacks, there was no criticism of the Canadian government for leaving its citizens in Cuba despite the attacks.

While including Cuba’s foreign minister’s argument that the Cuban government “was not behind it,” Mitchell’s report included no suspicion of the regime. Instead, she turned her focus to another target: Russia. “The bizarre attacks coming two years after the U.S. reopened its Havana embassy, ending a half century cold war. Supporters of diplomatic relations suggest Russia could be to blame, trying to break up Havana's fledgling relationship with the U.S.” To back up this claim, Mitchell turned to Democratic Senator Patrick Leahy, “If we were suddenly to leave, Russia benefits by that a great deal.”

For contrast, ABC’s World News Tonight ran the type of report on this topic that the other two networks should have: stating the facts largely without interpretation, and noting simply that “officials say they can't rule out that Cuba, Russia, or some other third party is behind the attacks.”