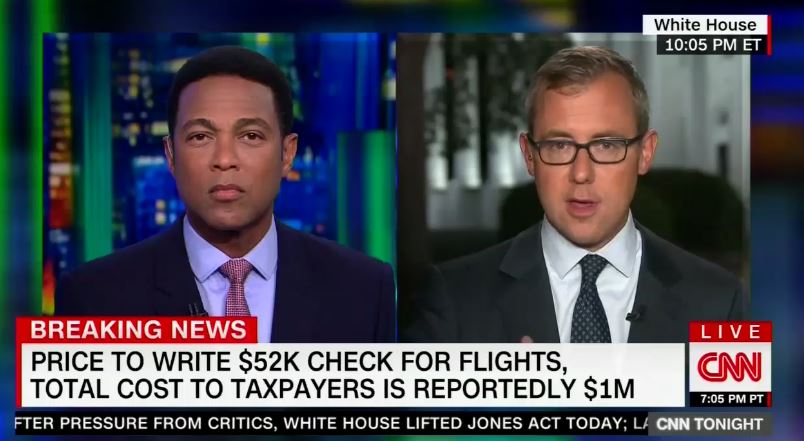 The double standard at CNN is stark. The cable news network can’t seem to find much time for the three-week long unfolding drama of the corruption trial of sitting Democratic Senator Robert Menendez from NJ. But it found nearly 2 hours in just one day to cover HHS Secretary Tom Price’s flights on private jets (this coverage was all before Price's resignation).

The prosecution presented evidence Thursday which suggested that Menendez of manipulating a shipment from the United States to the Dominican Republican in order to benefit Salomon Melgen, the same wealthy friend who reportedly also gave Menendez $60,000 in bribes. But these latest accusations received no coverage on CNN at all. In total, CNN has only spent 16 minutes, 47 seconds on the entire trial since September 5 (the day before the trial began). 61 percent of this coverage (10 minutes, 16 seconds) was reported by Jake Tapper, with most shows including CNN Tonight With Don Lemon, Anderson Cooper 360 and Reliable Sources not reporting on the Menendez trial at all.

Yet, in just 24 hours, from when Politico first reported on September 28 about this latest Menendez trial update, CNN has spent 1 hour and 50 minutes covering the controversy surrounding Price’s use of private jets on the taxpayer dime.

CNN, and all media sources, should cover both sides critically. However, the network has shown time and again that it covers negative stories about conservatives, while burying those for liberals. Out of the 110 minutes spent on covering Price, why couldn’t CNN spare even a minute or two for an update on Menendez?