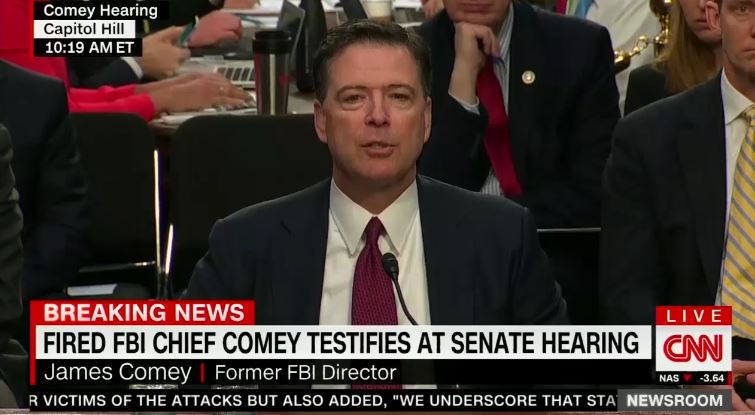 Former FBI director James Comey confirmed that a New York Times report which accused Trump associates of “repeated contacts with Russian intelligence” was “almost entirely wrong,” during his testimony before the Senate Intelligence Committee on June 8. He also said that “many, many” news stories “purportedly” based on classified information were “just dead wrong.”

Yet, back in February when it was released, CNN not only promoted this New York Times report, based on allegedly leaked information – they came up with a nearly identical report of their own, and bashed Trump and his administration for questioning it.

After playing a clip of ABC News’s Jonathan Karl asking Sean Spicer about the report, CNN New Day host Chris Cuomo mused on February 15, after Spicer failed to admit that the report was accurate, “But how can that be true if the reporting from The New York Times and our reporting with [Jim] Sciutto and the rest of the team is true?”

On Early Start on February 15, co-host John Berman used the report to mock Vice President Mike Pence for calling accusations of collusion between the campaign and Russia a “distraction,” and “part of the narrative to delegitimize the election and question the legitimacy of his presidency.” Berman snidely remarked, “So, ‘Of course not’, says Mike Pence. Of course, the reporting from CNN and The New York Times this morning is that there were contacts between campaign officials, Mike Flynn, also Paul Manafort, with some Russians during the campaign.”

Later the same day, on CNN Newsroom, Berman asked The Washington Post White House Bureau Chief Phil Rucker “You have this new reporting on Russian contacts going back throughout the campaign. How much trouble is the White House in over this and who will apply the pressure?”

On ABC’s Good Morning America on February 24, anchor George Stephanopoulos quipped “And, Matthew [Dowd], one of the things we're also seeing playing off this report overnight that Reince Priebus talked to the FBI about Russia. This story is going to continue to embattle the White House as long as the FBI intelligence committees are investigating.”

National Security Correspondent Jim Scuitto, on CNN Newsroom on February 24 said, “Multiple U.S. officials tell CNN the White House sought the help of the bureau and other agencies investigating the Russia matter to say that the reports were wrong and that there had been no contacts, these officials said…You may recall that CNN and The New York Times first reported on this just over a week ago and so far the White House has not commented on the record. I should say that the FBI is still investigating these alleged communications.”

In his June 8 hearing, the former FBI Director said that, “there’ve been many, many stories purportedly based on classified information, about – well, about lots of stuff, but especially about Russia that are just dead wrong.”

Later in the hearing, Sen. Tom Cotton asked, “On February 14, published a story, the headline of which was ‘Trump Campaign Aides Had Repeated Contacts With Russian Intelligence.’ You were asked earlier if that was an inaccurate story, and you said in the main. Would it be fair to characterize that story as almost entirely wrong?”