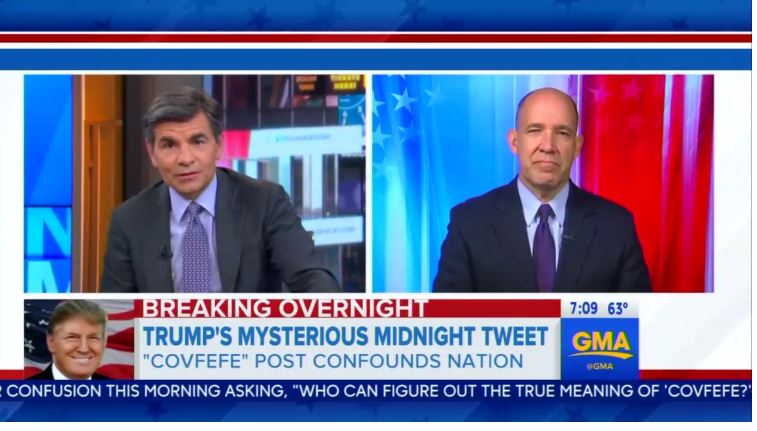 At midnight on May 31, President Trump tweeted the enigmatic “Despite the constant negative press covfefe.” Despite that fact that most people, including journalists, make typos, the media pounced. On just the morning news shows of ABC, CBS and NBC, there was a baffling ten minutes of coverage devoted to speculating about what Trump meant by this gibberish word that in context was clearly supposed to mean “coverage.”

Thankfully, the networks are there to protect us mere mortals from our own ignorance. Over on NBC’s Today, host Savannah Guthrie pondered, “And Peter, let’s go back to this tweet for a minute. I mean, a typo is just a typo. It's not the end of the world. The president himself poking some fun at it this morning. On the other hand, does it signal any larger concern? I keep remembering Melania Trump saying on our town hall that she wishes the President would stop tweeting. Is this a concern inside the White House?”

NBC White House Correspondent Peter Alexander responded with concern, “Yeah, he certainly hasn't stopped tweeting despite that advice. I mean, sure, this is funny for a moment, but it does raises real questions. First of all, account security. Who tweeted it? Was it the president? Was it his social media director? Which other aides have his password? Is it on their personal phones? And what if he'd been announcing something a bit more serious. That would seem farfetched, but anything is possible.”

To his credit, CBS Chief White House Correspondent Major Garrett realized there wasn’t much of a story here: “But also, it's worth pointing out, at the time when Manchester, England; Baghdad, Iraq; Egypt and now Afghanistan have suffered horrific terroristic attacks and there are ongoing questions swirling here at the White House about the conduct of Jared Kushner, Senior White House Advisor, during the Trump transition. It reminds all of us that it’s important here to keep focused on the important, as opposed to just the interesting.”

CBS This Morning spent the least amount of time on this topic, with 1 minute, 14 seconds. ABC’s Good Morning America had the most at 5 minutes and 15 seconds, and NBC’s Today followed at 3 minutes, 30 seconds.

President Trump seemed to realize the flurry of media attention his tweet was getting. A few hours after the initial tweet, he tweeted out “Who can figure out the true meaning of ‘covfefe’??? Enjoy!”