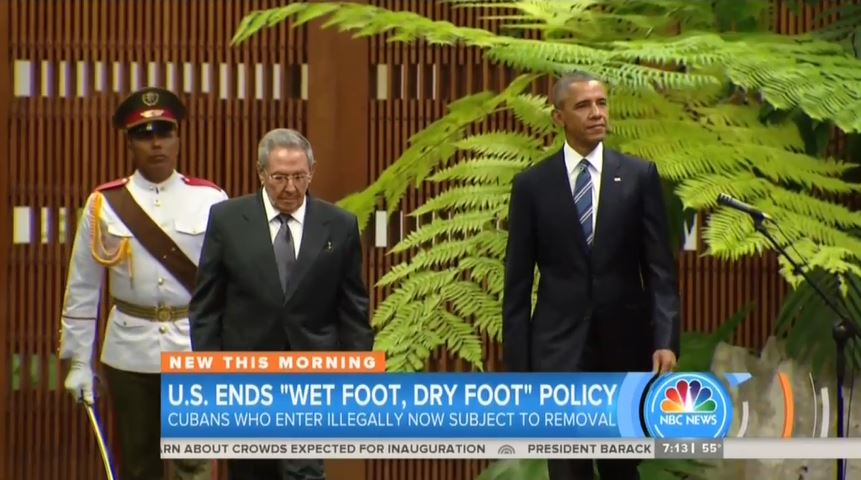 The broadcast news networks barely even mentioned the latest significant overhaul of U.S. policy by the Obama Administration.

For two decades, the United States has granted asylum to Cuban fleeing the Castro regime who make it to American soil, a policy known as “wet foot, dry foot.” Now, in his final days in office, President Obama has ended this policy, to applause from the Cuban government.

According to NBC’s Today, “The policy change has been in the works for several months, as the U.S. and Cuba work to cement changes in their relationship.”

Last night and this morning, ABC, CBS and NBC dedicated a paltry 86 seconds to this news. ABC was the worst with a stingy 15 seconds of coverage, while CBS came in close behind with 23 seconds.

It’s no surprise that the networks wouldn’t show much interest in this backsliding of U.S. policy. All three networks have praised both the Obama Administration’s change in policy towards Cuba, and the Cuban government on multiple occasions. When Fidel Castro (who is estimated to have killed seven to ten thousand people) died in November, Charlie Rose had hailed him as a “revolutionary hero,” touting the “thunderous” dictator’s “legacy.”

During another This Morning broadcast, correspondent Margaret Brennan wondered if the influx of U.S. business to the poverty-stricken nation would “endanger Cuba’s unique charm.”

On NBC’s Today, correspondent Kerry Sanders boarded the first cruise from the United States to Cuba, and worried with a fellow American tourist “Do you feel you’ve gotten here before it changes?” NBC is the same network where Andrea Mitchell, who lectured a detained Cuban dissident on President Obama’s meeting with Raul Castro back in March, and praised President Obama and Castro attending a baseball game as "just two fans sharing a pastime."