Networks Cover for Hillary on Wikileaks, Ignore Mention of Other Journalists 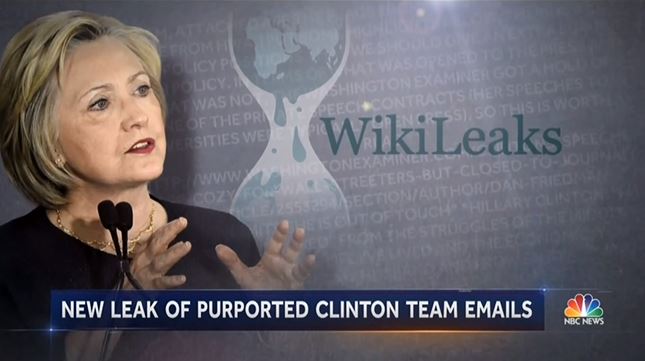 Since Friday, ABC, CBS and NBC have inundated viewers with more than 200 minutes on a tape showing Trump making inappropriate remarks. However, these same networks gave 24 minutes, 5 seconds to the Wikileaks release of multiple years’ worth of e-mails from Hillary Clinton’s staff – but very little of this coverage was on specific emails or issues that were brought up by the emails.

On NBC’s Today on October 8, correspondent Kasie Hunt mused that “but at the same time here, there are no major bombshells in these documents, if they are authentic, that really stands up to the magnitude of that story about Donald Trump. And many Democrats I’ve talked in the last 12 hours, privately saying they think this race might already be over.”

That quote sums up the constantly repeated media narrative of 2016: Trump controversies eat up the news cycle, but Clinton controversies are almost nonexistent. Journalists go out of their way to ignore or dismiss Hillary’s failures, while gleefully hyping any negative news for Trump.

Political analyst Matthew Dowd, on ABC’s Good Morning America on October 8 observed that “She's going to have to handle it [the leaked excerpts from her speeches], but when you look at this massive thing that's going on in the last 24 hours we are getting lost, this is getting totally lost. We're not going to be talking about this for the next 24 hours leading up to the debate. She's flawed. It's a problem. But whether you compare it to what Donald Trump is going to -- there's no comparison.”

Many of these new topics were ignored by some or all of the networks, and not once did any of them ever touch on any e-mails mentioning the cozy relationship that the Hillary campaign has with journalists. Here's a rundown of what's been covered and what's been ignored, as of Wednesday morning's news programs:

E-mail from Clinton Campaign spokesman Brian Fallon mentioned that “DOJ folks inform me there is a status hearing in this case this morning,” implying a collaboration between the Hillary campaign and the Department of Justice during the investigation into her e-mails:

Brian Fallon e-mailed that the DOJ was about to release court filings of Hillary’s e-mails. Although accused of collusion with the DOJ (again). After the release of the e-mails, Hillary’s campaign insisted that this information was publicly available at the time.

Then-chief adviser to Bill Clinton, Doug Band, complained that Chelsea Clinton was “acting like a spoiled brat kid who had nothing else to do but create issues to justify what she’s doing”:

Starbucks CEO, Howard Shultz, confessed that he was concerned that Hillary's tone seemed “stale with very few signs of the kind of freshness and transparency” that Americans wanted to see:

In an e-mail, Brian Fallon accused Russia of pushing pro-Trump propaganda. This was before Russia was accused of being involved in the Wikileaks hacking:

E-mails showed Hillary staff trying to figure out how she could oppose the Keystone XL pipeline without seeming like she was contradicting President Obama:

Excerpts from e-mails show Hillary during Wall Street speeches revealing that she would have one position on trade publicly and another privately. During the second presidential debate, Hillary argued that this comment was referring to how the Stephen Spielberg movie “Lincoln” portrayed Abraham Lincoln’s approach to sensitive policy issues.

General discussion of how the emails came to be leaked, without any mention of individual emails:

Revelations that were never discussed at all on any network:

■ Friendly e-mails between Clinton staff and the press. These e-mails included numerous, friendly back and forth conversations between CNBC host and former presidential debate moderator John Harwood and the Clinton camp.

■ Former Politico reporter Maggie Haberman being described as having a “very good relationship” with the Hillary campaign.