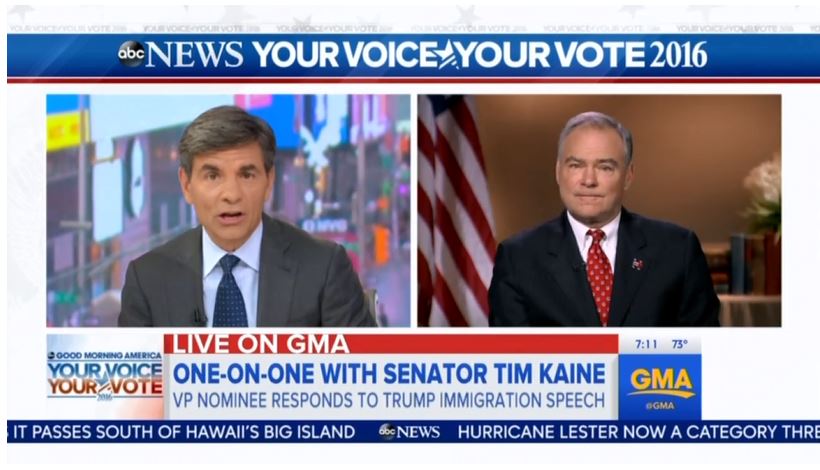 “Finally, on a different subject, Colin Kaepernick who has been having that protest refusing to stand for the national anthem expected to do it again tonight at a game that's supposed to be honoring military veterans as well. You're the father of a Marine. What is your reaction to Colin Kaepernick?”

Nowhere in that question was any mention of the fact that Kaepernick had revealed that he thought Hillary should be in prison. In a statement to the press on why he refused to stand for the National Anthem, Kaepernick ranted, “You have Hillary who has called black teens or black kids super predators, you have Donald Trump who’s openly racist. We have a presidential candidate who has deleted emails and done things illegally and is a presidential candidate. That doesn’t make sense to me because if that was any other person you’d be in prison. So, what is this country really standing for?”

Maybe Stephanopoulos would have found the time to ask Kaine about Kaepernick bashing Trump if it wasn’t so inextricably sandwiched between two anti-Hillary rants.

Kaine’s response to this question was predictable and diplomatic. He stated that he didn’t agree with what Kaepernick did, but “you’ve got to respect people’s ability to act according to their conscience.”

GEORGE STEPHANOPOULOS: Let's hear from her partner, Democrats’ candidate for vice president senator Tim Kaine, Senator Kaine, thanks for joining us again. Let’s start out with --

STEPHANOPOULOS: Let's start out with Donald Trump's day. We heard those comments from John Podesta, the campaign chair for Hillary Clinton, but didn't Donald Trump gain some stature by appearing side by side with the Mexican president?

KAINE: You know, George, I don't think so. I think it was kind of a diplomatic embarrassment. We'll get to his speech later but he's been talking for a year about we're going to build a wall and Mexico will pay for it. Then he goes and he sits down and goes eyeball to eyeball with the president of Mexico. And what he forgets suddenly to bring it up, or he's too afraid to bring it up, or he chokes in the meeting. It's just kind of an indication that the guy talks out of both sides of his mouth, and when he’s given an opportunity to address his -- the central rationale of his entire campaign he doesn't do it. And that's not the kind of strength you need in somebody who is going to be conducting bilateral discussions with the leaders of any nation.

STEPHANOPOLOUS: You say he's talking out of both sides of his mouth. Yesterday the Republican party put out a video talking about Hillary Clinton's flip-flops on immigration. Let's take a look.

STEPHANOPOULOS: And over the years she has moved towards more liberal issues like the wall, on deportation, on benefits for undocumented immigrants.

KAINE: You know, George, I -- that's not the way I look at it. There was an immigration reform effort done when Hillary was a senator in 2006 when George Bush was president. She was a strong supporter of comprehensive immigration reform in 2006. You remember that came up in the primaries as a key point of difference between her and Bernie Sanders.

And as I've campaigned all across the country, especially in the Latino community they understand that Hillary has been trying to do comprehensive immigration reform for many years. This is not a new thing for her. There is a consistency to her position. And that's why she said, look, in the first 100 days we need to, 30 years after the last reform, you know, build a comprehensive package that includes basically support for dreamers, that includes supporters for employers, that includes a path for hard working people to earn the ability to stay here as citizens over many years and also border security. Those are the kill pillars of the plan. Keeping families together – it’s very different from the division and deportation nation strategy of Donald Trump.

STEPHANOPOULOS: Meanwhile, Trump does appear to be closing the gap in some of these national polls right now. They are tightening. And our new poll shows that secretary Clinton is now as unpopular as Donald Trump. You see her at 59% unfavorable. He's at 60% unfavorable. How do you explain it and how do you fix it?

KAINE: Well, look, this is going to be a tough race and I didn't have any illusions about it and Hillary Clinton doesn't either. We have felt from the beginning that this would be tough. We -- going into the convention it was pretty much a dead heat and like what we've seen since both conventions, because we put up a bit of a lead in most of the battleground states, but it's not a big lead and that just means weaver to make our case every day. Hillary while Donald was doing his high-profile talking messages on the border she was at the American legion in Ohio talking about America's role in the world to that important veterans’ organization. We're going to have to make our case about the economy that works for everybody and we're stronger as a nation if we build alliances rather than tear up appliances and build walls.

STEPHANOPOULOS: Finally, on a different subject, Colin Kaepernick who has been having that protest refusing to stand for the national anthem expected to do it again tonight at a game that's supposed to be honoring military veterans as well. You're the father of a marine. What is your reaction to Colin Kaepernick?

KAINE: You know, I -- you got to respect people's ability to act according to their conscience. I mean, I'd do it differently. I think if you really thought about issues, and about this country, you'd do it differently. And when I heard him explain his rationale it didn't really make that much sense to me. But you’ve got to respect people’s ability to act according to their conscience, so I wouldn't presume to tell him what to do.

STEPHANOPOULOS: Senator Kaine, thanks for joining us this morning.

KAINE: All right, thanks, George.