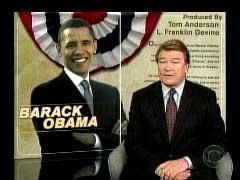 Is America ready for a black president? This was how CBS’s Steve Kroft portrayed the presidential candidacy of Illinois Senator Barack Obama in a piece on the February 11th "60 Minutes." In an interview that touched on Mr. Obama’s personal life story, his lack of experience and his past drug use, Mr. Kroft seemed most interested in discussing race, and by implication the notion that America is racist. Kroft seemed shocked when Senator Obama asserted that his race would not be a factor in the race, and that America is ready for a black president:

Steve Kroft: "Do you think the country is ready for a black president?"

Steve Kroft: "You don’t think it’s going to hold you back?"

Mr. Obama insisted that if he lost the campaign, it would not be because of his race, but because he failed to articulate a vision that the American people can embrace. Despite this insistence, Kroft later brought up the subject or racial violence. The CBS correspondent reminisced about Colin Powell and his wife, Alma, who didn’t want him to run because she was afraid for President because she feared he could be killed, and wondered if Mrs. Obama felt the same way:

Steve Kroft: "This is a tough question to ask, but a number of years ago, Colin Powell was thinking about running for president, and his wife Alma really did not want him to run, she was worried about some crazy person with a gun. Is that something that you think about?"

Mrs. Obama’s response was peculiar, that as a black man, her husband could get shot going to the gas station. Yet, isn’t that a danger that anyone could face, regardless of race?

Race was not the only subject discussed, as Kroft did touch on Obama’s lack of experience. Kroft lobbed this tough sounding soft ball question:

"What makes you think that you’re qualified to be president of the United States."

Later Kroft elaborated somewhat on Obama’s political philosophy, but refused to describe him as liberal:

"He is a left-of-center Democrat who favors abortion rights, universal health care and wants to roll back tax cuts for the wealthiest Americans. He's the only major presidential candidate who opposed the Iraq war before it began and wants to withdraw most US troops by March of next year. He would redeploy some of them to Afghanistan, keep others in the region to protect strategic US interests."

But his only policy question centered on whether Obama would talk to Iran and Syria. Does Obama believe we would have been better off with Saddam Hussein still in power? Or what are the dangers of withdrawing from Iraq too quickly? Could it lead to a major region wide conflict in the Middle East? And on the subject of taxes, how does Mr. Obama define the term  'wealthiest of Americans?' These questions went unanswered because they were not asked.

Americans deserve answers to tough questions from all political candidates, but especially those running for President. Yet, Mr. Kroft went soft on Obama, perhaps for the same reason other media outlets have. As Kroft noted, Obama's candidacy has been "propelled by the media, hungry for a fresh face and a good story..."