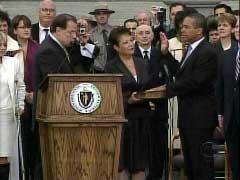 Tuesday’s CBS "Evening News" aired a soft-news puff piece on liberal Massachusetts Democratic Governor Deval Patrick that sounded more like a campaign ad than a news story. Missing from the piece were the words Democrat and liberal or any mention of Mr. Patrick’s policy priorities. CBS’s Richard Schlessinger highlighted Mr. Patrick’s background and fawned that he "had always been a trailblazer." Evening News anchor Katie Couric in a tease wondered "how does a kid from the mean streets end up as governor?" Both Couric and Schlessinger noted that Governor Patrick had grown up in a rough Chicago neighborhood.

However, on November, 13, 1994 the CBS "Evening News" was not so kind to African American conservatives like Rep. J.C. Watts. Instead of soft personal profiles, they were portrayed as "openly and vehemently endorsing Republican themes," and, yet, "in a position to ask tough questions of the new Republican leadership." Which is it, CBS? Even in mentioning  Watts, that a new African American had been elected to Congress in the 1994 elections, CBS qualified the achievement by adding, "only he’s a Republican."

Mr. Patrick’s story is one of living the American Dream and making the most of the opportunities life presents, and he should be commended for that. However, there are many people in America who have similar stories to Governor Patrick’s, most of whom will never be the subject of a fawning CBS story. But CBS’s piece should also have focused on what he is doing or plans to do in Massachusetts. Does he endorse Democratic themes? Will he ask tough questions of the Democratic leadership? But how can CBS bring those questions into play when they won’t even label him a Democrat? For more of an idea of what CBS omitted from its report, click here.

Katie Couric (Tease): "Still ahead tonight, how does a kid from the mean streets end up as governor? The lucky break that gave Deval Patrick his start."

Couric: "Deval Patrick has always been a trailblazer. He was the first in his family to go to college -- Harvard, no less -- and recently he became only the second African American to be elected governor of a state. Not bad for a kid from the south side of Chicago. His lucky break, though, was meeting a teacher who believed in him and helped him believe in himself. Here's Richard Schlessinger."

Richard Schlessinger: "For too many people who grow up on this side of Chicago, South Wabash Avenue is a deadend street and it could have been a dead end for Deval Patrick."

Richard Shclessinger: "It's a long way from a south Chicago row house to the Massachusetts state house. Deval Patrick made that journey, and he's just made a little history."

Deval Patrick: "So help me God."

Richard Schlessinger: "His climb to the top of Beacon Hill started when he was just a school boy. Lucky for Patrick, Darla Weissenberg was his seventh grade teacher. She had about100 students, but she noticed him."

Darla Weissenberg: "He had just a groundedness, a kind of comfort with who he was."

Richard Schlessinger: "And as luck would have it, she stumbled upon a national program that gets gifted, low-income kids into top private schools and pays their way."

Darla Weissenberg: "To me it was like, you know, winning the lottery or something."

Richard Schlessinger: "So Patrick left this neighborhood for this neighborhood, Milton Academy, outside Boston. He was used to being afraid on the streets of Chicago, but this was a different kind of fear."

Richard Schlessinger: "In Patrick's own words, this wasn't just a different place. It was a different planet. And it quickly became the center of his universe. Milton led to Harvard, then Harvard Law, and a successful career in government and industry. And then, this, victory last election night.

Background Music: "I can feel my soul ascending."

Richard Schlessinger: "It was a landslide in a state with a troubled racial past, and at the center of it all was Darla Weissenberg's former student. I have a friend who is fond of saying, ‘I'd rather be lucky than good.’"

Darla Weissenberg: "Well, you know, in Deval's case, I think he's both."

Richard Schlessinger: "Have you thought about what your life would be like if you had not crossed paths with Mrs. Weissenberg?"

Deval Patrick: "I have. I have, and it's very, very hard to imagine what might have been."

Richard Schlessinger: "The new governor of Massachusetts learned at least one important lesson from his seventh grade teacher, that sometimes when you start out on a street like this, being the smartest kid on the block just isn't enough. Richard Schlessinger, CBS News, Boston."