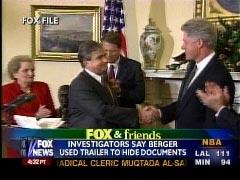 Kudos to "Fox and Friends" as they were the only morning news program on Thursday to extensively cover the Sandy Berger story. Mr. Berger, former National Security Adviser to President Clinton, pled guilty in federal court for stealing classified documents from the National Archives, but a Wednesday AP story revealed that the details of Mr. Berger's offense were far more damning then we had previously known including that he hid  the documents in a construction site before destroying them.  CNN’s "American Morning" and ABC’s "Good Morning America" both offered brief news reads on the subject. CNN’s coverage totaled 24 seconds while ABC’s totaled 23 seconds. CBS’s "Early Show" and NBC’s "Today" both ignored the story completely.

While ABC, CNN, and Fox News all reported that Sandy Berger took documents from the National Archives, hid them, and destroyed them, only viewers of Fox learned that Mr. Berger had taken multiple copies of the same document in an apparent attempt to get rid of all copies of it:

Steve Doocy: "That's right he had taken five copies of the same document out. Now doesn’t that sound, out of the National Archives. Doesn't that sound like he was trying to get rid of all the existing copies?"

And only viewers of Fox and Friends learned that when the National Archives got the documents back from Mr. Berger, the documents were so unorganized that they aren’t sure all pages were returned.

Given the gravity of the offense, stealing and destroying classified national security documents, one may expect the media to inform the public of such a conviction and such a brazen act. However, the cursory media coverage should not come as a surprise to anyone. According to a July 21, 2004 MRC Media Reality Check, when the Berger story first broke in 2004, the media acted as defense attorneys for the former National Security Adviser, and demonstrated greater outrage at the timing of the news than at Mr. Berger’s breach of national security. For example, Dan Rather protested the story’s timing:

"This was triggered by a carefully orchestrated leak about Berger, and the timing of it appears to be no coincidence."

Both ABC and CBS attempted to frame the Berger Story in a partisan Republicans vs. Democrats theme, but Pierre Thomas of ABC at least acknowledged "some of the information [removed] was apparently critical of Clinton’s anti-terror efforts."

Berger attempted to keep these documents from the "sainted" 9/11 Commission which was investigating what led to the terror attacks. Democrats have promised to enact all of this Commissions anti-terror recommendations. But how sound can the recommendations be when there was a concerted effort by Mr. Berger to withhold information from them? The media have fawned over the 9/11 Commission, yet they don’t appear outraged that a witness attempted to thwart the investigation. Perhaps the 9/11 Commission is not as sacred to the media as the reputation and legacy of their hero, Bill Clinton.

Transcripts, as provided by the MRC's Megan McCormack, Scott Whitlock, and Justin McCarthy, of the CNN, ABC, and Fox News stories follow.

Kate Snow: "There are new cloak-and-dagger details about the theft of classified documents by a Clinton administration official. A government report now says former national security advisor Sandy Berger took the documents from the National Archives in 2003, hid them under a construction trailer and later destroyed some of them. Berger pleaded guilty and paid a $50,000 fine, but he never served any jail time."

Soledad O’Brien: "In Washington, D.C., new details from a national archives watchdog group on how Sandy Berger stole classified documents back in 2003. He was supposed to get a report about U.S. terror threats during the Clinton administration to the 9/11 Commission. Instead, they say, he stuffed copies in his suit pockets and hit him at a construction site and then went back for more. Sandy Berger's already paid a fine and served public service for the theft."

Brian Kilmeade: "It's so much worse than I originally thought. I'm talking about Sandy Berger, the national security council."

Brian Kilmeade: "The NSA advisor to this guy named President Clinton. Sandy Berger decided that when it was time to investigate what happened on 9/11 and what, what we ignored upon the lead up to 9/11, that he would go back and jog his memory by going to the National Archives and going over the documents that was so much a part of his life during his reign in the White House."

Steve Doocy: "That's right and now here's the thing. We know parts of that, Brian. But thanks to the fact that the Associated Press got the National Archives, what had been a classified report, released under the Freedom of Information Act, now we know a lot of the details."

Lauren Green: "Well, he actually needed more jogging to his memory than he thought that he-"

Steve Doocy: "Well, he was, he was cramming to, to testify before the 9/11 Commission."

Brian Kilmeade: "So he grabbed some scissors."

Brian Kilmeade: "We don't know if they were in his socks or not."

Brian Kilmeade: "But we do know that he was leaning over a few times he says 'my socks constantly fall down.' But what we do know-"

Steve Doocy: "Well, maybe that's why he is grimacing like that. 'Ouch, I can't sit down. My socks hurt, my pants hurt, I got documents in my pants."

Lauren Green: "You know, that's why they made elastic. Because, the socks would just stay up, so maybe he just bought cheap socks."

Steve Doocy: "They invented elastic for document fraud for, for a guy who worked as one of president's most trusted advisors? So he's absolutely, he apparently had told people, 'yeah, I don't, I don't remember any of that stuff.' But then when they said, 'we've got the goods on you, Sandy, you better come clean.' He said 'Ok I've a couple of copies.'"

Brian Kilmeade: "Because they numbered them. Because they knew that he was taking documents out. So the workers there numbered them and said, 'I don't know what you're talking about.' He goes, 'well, wait a second we do know because they're numbered.' He said 'OK, I'm sorry, I took them.' He said, so it turns out he not only took the documents. Four of the five with scissors he sliced that were unrecognizable. And in a report to the White House, they said these things were so unorganized they have no idea if they got all the documents back or not from Sandy Berger."

Steve Doocy: "That's right he had taken five copies of the same document out. Now doesn’t that sound, out of the National Archives. Doesn't that sound like he was trying to get rid of all the existing copies?"

Steve Doocy: "Absolutely and then to three of the five he took scissors, as Brian said, and cut them all up. And the other two, he put in his garbage. Now Sandy Berger's attorney, Lanny Breuer, says, 'oh don't worry the 9/11 Commission was able to get that stuff through other sources.' We don't know who the other sources are. Maybe it was former President Clinton. It certainly wasn't from Sandy Berger. Also, one of the, one of the other ways that it all fell apart for Mr. Berger was the fact that one of the employees at the National Archives came in, and he was messing with his leg and he was going like this. And apparently the employee could see a document sticking out of his pants."

Brian Kilmeade: "It is outrageous."

Lauren Green: "What I don't understand though is he got off light for this."

Lauren Green: "This is very interesting. Why is it that he actually took documents out of the National Archives and basically got a slap on the wrist?"

Brian Kilmeade: "$50,000, 100 hours of community service and now he's free. And as I started with this entire segment, it's so much worse than we originally thought."

Brian Kilmeade: "And it was 1999 is where they focused on the millennium bombing plot, a plot that was stopped at the Canadian border. However, what did they ignore leading up to that? Why would he be running from that? And what did, what happened in the postmortem to that that he seemingly is so, so determined not to let anyone know?"

Steve Doocy: "And the other thing, just, and we're going to talk more about this throughout the morning, is the fact that part of his punishment he cannot handle super secret documents for three years. In other words, in about a year and a half he can back in there with more scissors or a shredder and do the same stuff."