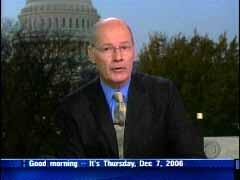 Co-host of CBS’s "Early Show," Harry Smith, highlighted the recommendations of the Iraq Study Group and his worries that they could be disregarded by the Bush administration, and may "end up with the dust bunnies." In the 7:00 half hour of Thursday’s program, Smith interviewed the co-chairs of the Iraq Study Group, former Secretary of State James Baker and former Democratic Congressman Lee Hamilton, and he also spoke with Illinois Senator Barack Obama. In both instances, Smith alluded to the fact that the Bush administration may not follow the Baker/Hamilton Commission findings.

During his segment with Secretary Baker and Congressman Hamilton, Smith lamented to Secretary Baker that the Iraq Study Group had spent months on its report, but it may be discarded by the president:

"Here's my concern, you've been working on this for months, you have this amazing bipartisan cooperation to come up with this document. You present it to the president yesterday. Maybe he has a book like this. What if it gets slid under the bed and ends up with the dust bunnies?"

Mr. Baker dismissed the notion as the nature of commissions, and asserted that the president could be enthusiastic about them, but Democrats on Capitol Hill could thwart the recommendations as well, "And suppose -- let's suppose he might respond to it in a bit more aggressively, but the Democratic majority on the hill doesn't vote reconstruction funds."

Smith continued his push for the implementation of the Iraq Study Group’s recommendations in the subsequent segment, this time in an interview with Senator Barack Obama. Smith neglected to ask Obama about what his plan for Iraq would be, but, rather, seemed more interested if Obama would take the Baker/Hamilton Commission’s recommendations more seriously than the current president:

"If you were the President of the United States, how seriously would you take these recommendations?"

Smith’s questions echoed this past week’s cover of "Newsweek" which asked "Will Bush Listen?" President Bush has said he will consider the suggestions made by the Iraq Study Group, but he will consider them along with recommendations he will receive from the Joint Chiefs of Staff and the National Security Agency. Just because the Bush Administration may not enact all of the Baker/Hamilton commissions ideas, does not mean he did not listen to what they had to say, and it does not mean he is not changing course.

On a different note, co-host Rene Syler misquoted comments made by Robert Gates, who was confirmed by the Senate as the next Secretary of Defense. In a brief anchor read Syler highlighted:

"It was Robert Gates' candor on Iraq that sealed his confirmation as Secretary of Defense. Gates was overwhelmingly approved by the full Senate Wednesday after testifying that the U.S. is losing the war. He'll be sworn in December 18th."

However, Gates never said the U.S. was losing the war. As noted by Harry Smith on Wednesday’s program:

"He said while we're not winning the war; he said we're not losing it either. That should be pointed out, away from the headlines a little bit."