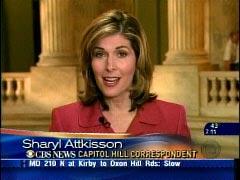 Friday’s "Early Show" analyzed the Democrat Party’s leadership election with CBS News Capitol Hill correspondent Sharyl Attkisson recognizing the failure of Speaker-designate Nancy Pelosi in her endeavor to replace her rival, Representative Steny Hoyer, with her friend, Congressman John Murtha, in the House Democrat Party leadership. Pelosi was compared to a head football coach who’s team revolted when the star quarterback was chosen. Attkisson also referenced Murtha’s questionable ethics, the only reporter of the network morning shows, CBS, NBC, or ABC, to do so on Friday.

In introducing the piece, co-host Hannah Storm noted that the leadership elections were mixed results for Speaker-to-be, Nancy Pelosi, and Ms. Attkisson began her report citing Pelosi’s failure to elevate her ally to the majority leader post:

"It's as if the new coach picked her star quarterback, but the team wouldn't have it. And the coach, Nancy Pelosi, was shocked."

Attkisson continued, declaring that Pelosi was not only rebuked by the Democratic caucus but that her public support of Congressman Murtha made for some uncomfortable moments among the Democrats:

"Selected by his [Steny Hoyer] colleagues, not Pelosi. She had taken the controversial step of endorsing Congressman Jack Murtha for Majority Leader of the House, her number 2. But in secret ballot voting, Democrats overwhelmingly rejected her choice, and the aftermath made for awkward moments. Pelosi spent more time extolling the virtues of the loser, than the winner."

Finally, Ms. Attkisson cited some reasons why Murtha lost the leadership race. She asserted that he is a big pork spender, and reminded viewers of the Abscam scandal:

"But he was saddled with a reputation as pork master and there's that little matter of him being an unindicted co-conspirator in the Abscam bribery scandal, caught on undercover FBI tape."

Attkisson’s piece was the only to mention Abscam. On NBC’s "Today" Norah O’Donnell portrayed Steny Hoyer’s victory as a defeat to Pelosi and the overall race between Hoyer and Murtha as a distraction to the party.

"House Democrats unanimously elected Nancy Pelosi as the first woman speaker of the House, but also handed her a defeat by electing Steny Hoyer over her hand picked candidate, John Murtha, as majority leader."

And the only coverage viewers of ABC’s "Good Morning America" received of the race was a ten second anchor read from Chris Cuomo:

"House Republicans vote on their leadership today. On Thursday, Speaker-to-be Nancy Pelosi was dealt her first defeat since the elections, and it came from her own party. Pelosi was pushing John Murtha for majority leader, but he was beaten by a vote of 149 to 86 by Steny Hoyer."

Nancy Pelosi has promised to run the most ethical and open Congress in the history of the United States, so why is it that only one of the networks believe it newsworthy to cite the questionable ethics of her choice to lead the House Democrats?