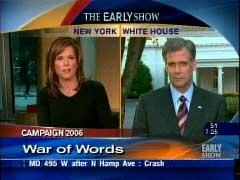 Wednesday’s "Early Show" on CBS highlighted Senator John Kerry’s disparaging remarks about the American military in three separate segments, but instead of expressing outrage at Kerry’s comments, CBS seemed more concerned that the Republicans may use them for political gain in the midterm elections. While CBS omitted mentions that some Democrats have refused to campaign with Kerry and others have asked that he apologize, the network pondered if the outrage expressed by Republicans was an effort to "fire up the base" or simply a "desperate" attempt to change the subject.

"...Is this an effort to get out the conservative, fire up the base and get the vote out in advance of next week's election?"

"Did John Kerry give the Republicans a gift or is the White House so desperate to divert attention from the failing policy in Iraq?"

Schieffer conceded this gaffe was a gift from John Kerry, but cautioned:

"Now, how far this goes and where it goes from here, it's hard to say. But at least they've [Republicans] managed to change the conversation for a day."

But who will play a role in determining where this story goes? The media, of course. Will they follow up their reports with news that Democrats have urged Kerry to apologize or have cancelled appearances with him? Apparently not as the only mention of this subject on this morning’s "Early Show" came from Tony Snow in replying to a question from Hannah Storm:

Hannah Storm: "Mr. Snow, some Republican candidates are distancing themselves from the president and his Iraq policy. Some of them are going so far as to call for Donald Rumsfeld's resignation. What does the president think of candidates in his own party making such a public break from the White House?"

Tony Snow: "You mean like the two Democrats who have cancelled appearances today with John Kerry? I think both guys understand that in a political season, people can make political decisions. What the president wants is a Republican Congress and he's doing everything he can to make sure that it stays that way."

Now it is reasonable to say Hannah Storm had no reason to bring it up as she was conversing with a member of the Bush administration regarding the administration policies and political outlook. But, why were these developments ignored by Bill Plante, Bob Schieffer, and Harry Smith?

With its coverage, omitting references to Democrats either refusing to campaign with Kerry or at the very least demanding he apologize, it seems CBS is offering a gift to the Democrats in ensuring that this is a one day story that has no repercussions.