We would’ve thought we had heard the last of Dear White People, a movie which followed black college students and their bouts with racism that eventually ended in a college riot. Back in 2014, it grossed just $4.4 million at the box office, putting it at #149 in box office for the year, under Meet the Mormons and Vampire Academy.

However, thanks to Netflix, they will be streaming an upcoming series based on the movie. One would think Netflix would be praised and applauded for streaming such a racially conscious series, but not so; Ever since Netflix dropped the trailer, they’ve received a lot of backlash because of it.

If there’s any indication as to WHY so much outrage over the series exits, just take a look at the trailer that recently dropped – it’s chock full of political correctness, cultural appropriation, and white stereotyping.

The trailer starts off with Logan Browning – the main character of the series – behind a DJ booth pontificating to “white people” what Halloween costumes could or should not be worn as they may be deemed inappropriate.  Footage stereotyping white fraternities and sororities (you know – the “preppy” white fraternities and sororities where guys wear khaki pants and pullovers and girls wear cardigans and pearls a la Legally Blonde.) The words “America needs a voice of reason” then appear with Logan staring “at you” as if she’s the voice of reason.

The next scene depicts African-American students stampeding a house party where they find white college kids are “culturally appropriating” black culture. The white kids are then chased out of their own house party.

Outraged yet? If so, you are definitely not the only one. Since dropping on February 8, the official Netflix trailer has accrued more than 4 million views on YouTube with over 51,000 of those views giving the trailer a thumbs up, but over 396,300 giving it a thumbs DOWN! And that’s as I am writing.

And of course, living in the age of hashtag advocacy, there’s even a #BoycottNetflix with people threatening to cancel their Netflix subscriptions (but then how will they watch Stranger Things?) as well as a racist tweet making the rounds of the film’s writer, Jack Moore, who said “Seriously, f**k white people” after President Donald Trump won the election. Maybe Mr. Moore was doing it for promotional reasons? 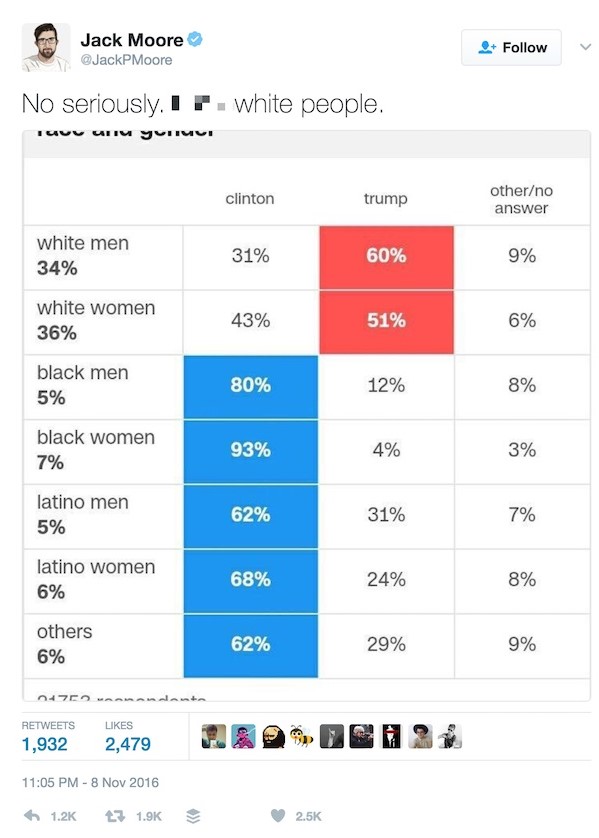 Meanwhile, Justin Simien the creator and director of Dear White People, maintains that he is not contributing to racial division with his controversial series:

I’m not the first artist to use a misnomer as a title and I reject any notion of ‘causing a divide’ simply by stating that one exists. Which is my role as artist. To state what is. But if facts and common sense can not wake us up from our delusions and distorted ways of seeing, what can?

I don’t know about you, but if a white director created a movie or TV series called “Dear Yellow People” or “Dear Black People” or “Dear Brown People,” I’m not so sure that director would be seen as an “artist.” Of course not – he/she would be viewed as a racist. The Grapevine reported Simien fought back some more on Twitter:

"A cursory Google search would confirm it has no racist intent. But that Google search is not embarked upon because they NEED it to be hate speech. They NEED to fight an enemy, lest they sit alone in their own pain. Feelings of being [passed] over by an evolving society...."

“Equality feels like oppression to the privileged, and thus, three benign words send them into a fight for their very existence, which happens to it actually not [being] in any real danger,” Simien wrote. “This is how a minute-long date announcement becomes a distorted call for white genocide in the minds of some people. Despite all signs to the contrary.”

The series arrives in April.