Panic at the Salon: Leftist Actress Chops Off Hair to Avoid Looking Like Mrs. Trump 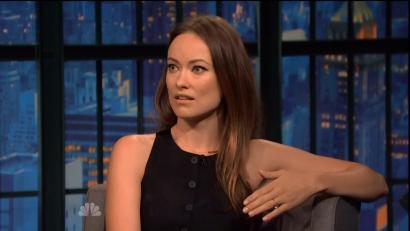 Celebrities are getting desperate after the Trump victory. Leftist actress Olivia Wilde –a huge Clinton supporter –believed her hair resembled Melania Trump’s and decided to debut a new haircut on Instagram with the hashtag, “#nomoremelaniahair.”

People magazine reported that because they had the same length of chestnut brown hair with highlights at the end, and often styled it the exact same way — with long, loose face-framing waves, Wilde believed she had “Melania Trump” hair. As if anyone without a huge ego would notice “hair twins.”

In addition to chopping off her long and luscious locks, Wilde is also part of another trend – by wearing a T-shirt full of safety pins to support minorities, women and anyone who felt unsafe during a Trump presidency and promoting the Women’s March on Washington the day after Trump’s inauguration.

It’s still unclear what women, minorities and anyone else has to fear under a Trump presidency, unless you count those disastrous haircuts some women have been getting to make political statements.

According to New York magazine, liberal women are taking it to the salon and making drastic changes to their hair in order to make a political statement against President-elect Donald Trump.

Heidi Mitchell gave a few detailed accounts on just how some women are deciding to make the cut, such as Julianna Evans who usually makes the trek to Washington D.C. from New York City  in order to her stylist to get her hair colored and trimmed. After the November 8 election, Evans “fell into a downward spiral” and “cried for three days” and decided to take it out on her hair when she noticed a few gray hairs:

“I felt like it was the worst thing, politically, that ever happened in my lifetime. It was catastrophic…Literally without thinking, I grabbed the Natural Black box by Garnier…I was like, f** it! The election deadened my soul. I think I wanted to do something defiant to feel stronger.”

Mitchell writes that November is usually seen as a slow month in salons, but not this year, according to Nicole Butler – a creative director and master colorist at Daniel’s Salon in Dupont Circle whom she interviewed. Butler said she received numerous bookings with at least three women a day asking for a completely new look – whether it be a new color or chopping off 6+ inches of hair. “Usually stuff like this is planned for weeks and put on the books after several consultations, but this was very spontaneous…It was like a mass declaration of independence.”