Another Tantrum? Ed Schultz Is Missing for His Final MSNBC Show

Did anyone tell Ed Schultz he missed his final episode on Friday?

The Ed Show was cancelled along with three other MSNBC shows, and although the entire gang was there for the last episode of The Cycle, and Alex Wagner had a few laughs at the conclusion of her show, Mr. Ed was nowhere to be found. The reason, MSNBC say it was due to “pre-existing scheduling conflicts.”  Somehow I don’t believe that. Instead, Michael Eric Dyson guest-hosted a forgettable last show from Miami.

Maybe Ed couldn’t deal with the reality of losing his low-rated show, maybe he was interviewing for another gig at a competing news channel, or MAYBE it’s because Mr. Ed has a hot temper. Remember in 2010 when Ed went ballistic over being left out of MSNBC promos about election coverage?  From Page Six:

The hot-tempered anchor of “The Ed Show” lost it during a phone call in the packed studio and slammed down the phone before exploding.

A witness told us, “Ed was furious the network was running election-night promos and he wasn’t in them. He’d been arguing on the phone with marketing, then he slammed down the phone and exploded. It was like Mel Gibson had entered the newsroom.”

A source told Page Six Schultz was reprimanded, told he would be fired if it happened again and “he broke down crying.”

If he broke down crying after being reprimanded and threatened of being fired, in some odd way it would make sense why he wasn’t there for his last episode. In the closing minutes, Dyson and leftist journalist John Nichols held a kind of memorial service for Schultz’s program: 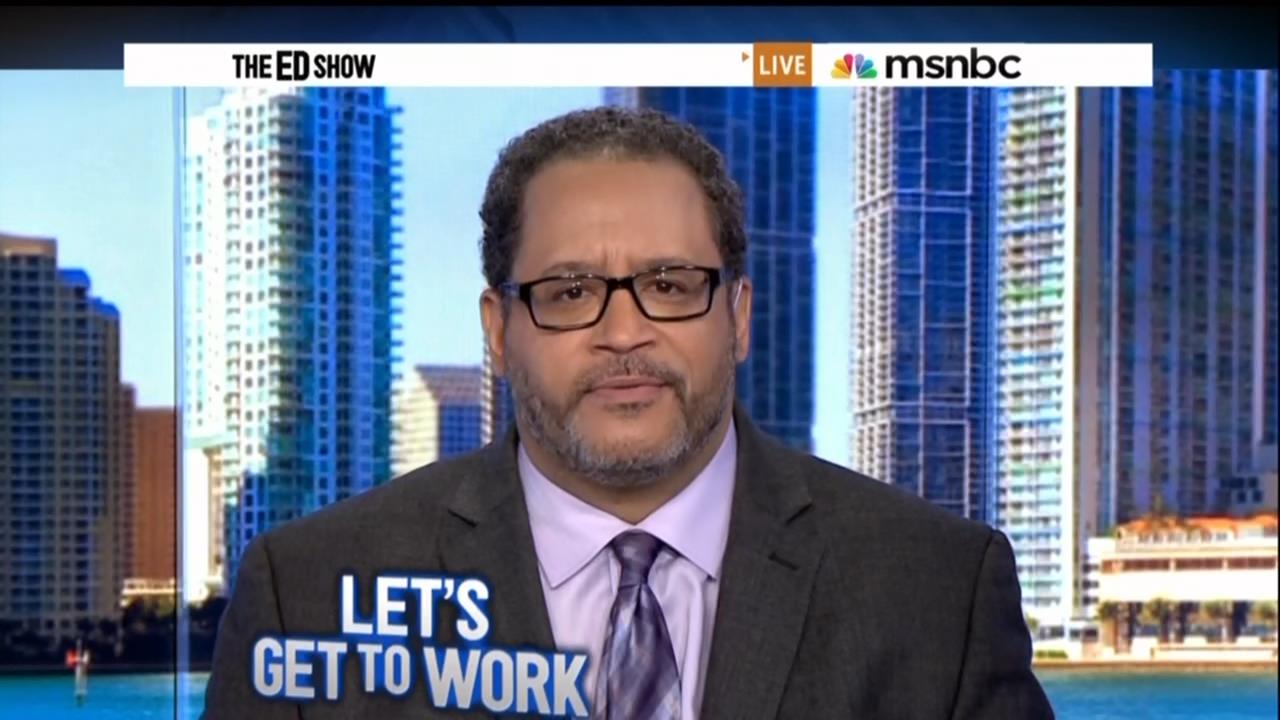 DYSON: So what has The Ed Show meant for middle class Americans over the last six years?

NICHOLS: I want to tell you something, my friend. This show has been an essential part of the struggle of working Americans to have their voices heard. And if this show wasn't around, I think some fundamental issues like trade policy would not have been explored as deeply as they need to be explored, but more importantly, as a Wisconsinite, I have to say that when the uprising came against Scott Walker and when some very brave teachers and farmers and snowplow drivers and nurses went out in the middle of the winter to stand up for workers` rights, Ed Schultz came and stood with them. And that was a pretty darn important thing. Perhaps one of the most important moments I`ve seen in American media.

DYSON: He's a big fellow with an even bigger heart. Now when he's given his life and devoted commitment to the causes of working class and middle class people. That`s something that`s pretty extraordinary in any class but especially among some of those talking heads out there.

Nichols also wanted to give Schultz credit for flip-flopping to the left-wing position on the Keystone pipeline:

NICHOLS: And I also want to say something, if I can, about Ed`s courage. He has had the courage over the years to do things that were hard. Most hosts like to be steady on what they've said. They don't change. They don't acknowledge that they are imperfect, but Ed Schultz, on the issue of the Keystone pipeline was a supporter of keystone and then via his viewers, his listeners and his guests, he began to evolve on the issue to recognize the environmental concerns that were in play but also the reality that Keystone didn`t deliver for workers in the way that some people had said it would.

And he made a fundamental change there, and so this guy who has stood up for workers has also stood up for the environment. He stood up on climate change. The fact of the matter is, you don`t find many people like that in media. You don't find many shows like this. This is a precious show that has meant a tremendous amount to an awful lot of working people and just an awful lot of Americans for whom there aren't a lot of voice, there aren't a lot of vehicles by which their concerns, their fears and their growth as human beings can be reflected in a show.