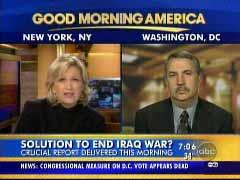 New York Times columnist Thomas Friedman declared that the insurgency in Iraq has been defeating the U.S. military for the past four years during an interview Wednesday with Good Morning America’s Diane Sawyer. While making the argument that there is no "two to three year" solution for the violence occuring in Iraq, Friedman declared victory for the insurgents:

Thomas Friedman: "...I don't believe myself that there's a two to three year solution where we just train a few more troops. The issue isn't training, Diane. After all, who's training the insurgents? Nobody. They're doing just fine. They've basically been defeating the U.S. military for the last four years."

Friedman also seemed to indicate that the reason Saddam Hussein was an "iron-fisted dictator," was not necessarily because of who Hussein is as a person, but because of "the way Iraq is":

While Friedman criticized many of the newly-released Iraq Study Group recommendations as "either unnecessary or impossible," he championed the ISG’s suggestion that the Americans and Iraqis meet with Iran and Syria to discuss potential solutions. Sawyer fretted over whether Iranian President Mahmoud Ahmadinejad would offer his country’s assistance to quell the violence in Iraq:

Sawyer: "But, Tom, a lot of people are saying that you can get to the insurgents and, again, Iran and Syria are the way to do it, our adversaries. It does strike me as an irony that these people in Iran, Ahmadinejad, we say, ‘you're the axis of evil, but would you come in and help us out of here?’ Will he help? Could he help? What could he do?"

Friedman argued that by declaring its intention to withdraw from Iraq, leaving Iran to deal with its troubled neighbor, the U.S. could gain leverage over Ahmadinejad:

Friedman: "Yeah. Well, I think he, he might help under one condition, Diane, that we tell him we're leaving. You see, right now we have no leverage over them. Basically, you know, they've got us over a barrel. And I think the only way we're going to have any leverage on them is simply to say, we are going, ok, which part of that sentence don't you understand? We are leaving. And that means you, Ahmadinejad, are going to inherit the chaos in southern Iraq, have a nice day. Only when you really face them with that choice, I think, will you get them off the dime."

Sawyer asked Friedman if it was a victory for America’s enemies if the U.S. withdrew from Iraq:

Sawyer: "But do our enemies, Ahmadinejad and the Iranians, win if we let them inherit that day?"

Friedman: "They sure do win. They, they win Iraq. What is second prize, Diane?"

The Times columnist sounded dour when asked by Sawyer for his prediction of the future for Iraq:

Friedman: "Basically, I'm not really optimistic. You know, before the war began, Diane, I, I wrote a column in which I said, you know, the big question about Iraq is that, is Iraq the way it is because Saddam was the way Saddam was or was Saddam the way Saddam was, this, you know, iron-fisted dictator, because Iraq was the way Iraq is? You know, I was hopeful that it was the former, but it's turning out to be a lot closer to the latter."

Sawyer took note of Friedman’s defeatist attitude and bleak outlook for Iraq during her conclusion of the 7:05 am interview: