CNN's Schneider on Feingold's Censure Motion: Why Not Impeachment? 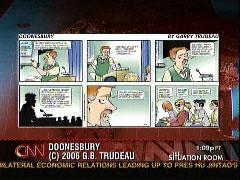 To paraphrase that famous George Santayana phrase, perhaps political reporters who highlight liberal efforts to embarrass the President on Friday are destined to find those same moves inadequate on Monday. Having awarded liberal Wisconsin Senator Russ Feingold with the "political play of the week" for his motion to censure President Bush on the March 17 The Situation Room, CNN senior political analyst Bill Schneider during today’s 4pm hour wondered why the senator isn’t proposing impeachment.

Bill Schneider: "Wolf, the philosopher George Santayana wrote those who cannot remember the past are condemned to repeat it. But sometimes that happens with those who remember the past all too well. Senator Russ Feingold’s motion to censure President Bush raises a question. If he believes the President broke the law, why isn’t the senator proposing impeachment?"

Schneider: "Democrats have not forgotten what the Republican Congress did to President Clinton. Gary Trudeau’s Doonesbury cartoon shows a college instructor asking students to consider the case of two presidents. Quote, ‘The first president initiates a bloody, costly unending war on false premises and approves covert policies of illegal detentions, kangaroo courts, extraordinary renditions, torture, and warrant-less wiretapping of thousands of Americans. The second president lies about hooking up with an intern. Question, which one should be impeached?’"