'Flag Spam,' the Preferred Tool of the Left's Web Censors 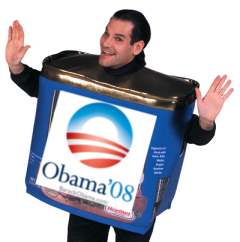 One of the hottest Internet videos during the mortgage and banking crisis has been a YouTube clip titled "Burning Down the House," which outlines the untold story of how liberal Democrats pressured banks and lenders to throw standards out the window and give money to people who couldn't pay it back.

Try watching it now, however, and you won't be able to, thanks to the growing problem of "flag spam," the practice of abusing online filter systems to squelch political speech with which one disagrees.

We've all seen spammers at work in our e-mail inboxes. Experts estimate that 90 percent of all e-mail messages nowadays are spam, or unsolicited commercial e-mail.

Luckily for most of us, the majority of it gets filtered out. That's caused the more sophisticated spammers to change course and target a more vulnerable part of the Internet - the hugely popular Web sites like YouTube, Digg and the blogosphere, where anyone can join the discussion by posting videos, essays, reviews and other content.

More and more people are flocking to these sites, a fact that makes them attractive to spammers. Seedy salespeople also love the interactive Web because it allows them to get their products ranked higher in search results, a 2-for-1 as it were.

Because of the proliferation of fake blogs, spam comments and phony videos, many interactive sites have added mechanisms to prevent a group discussion from being hijacked by allowing regular readers to "flag" things they come across that are offensive, obviously spam or violate copyright laws.

After enough complaints about a particular piece of content are raised, the "flagged" video or comment is removed from circulation and placed into a review system in which a pre-selected group of people review it and decide whether the reports are correct.

If the complaints are judged incorrect, the content is restored to the Internet. If not, it is kept out of public view.

It makes sense for Web sites to do this: They have the right to ensure that their sites aren't turned into free advertisements for unsavory companies, after all.

What is harder to support, however, is that many Web sites' flagging systems are themselves becoming targets of abuse - by malicious individuals intent on consigning the free speech of others behind the moderation firewall.

On this new frontier of free speech, it appears extreme liberals are the biggest offenders. Back during the presidential primaries, an entire group of blogs that refused to support Sen. Barack Obama in his quest to defeat Sen. Hillary Rodham Clinton for the Democratic nomination were wrongly labeled as spam and taken down.

The Google-owned YouTube seems to be the biggest battleground for flag spammers. Dozens of pro-life videos there have been marked as "offensive" or containing "mature content," usually without any merit whatsoever. In many cases, complaints of the video producers have fallen on deaf ears.

In the 2004 campaign, a popular commercial by comic director David Zucker (whose "American Carol" movie debuts this Friday) featuring an actor playing former Secretary of State Madeleine Albright engaging in comically naive behavior toward third-world dictators was flagged by angry liberals as "mature content." Unless you had gone through the trouble of registering for a YouTube account, you couldn't watch it.

In the face of such problems, many conservatives interested in video sharing have begun gathering to Eyeblast.tv, launched by my colleagues at the Media Research Center. Still in its beta stage, Eyeblast.tv is poised to get a lot of Web traffic if YouTube doesn't get its act together and take steps to prevent liberals from abusing its flagging system.

Fortunately for free speech, Google does realize there is a problem. At a meeting last month at the Republican National Convention, Google CEO Eric Schmidt (an adviser to the Obama campaign) told a group of conservative bloggers that YouTube has indeed been the target of flag spam.

"We don't know how to solve it right now," he told me afterward.

Two suggestions for you, Mr. Schmidt:

1.) Make sure that the moderators appointed to review complaints are politically diverse. This makes sense because in a lot of cases, something that is offensive to one person may not be to someone else.

For the sake of public debate, it makes sense to err on the side of free speech in these situations. A politically balanced moderation system will help with that.

2.) Keep a record of what things people flag. My guess is that perpetual flagging abusers always flag the same types of videos.

The more a user flags specific types of videos, downgrade the value of his/her complaints.

Implementing these safeguards (plus some real transparency on how the moderation process works) will greatly reduce the abuse of YouTube's content flagging system, and put an end to the not-quite inaccurate perception that YouTube is more friendly to liberals than conservatives.

More important, it will boost public confidence in the Internet as the best means of engaging in the political debate.

(Note: the original author of "Burning Down the House" has since uploaded a version using royalty-free music. It's in the link in my first paragraph.)

The preceding is a modified version of my Washington Times column last week.