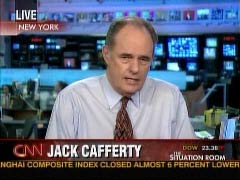 In an international version of the Obama-ABC dustup, two lawsuits have been launched against CNN over remarks made by crusty commentator Jack Cafferty criticizing the Chinese government as well as products made in China.

The first suit was filed in Beijing by 14 lawyers who allege that Cafferty "violated the dignity and reputation of the Chinese people," as Reuters puts it. The second was filed this week by a beautician and a schoolteacher for similar reasons.

Cafferty's remarks actually pale in comparison to things he's said in the past about Republicans and yet, demonstrating once again that it is the right that is the biggest defender of free speech, faced no negative repercussions. Here's Cafferty's original quote about China:

"We're in hawk to the Chinese up to our eyeballs because of the war in Iraq, for one thing. They're holding hundreds of billions of dollars worth of our paper. We also are running hundred of billions of dollars worth of trade deficits with them, as we continue to import their junk with the lead paint on them and the poisoned pet food and export, you know, jobs to places where you can pay workers a dollar a month to turn out the stuff that we're buying from Wal-Mart."

Compare that to what Cafferty said January 19th effectively accusing the Bush White House of releasing an Osama bin Laden video right before the 2004 election:

In the past, Cafferty has also insinuated that President Bush illegally colluded with oil companies to inflate prices, called for his impeachment and removal from office, dismissed social conservatives as caring about "crap" issues, and denounced former attorney general Alberto Gonzales as a "glorified waterboy" and a "weasel."