On Friday, Glamour magazine's Evelyn Wang marveled over a leftist's eyebrow-raising edit of the critically-acclaimed war film Saving Private Ryan. The activist created a two-minute-long "manfree" version of the Academy Award-winning movie in response to a "douche who edited all the women out of #TheLastJedi." Wang touted how "the new cut...has since achieved viral acclaim," and hyped the creator's "solid sophomore...edit of The Shawshank Redemption....Beautiful." 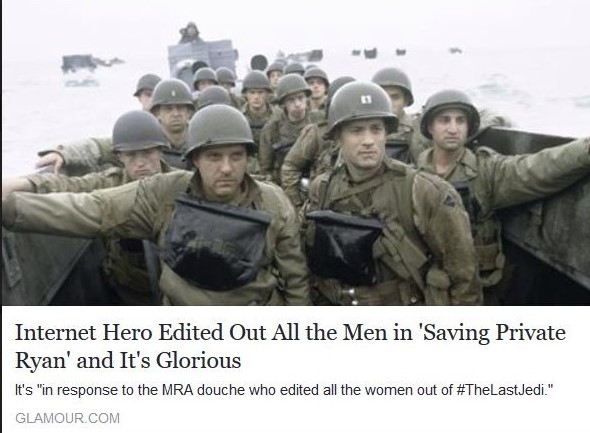 Wang first outlined that "Star Wars: The Last Jedi, as everyone knows, is a cinematic marvel...and guess what—almost all of its major characters were women and POC [people of color]. That last fact did not sit well with one man, however, who decided to show us all by spending a great deal of time and effort editing out all the women from the film." She underlined that the 46-minute-long edit, The Last Jedi: De-Feminized Fanedit, was "universally panned and mocked relentlessly by the director and cast."

The Glamour writer continued by noting that Smith "took things one step further and applied the same flawed logic to Saving Private Ryan." Wang identified the video editor as a "Twitter user...who's also behind the Twitter project @YesYoureRacist." However, she didn't explain the controversial nature of this social media account.

Back in August 2017, NPR covered how Smith had been "very active in posting pictures of white supremacists" who attended the notorious torchlit rallies in Charlottesville, Virginia. The public radio network admitted that the activist's posts on @YesYoureRacist were "ethically murky" (to say the least). The media outlet also turned to David Clinton Wills, a mixed-race professor at NYU, who condemned the practice: "Never in my lifetime did I remotely think I would vaguely defend the rights of a possibly very hateful person." Wills added, "It scares me to call that activism because it seems more like a certain condemnation and a certain judgment that ironically flies in the face of democracy itself."

Wang later included some of Smith's Twitter posts about his first "manfree" edit, and concluded with her effusive labeling of the leftist's Shawshank Redemption cut: "The new cut of Saving Private Ryan has since achieved viral acclaim, and Smith quickly followed up his breakout debut with a solid sophomore effort, a manfree edit of The Shawshank Redemption. This one is even leaner and slicker than the last, capping in at a minute and a half of run time. Beautiful."

As you might have expected, the post received some pushback on social media. Stephen Herreid tweeted: "Dear privileged, pampered, lazy 20-something internet users cackling maniacally as you erase the memory of 18-year-old heroes who were slaughtered in battle: Good luck convincing the rising generation that you're the good guys!"

Glamour's editorial staff responded to the outcry by adding a note at the end of Wang's piece: "Our intent here is in no way to discredit or erase the history of the brave men (and women) who fought for our country in World War II. Rather, we think this viral, tongue-in-cheek video was created in an effort to show how necessary it is to foster representation in film, especially when it comes to women's stories."