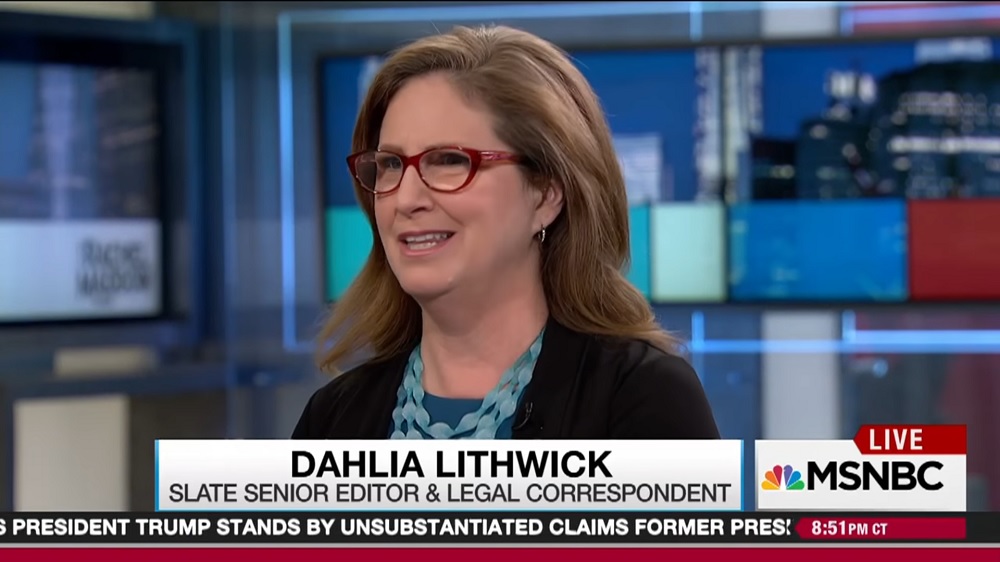 Dahlia Lithwick and Mark Joseph Stern hyped in a Wednesday item for Slate that "hard right" Supreme Court Justice Clarence Thomas's "fingerprints are all over" the Trump administration, due to the fact that many of his former clerks now hold "high places" there. Litchwick and Sterm played up that Thomas's "once-fringy ideas are suddenly flourishing," and touted that he is "close buddies with Rush Limbaugh...[and] fringe radio dogmatist Mark Levin."

The pair also bewailed that the justice "trained a small army of acolytes to implement his larger project of shrinking the regulatory state and fighting back against the supposed chokehold of political correctness."

Lithwick, a former Newsweek journalist, and her collaborator led their piece, "The Clarence Thomas Takeover," by noting that Justice Thomas has supposedly "spent more than 25 years staking out a right-wing worldview that can generously be described as idiosyncratic." After summarizing his "extreme position" on the Court, they underlined that the conservative jurist, who "spent his career teetering off the right edge of the federal bench, finds himself at the center of the table." They soon added that "Thomas is more than just the Trump administration's philosophical hero. His once-fringy ideas are suddenly flourishing—not only on the high court, through his alliance with [Justice Neil] Gorsuch, but also in the executive branch."

The Slate writers departed from past liberal attacks on Thomas as an empty "vessel." Instead, they spent the bulk of their item portraying the Supreme Court justice as a diabolical genius. They first outlined that "Donald Trump's crude understanding of the United States government aligns startlingly well with Thomas' sophisticated political worldview....Thomas is a thinker and Trump is a feeler, but together they have arrived at similar conclusions. They want less government, a more authoritarian executive, more God, fewer racial entitlements, and more guns."

Lithwick and Stern continued by spotlighting Justice Thomas's "small army of acolytes" in the Trump administration:

The pair emphasized their point about the conservative's "army" by citing longtime Thomas critic Jeffrey Toobin: "[I]t's easy to see that an enormous number of Thomas protégés are stepping into positions of immense power. Every expert we spoke to, among them the New Yorker's Jeffrey Toobin, agreed the Trump administration has brought on a striking number of Thomas clerks." They zeroed in on three former clerks in particular  — Jeffrey Wall, Neomi Rao, and Allison Eid. The writers devoted several paragraphs to highlighting Wall's defense of President Trump's travel ban; Rao's work "criticizing the administrative state;" and Eid's possible role as a "critical ally in his [Thomas's] fight for ever-more entanglement between church and state," if she is confirmed to 10th Circuit Court of Appeals.

Later in their item, Lithwick and Stern emphasized that "Thomas, who has described his clerks as his 'little family,' sees them as trainees in a very specific ideological program. He famously invites them to watch The Fountainhead at his home each year and has taken them on annual trips to Gettysburg to reflect on what he views as the conservative lessons of the Civil War." They also pointed out that "while Thomas is famously one of the most personable justices on the high court—the stories of his generosity to former clerks and court staff are myriad—he has also cultivated a with-us-or-against-us mindset that owes more to AM radio than George Will, and that maps perfectly onto Trump's Fox News–inflected worldview."

The Slate writers concluded their opinion piece by asserting that "Thomas stands as a symbol of what a faltering, lawless Trump may yet accomplish...At the precise moment in which the more than 120 vacancies on the federal courts may be the only reason for conservatives to hold their noses and stand by Trump, it's Clarence Thomas who stands as a living embodiment of wars already won and triumphs yet to come."