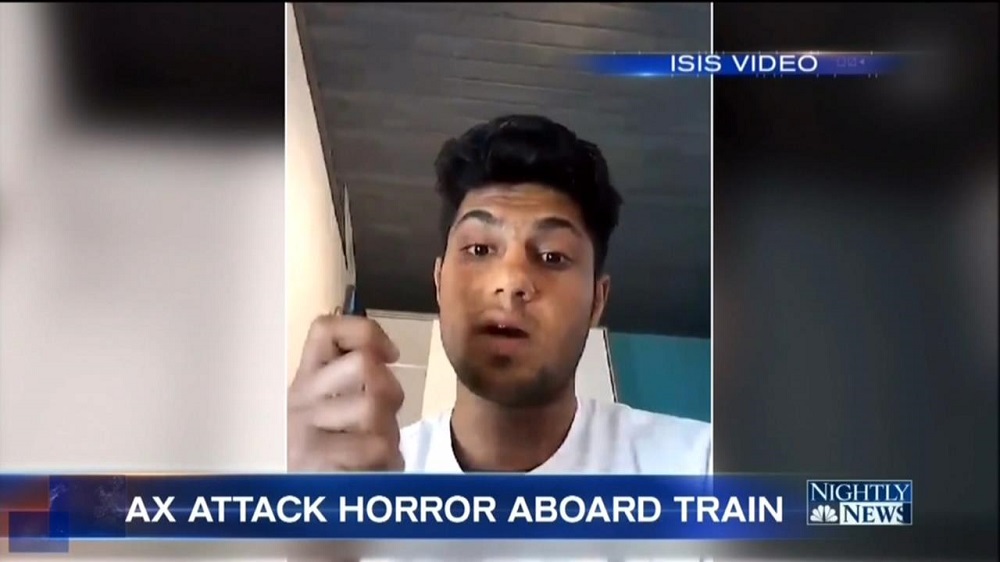 On Monday and Tuesday, CBS Evening News failed to cover the ISIS-inspired knife and ax attack by an Afghan refugee on train passengers in Germany.  Instead, the newscast ended on Tuesday with a full report on the celebrities who condemned Donald Trump for walking out to Queen's "We Are The Champions" at the Republican National Convention on Monday. To their credit, NBC Nightly News covered the Islamist terrorism with a brief on Monday and a full report on Tuesday. ABC's World News Tonight finally covered the story with a brief on Tuesday. [video below]

Lester Holt teased correspondent Bill Neely's report by highlighting the "ax attack horror aboard a busy train — a young man goes on a rampage — randomly slashing passengers — calling himself an ISIS soldier." Seven minutes later, he specified that the malefactor was "an Afghan teenager...slashing passengers at random."

Neely reported during the one minute and 19-second segment that the "17-year-old promised a suicide mission" in a video posted by ISIS after the attack. He noted that the terrorist cried, "God is great!" during the slashing spree, and that "police found a handmade ISIS flag, and a letter he'd written suggesting he had been radicalized recently." The NBC journalist also pointed out that the perpetrator "lived at this center with other refugees, after apparently traveling alone from Afghanistan last year."

DAVID MUIR: We turn overseas tonight, and ISIS is now taking responsibility for a bloody attack in Germany. Officials in Bavaria say a 17-year-old asylum seeker from Afghanistan struck train passengers with an ax and a knife, injuring five people, before he was shot dead by police last night. And today, a video now surfacing, allegedly showing the attacker threatening further ISIS attacks.

CBS News posted an online article on Tuesday about the "17-year-old Afghan asylum seeker who shouted 'Allahu akbar' ('God is great') during an ax and knife attack on a train" in Bavaria. The unsigned report disclosed that in his video, "the young man calls on others to 'kill these infidels in the countries that you live in.' 'You can see I have lived in your own home and have planned to behead you in your own territory,' the young man says in Pashto while brandishing a knife." However, none of these details made it onto their evening newscast. CBS This Morning did air a 19-second news brief on the attack on Tuesday.

The full transcript of Bill Neely's report from the July 19, 2016 edition of NBC Nightly News:

LESTER HOLT: Tonight, we're learning new details about a terrifying attack on a busy train — an Afghan teenager, pledging allegiance to ISIS, armed with an ax and a knife and slashing passengers at random, as first responders rushed to save people inside.

NBC's Bill Neely on the horror in Germany.

BILL NEELY (voice-over): Holding a knife and calling himself an ISIS soldier, this 17-year-old promised a suicide mission. Then, with an ax and a knife, he randomly slashed passengers on a train — shouting, 'God is great!' Five people were badly injured before he was shot and killed. German intelligence say he made no direct contact with ISIS — though, in his apartment, police found a handmade ISIS flag, and a letter he'd written suggesting he had been radicalized recently. He lived at this center with other refugees, after apparently traveling alone from Afghanistan last year.

It's just the latest terror attack stunning Europe. From the man near Paris, who stabbed to death two police officers last month; to the truck driver in Nice, who killed 84 people — killers who appeared from nowhere — for intelligence agencies, attacks that are almost impossible to predict or prevent. Bill Neely, NBC News, London.